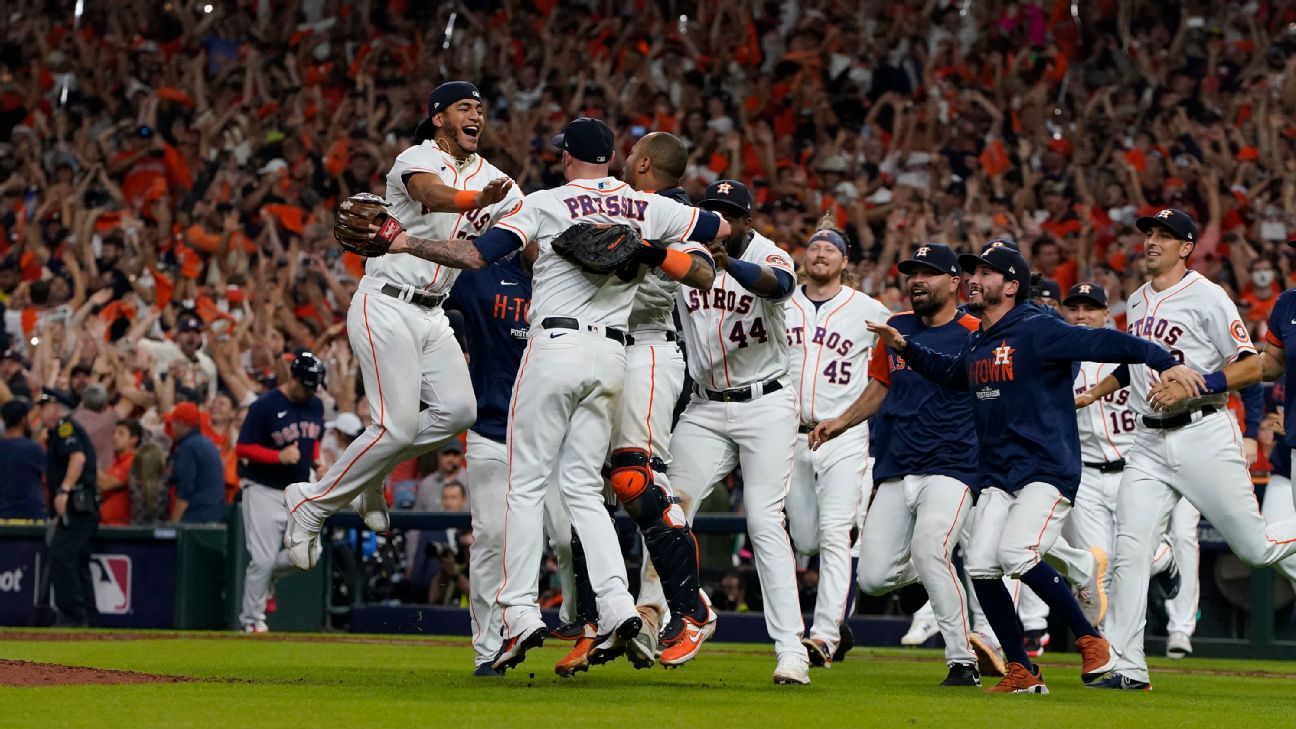 HOUSTON — The Houston Astros are headed to the World Series for the third time in five years after yet another pitching gem, beating the Boston Red Sox 5-0 in Game 6 of the American League Championship Series on Friday night.

Houston won the final three games of the best-of-seven series to clinch it.

Two nights after lefty Framber Valdez threw eight shutout innings, rookie righty Luis Garcia was nearly as good, giving up just one hit over 5 2/3. He left after Kike Hernandez hit a two-out triple in the sixth.

The biggest moment of the game came in the top of the seventh with two on and one out for the Red Sox, who were down 2-0. Facing reliever Kendall Graveman, pinch hitter Travis Shaw struck out on a 3-2 pitch as Alex Verdugo took off from first base. Astros catcher Martin Maldonado threw Verdugo out as Minute Maid Park erupted for the strike ’em out, throw ’em out double play.

The crowd erupted again an inning later when Kyle Tucker put an exclamation mark on the night with a three-run, opposite-field home run.

The hitting star of the series was Astros designated hitter Yordan Alvarez, who had two doubles, a triple and a single in Game 6. Alvarez, who was named ALSC MVP, drove in a run and scored twice as he hit .522 over the six games. His 12 hits are tied for the most in a playoff series in franchise history, and his seven opposite-field hits are tied for the most by any player in a postseason series over the past 15 seasons.

The Astros scored 45 two-out runs in the series, easily the most in a postseason for a team before the World Series. But the key to the victory was Houston’s dramatic turnaround on the mound. After giving up 25 runs in the first three games, while dropping two of them, Astros pitchers allowed just three runs in the final three games.

Garcia was just the latest to dominate. He made a mechanical adjustment after leaving his last start with knee discomfort and the results were astounding. According to research by ESPN Stats & Information, he threw 44 pitches 95 mph or harder, the most in any game in his career. His previous high was 16, accomplished in last year’s postseason.

The win returns Astros manager Dusty Baker to the Fall Classic for the first time since 2002. The 18 years between World Series appearances is the second most behind Bucky Harris, who went 21 years apart.

The Astros will face either the Los Angeles Dodgers or Atlanta Braves, who play Game 6 of their series on Saturday. Atlanta leads 3-2. If the Braves win the series, Houston will get home-field advantage with Game 1 set for Tuesday. Otherwise, the series will open in Los Angeles.

MLB playoffs 2021 – Love them or hate them, the Houston Astros are really this good