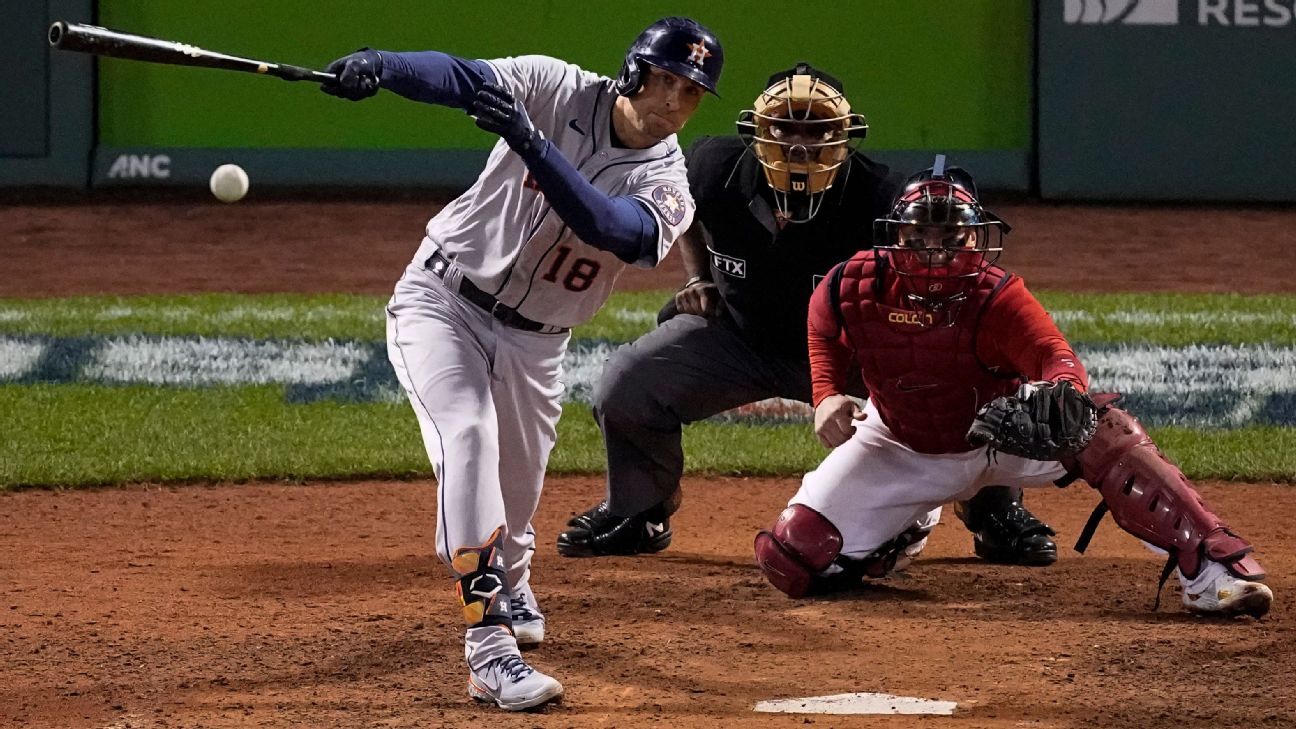 BOSTON — By numbers alone, the 268th pitch in Game 4 of the American League Championship Series wasn’t particularly noteworthy. It left Nathan Eovaldi‘s hand at 80.4 mph and descended more than 4 feet on the way to Christian Vazquez‘s glove. It spun at less than half the rate of Eovaldi’s average curveball. It didn’t move much side to side. Had he thrown it at any other point in the game, to any other batter, in any other situation, it would’ve been just another pitch.

In an alternate universe, or at least one that follows the rulebook strike zone, the pitch was a strike, a strike would have ended the ninth inning and allowed the Boston Red Sox, owners of two walk-off hits this postseason, the opportunity to mint a third. In the real world, where the rulebook strike zone is a castle in the sky, the pitch was a ball, a ball that kept Jason Castro at the plate, a ball that preceded the 269th pitch of the night, which he fouled off, and the 270th, which he whacked for a go-ahead single that opened the floodgates of the Houston Astros‘ 9-2 victory at Fenway Park on Tuesday night.

It is a pitch that was lamented inside the park and in text chains connecting Red Sox fans who were hungry for a commanding lead but were left with a series tied and home-field advantage lost. A pitch that Eovaldi was so certain was a strike he skipped off the mound, maybe believing he had done his job and maybe trying to cajole the home-plate umpire, Laz Diaz, into punching out Castro, because he, like everyone, knew pitch No. 268 was on the edge of the strike zone, which isn’t really a zone inasmuch as it is a concept subject to the execution of the man enforcing it. A pitch that, if Game 4 winds up as the detour that sent this series sideways for the Red Sox, will live in infamy in these parts as the strike that wasn’t.

Well, yeah. Though to characterize Game 4 as one won or lost by pitch No. 268 ignores the 267 prior to it — the ones that could have been something else, even a hit on any of the eight hitless at-bats with runners in scoring position for Boston — and the untold number after it in the sliding-doors version of this game. It was far from guaranteed that the Red Sox would win in the ninth or hold the Astros’ dangerous lineup scoreless in the 10th and beyond.

Home-plate umpire Laz Diaz has missed 21 ball-strike calls tonight, according to @ESPNStatsInfo. That is the most of any umpire this postseason. The green dot in the upper RH corner is the Eovaldi curveball that would’ve ended top of the ninth with the score 2-2.

And yet because Diaz called an objectively questionable zone — strikes for balls, balls for strikes, two pitches in almost identical locations with one a ball and the other a strike — it left the 268th pitch as the natural end to a night that reminded a truth worth acknowledging at the same time as Boston treats lazdiaz as its newest curse word: Even a human being with an incredibly well-tuned eye can have trouble tracking balls traveling at 80 mph and breaking 4-plus feet. Or dropping 5 feet and sweeping nearly 2 feet across, as pitch No. 193 of the night did. Or sizzling at 94.6 mph and winding up outside, as pitch No. 109 — a called strike three on J.D. Martinez that left Cora fuming — did.

Cora was working three levels with his postgame approach. First: He knows Diaz, has known him since he played at the University of Miami and Diaz umpired his games. Next: He doesn’t want to get fined for criticizing the umpires, because he is smart and likes money. Most of all: Blaming the umpires — blaming one pitch — is a losing mentality. Cora expects an immense amount of accountability from the players in the Red Sox clubhouse. He holds himself to that same standard, and he did just that in the aftermath of the game, at which point he took blame for using Eovaldi, who had started Game 2 on Saturday, in the ninth inning of a tie game.

Still, when Cora watches replay of pitch No. 268, here is what he will see: Castro waggling his bat, Eovaldi perched like a crane before he extends more than 6 feet off the rubber and releases the pitch, the ball bending over the outside corner at Castro’s belt, Castro buckling, Eovaldi hop-skipping and Diaz emerging from his crouch with his hands on his hips, which is really all that needed to be said.

On the Fox broadcast’s pitch tracker, the landing spot of the ball was colored in — meaning it was a strike. On MLB’s website, the pitch landed on the edge of the zone — a strike. Neither of those matters. The only computer that mattered was Diaz’s brain — and it processed the pitch as a ball.

Surely Diaz didn’t know that of Eovaldi’s 48 strikeouts this season with a curveball, only seven had been looking, none of those in the postseason. Nobody has a filthier repertoire — a 100-mph fastball, a biting slider, an obscene splitter, a tempestuous cutter and a curve that’s there almost as a palate cleanser for the bad taste all those other pitches are subject to leave. There are few tougher pitchers to umpire. The scene was set before pitch No. 268 before anyone realized it.

How it will live on in Red Sox lore depends on what happens next, much in the same way how it registered in this game depended on what happened next. If Castro had rolled over the fastball instead of fouling it off. If Castro had swung over the splitter instead of lacing it up the middle. If either had happened, pitch No. 268 is just pitch No. 268, a bad call on a night in which Diaz made 23 of them, but not the impetus behind Wikipedia graffiti and screams for robot umpires.

If it’s little more than a one-game impediment to the Red Sox rolling onto their fifth World Series appearance in 18 years, it’ll be forgiven if not entirely forgotten, because up here they forget nothing. But if the alternate outcome comes to fruition — if the Astros avenge their loss to Boston in 2018 — the 268th pitch of Game 4 of the 2021 ALCS will join the phantom tag of the ’99 ALCS and Ed Armbrister’s interference in the 1975 World Series in the pantheon of Red Sox postseason umpiring what-should’ve-beens.

Not the sort of third strike Boston was looking for.