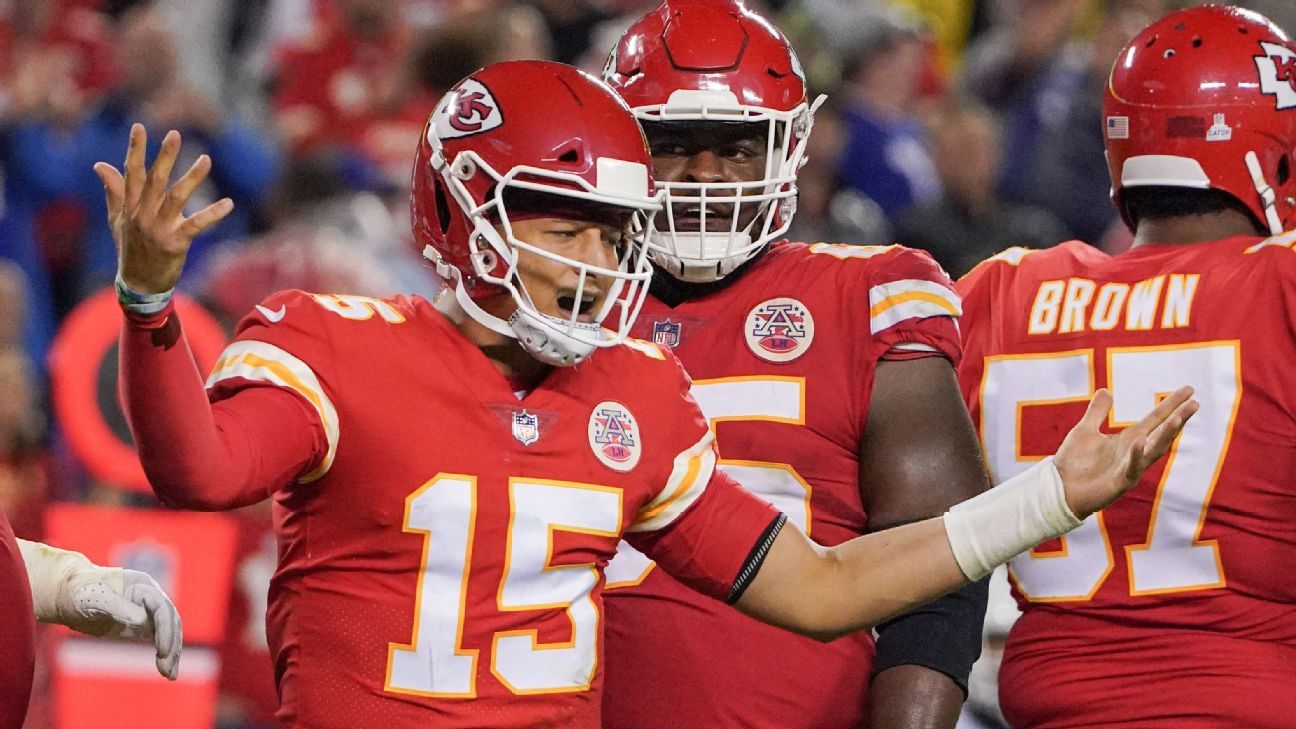 Through five weeks, the NFL is starting to take shape and it seems as though we have a clearer picture of which teams are true contenders and which teams are merely knocking on the door. Consequently, the futures market reflects this perception, even though the playoffs do not begin for another three months.

The Chiefs fell flat in the weekend’s biggest game and now find themselves under .500 at 2-3. It’s nearly impossible for us to envision these struggles to continue, given we have only seen them succeed with an MVP at quarterback that’s coming off back-to-back Super Bowl appearances. While I realize things can change and their next three opponents are Washington, Tennessee and the Giants, the Chiefs defense is atrocious and that likely will prove insurmountable. The fact that they only have the third-shortest odds at +750 is wild. I cannot recommend a play. Remember, the “Super Bowl hangover” has been proven over time. The 1972 Miami Dolphins and 2018 Patriots are the only teams to lose a Super Bowl and win it the following season.

A week ago, in this very space, I explained how 20/1 odds seemed like a strike price for an emerging Los Angeles Chargers squad. Following a home win over Cleveland, the Chargers now have 16/1 odds. I still think it’s an attractive price for two reasons. First, following that third loss, Kansas City sits two full games back and lost the first meeting with L.A. at home. Second, the Bolt travel to Baltimore on Sunday and then have a favorable schedule remaining, all things considered.

What if the resurgent Dallas Cowboys defense is legitimate? It’s hard to constantly dismiss it, just because of last season’s shortcomings on defense under a different coordinator that was constantly put in difficult situations by an offense that had lost star QB Dak Prescott to injury. Dallas is the only NFL team this season that’s 5-0 ATS and sure seems like an intriguing play at 14/1 odds. The Cowboys are now favored by four points in New England. Yes, Mike McCarthy is laying more than a field goal at Bill Belichick. Before the season, the Pats were a short a home favorite of about one point.

As I predicted, Buffalo’s win moved Josh Allen into serious MVP consideration. He’s now a betting co-favorite with Kyler Murray at +500. I just cannot pull the trigger on either or any of the other top five players: Tom Brady, Prescott and Justin Herbert.

I wouldn’t blame anyone for backing NFC quarterbacks Aaron Rodgers or Matthew Stafford at 11/1 odds. Their teams, the Green Bay Packers and Los Angeles Rams, are tied with the Tampa Bay Bucs with one loss and are just a game back of undefeated Arizona. The question is whether one of them can lead their team to the one-seed. Personally, I would wait longer to see if I can anticipate more outcomes and then try to find value in this one-way betting market.

Other awards to watch 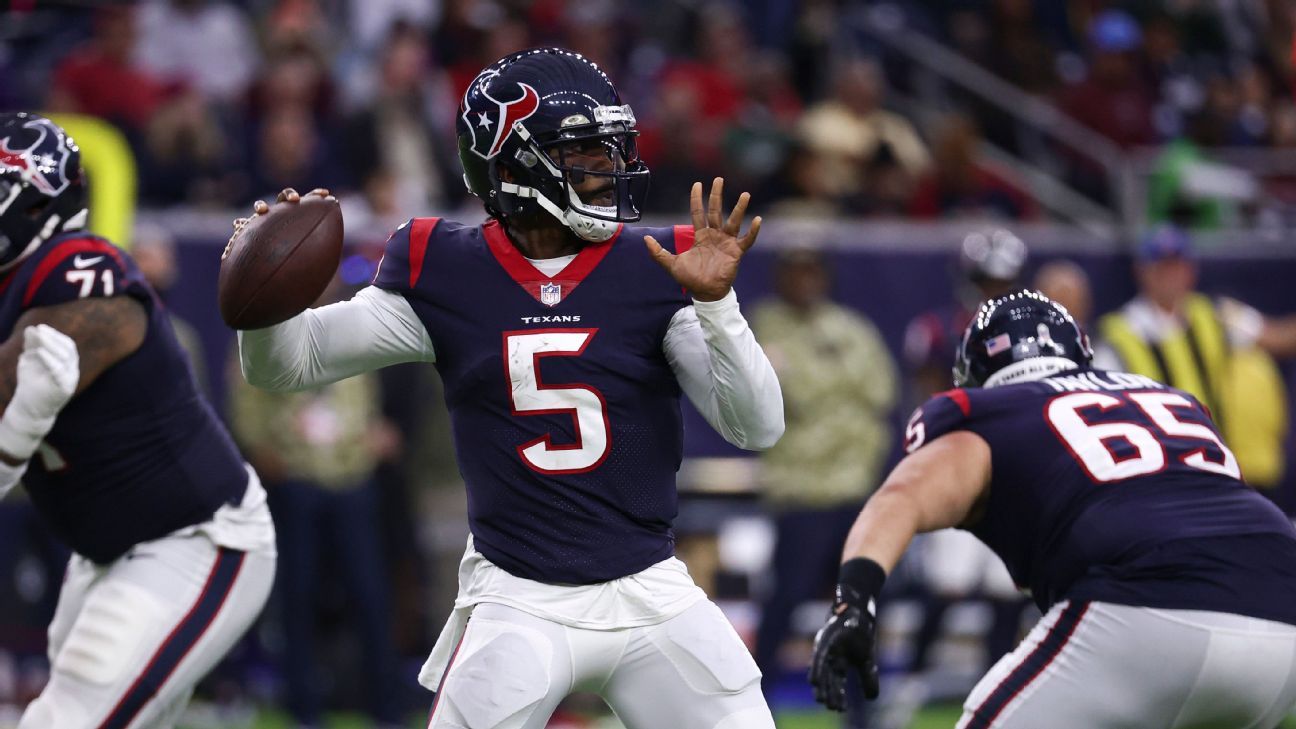 The Week 13 slate is highlighted by the Buffalo Bills hosting the New England Patriots on Monday Night Football. New England has won and covered six straight games to take over first place in the AFC East. Buffalo still enters the week as a slight favorite to win the division at -125.

Both teams are looking up at the Baltimore Ravens in the AFC standings. Baltimore visits Pittsburgh in the largest home underdog spot in Ben Roethlisberger’s career.

Meanwhile, the NFL’s top team, the Arizona Cardinals, look to improve to 7-0 both outright and ATS on the road as they visit the Chicago Bears. Arizona can become the third team in the Super Bowl era to win seven straight road games by double digits.

Teams to be underdog in every game: Detroit, New York Jets

Co-hosted by Joe Fortenbaugh and Tyler Fulghum, Bet is available for live and on-demand viewing on the ESPN App and on ESPN’s social media feeds on YouTube, Facebook and Twitter. Watch 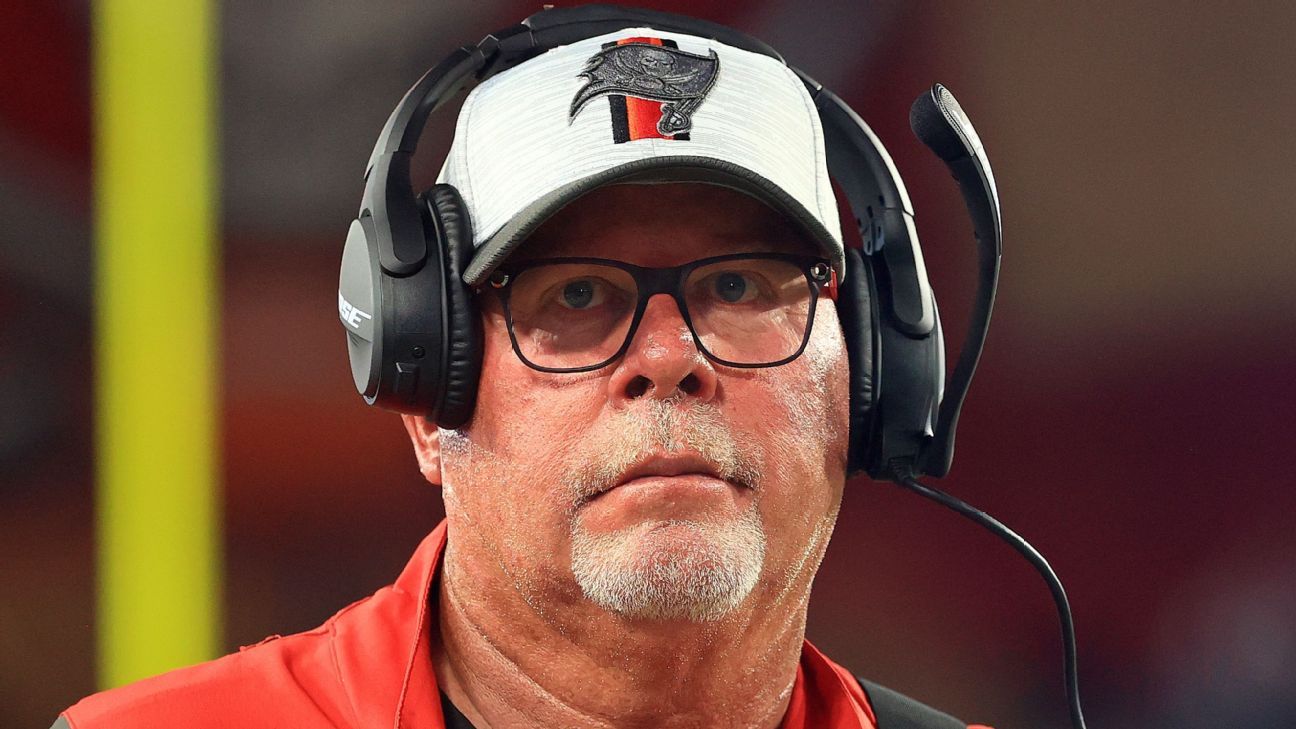 TAMPA, Fla. — Buccaneers coach Bruce Arians said Friday that he believes the NFL needs to take a closer look at other teams after two of his players — Antonio Brown and Mike Edwards — and one former player, John Franklin III, were found to have provided fake vaccination cards.

“We’ve done everything. There’s a lot more to that story. I just hope they don’t stop looking,” said Arians, who said two weeks ago that he had no reason to believe Brown or any player falsified their vaccination status.

But an NFL investigation revealed that the three players presented the team with fake vaccination cards, resulting in a three-game suspension. Carrying a fake vaccine card is also considered a federal crime and punishable by up to five years in prison.

When asked if he believes there are other issues throughout the league, he said, “Maybe.”

The NFL told ESPN on Thursday that there are no plans to alter how teams collect and vet vaccination cards. A big reason for that is because 80% of the 94.5% of vaccinated players were vaccinated at team facilities, according to league spokesperson Brian McCarthy, minimizing the potential risk for falsification. The NFL will continue to rely on teams to inspect vaccine cards.

The NFL also did not levy any sort of fine on the Buccaneers, unlike previous team COVID-19 violations, such as a $500,000 fine issued against the Las Vegas Raiders last year or the $300,000 on the Green Bay Packers recently, believing they too were misled about the players’ vaccination statuses, a source told ESPN.

Arians also defended his team’s handling of the virus.

“In the last two years, I don’t know if there’s been a team better at COVID than we’ve been. This is a setback because of what happened. But we have done an amazing job, and even when the guys — we have never had an outbreak in a position room. So I’m very happy with that part.”

He expressed anger over the players’ decisions after the team worked hard to keep the virus out of the building. The team’s mantra all last season was “beat the virus” and the organization has long credited their approach to handling the virus as a key reason why they won the Super Bowl.

They were even praised by President Joe Biden during a ceremony at the White House this summer for their approach to handling the virus, which included vaccinating 200,000 members of the community.”

Arians said the team will treat both Brown and Edwards as injured players and will not address their respective futures with the team until after they return. Brown is nursing an ankle injury that will keep him out for at least another two weeks, sources told ESPN, while Edwards is dealing with a knee injury. 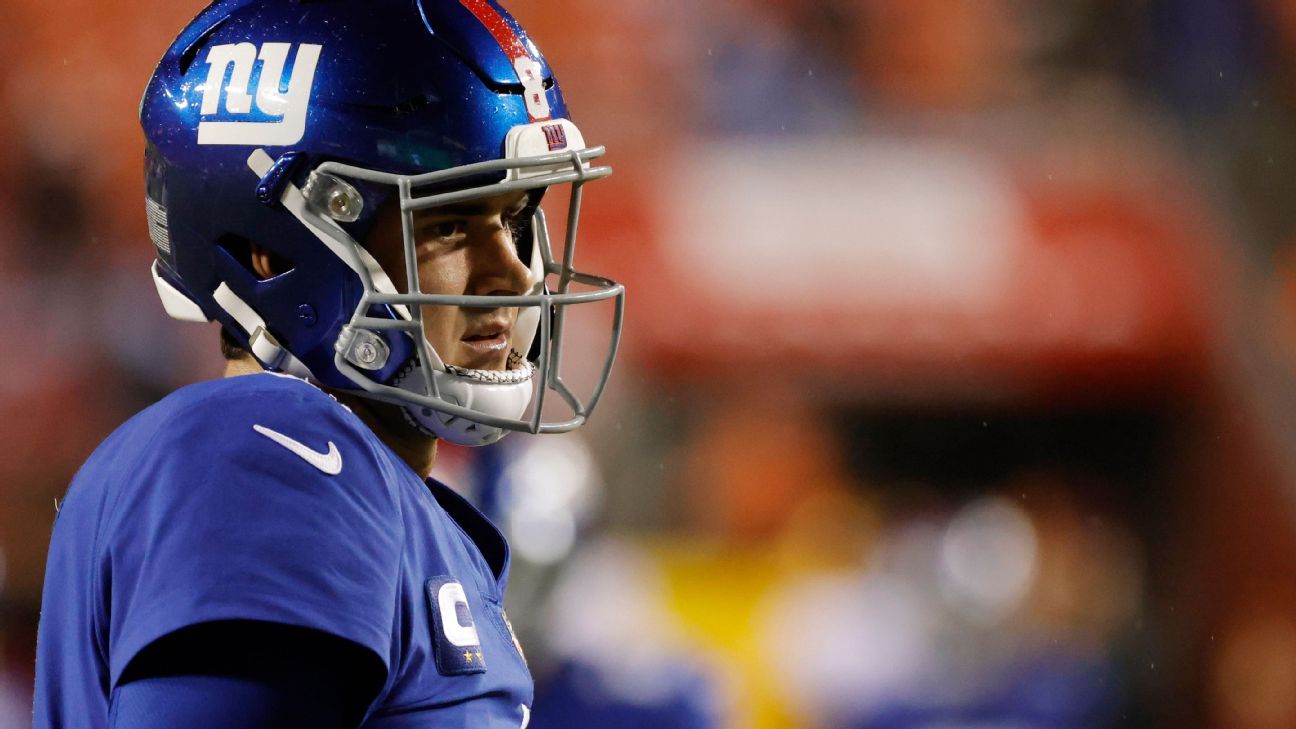 Jones has not been cleared for contact after suffering a neck strain during last week’s win over the Philadelphia Eagles. Jones was believed to be injured while running the football on the second play, but he said there wasn’t really soreness until after the game.

“At this point he has not been cleared for contact, so we’re going to go ahead and hold him out of this game,” Judge said. “At this point, we don’t feel 100% comfortable with him until the medical team clears him fully, so as of right now we will rule him out.”

“We will evaluate him for the future, including as soon next week, with the doctors,” Judge added. “We don’t have any answers as of yet.”

Mike Glennon is set to start in Jones’ place. Glennon went 0-5 as a starter for the Jacksonville Jaguars in 2020. His last win as a starting quarterback came during the 2017 season with the Chicago Bears.

Jake Fromm, signed by the Giants this week off the Buffalo Bills‘ practice squad, will back up Glennon.

This is the third straight season that Jones has been forced to miss a game late in the season. He missed time with a high ankle sprain as a rookie and for a hamstring injury in 2020.

Jones, 24, has completed 64.3% of his passes for 2,428 yards with 10 touchdowns and seven interceptions this season. He also has rushed for 298 yards and two touchdowns.

Glennon, 31, went 16-of-25 passing for 196 yards with a touchdown and two interceptions while playing in a blowout loss to the Dallas Cowboys on Oct. 10.

Information from ESPN’s Jordan Raanan was used in this report.