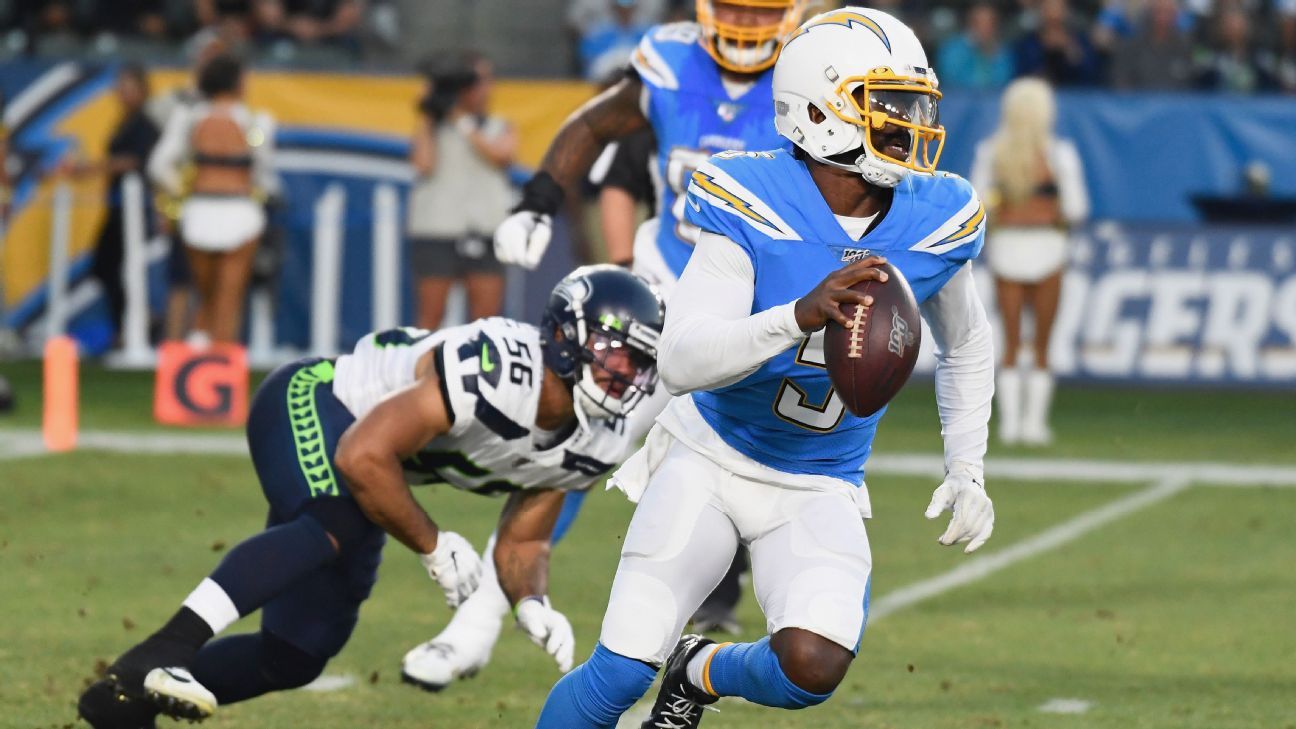 HOUSTON — Speaking to the media for the first time since he signed with the Houston Texans in March, quarterback Tyrod Taylor did not dance around the fact that he expects to be the team’s starting quarterback this season.

“But the opportunity to be able to start here is something that I look forward to.”

Taylor said when he signed with the Texans, he wasn’t sure whether he would be Houston’s starting quarterback, but that he “knew that it was an opportunity for me to be able to showcase what I can do.”

Taylor’s one-year deal is worth up to $12.5 million. He signed with the Texans on March 16, the same day the first lawsuit was filed against Watson.

Prior to the lawsuits, Watson had requested a trade. He has not reported to the Texans’ voluntary OTAs this spring. During the first week of the Texans’ organized team activities, head coach David Culley declined to comment on whether Watson was in attendance or taking part in the team’s Zoom meetings.

Since the first lawsuit was filed against Watson, Culley has said he has “nothing to say” about Watson’s situation.

Taylor, who signed a two-year, $11 million deal with the Chargers in 2019, was named the starter last season. However, he only started one game before a team doctor accidentally punctured his lung with a pain-killing shot while attempting to treat a rib injury before a Week 2 game. He was replaced in that game by quarterback Justin Herbert, who kept the starting job and went on to be named the NFL’s Rookie of the Year. 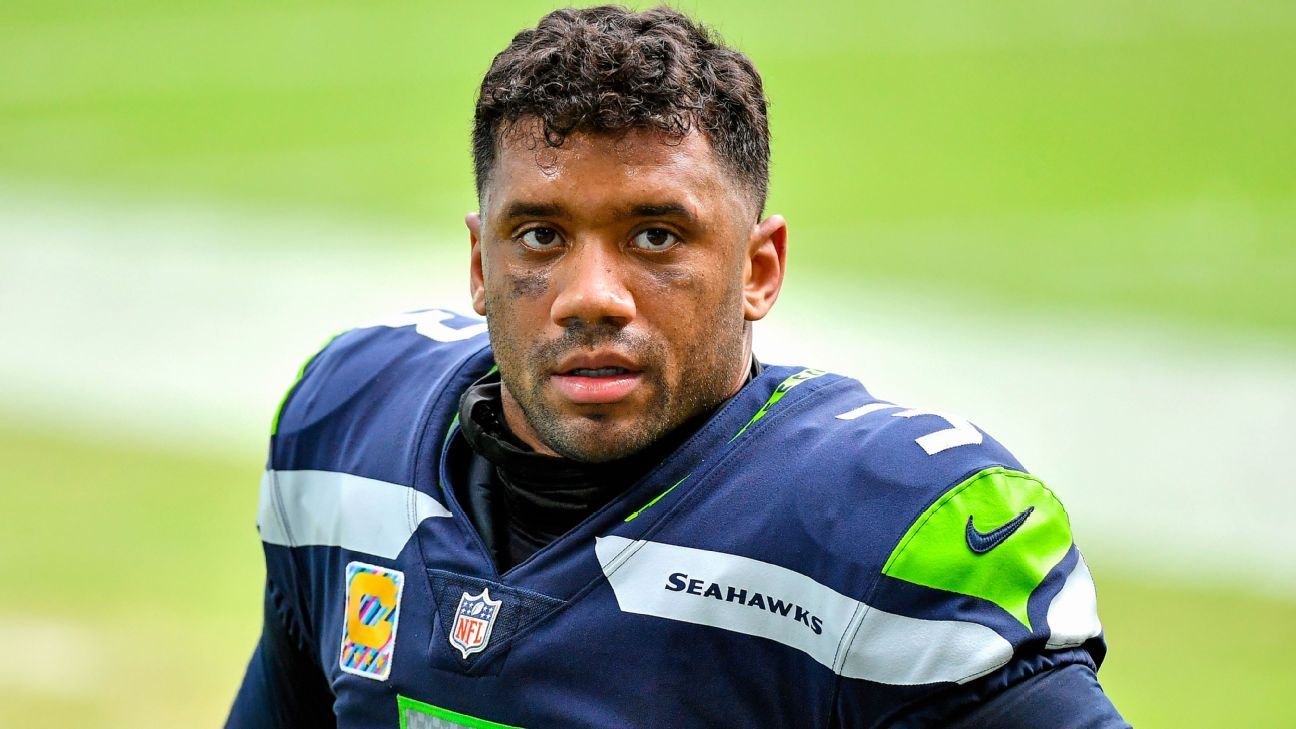 RENTON, Wash. — As frustrated as Russell Wilson was after last season, the Seattle Seahawks quarterback never wanted to play anywhere else.

He made that point clear Thursday as he spoke with reporters for the first time since February, when his public criticisms of the organization led to speculation about a possible trade.

“Obviously I love Seattle, I love playing here,” Wilson said. “I’ve had a great career here so far. I’ve always wanted to play here for my full career obviously. I think there was some unfortunate frustrations after the season. Obviously you want to win it all and do it all and do everything you can. I think everybody on our team does. You want to win it, and I think unfortunately I think it got a little blown out of proportion a little bit.”

Two days after the Super Bowl, Wilson voiced his frustrations about his pass protection and perceived lack of say in personnel moves relative to other top quarterbacks. He said Thursday that he didn’t intend his comments as criticism of his offensive line and that he didn’t need to have any conversations with those players in order to clear the air.

The drama reached its peak when Wilson’s agent, Mark Rodgers, told ESPN’s Adam Schefter that the quarterback would accept a trade to only four teams. Wilson, who has a no-trade clause, said Thursday that was made public because he wanted to set the record straight that he did not request a trade and — with the rumor mill buzzing — to clarify where he would play if Seattle was interested in dealing him.

Wilson said his relationship with coach Pete Carroll is as strong as ever and that the two are on the same page.

“I did not request a trade,” Wilson said. “I’ve always wanted to play here, and the reality is, I think calls were getting thrown around, this and that, and I think that’s just a reality. But I think at the end of the day, the real reality is that I’m here and I’m here to win and I’m here to win it all.” 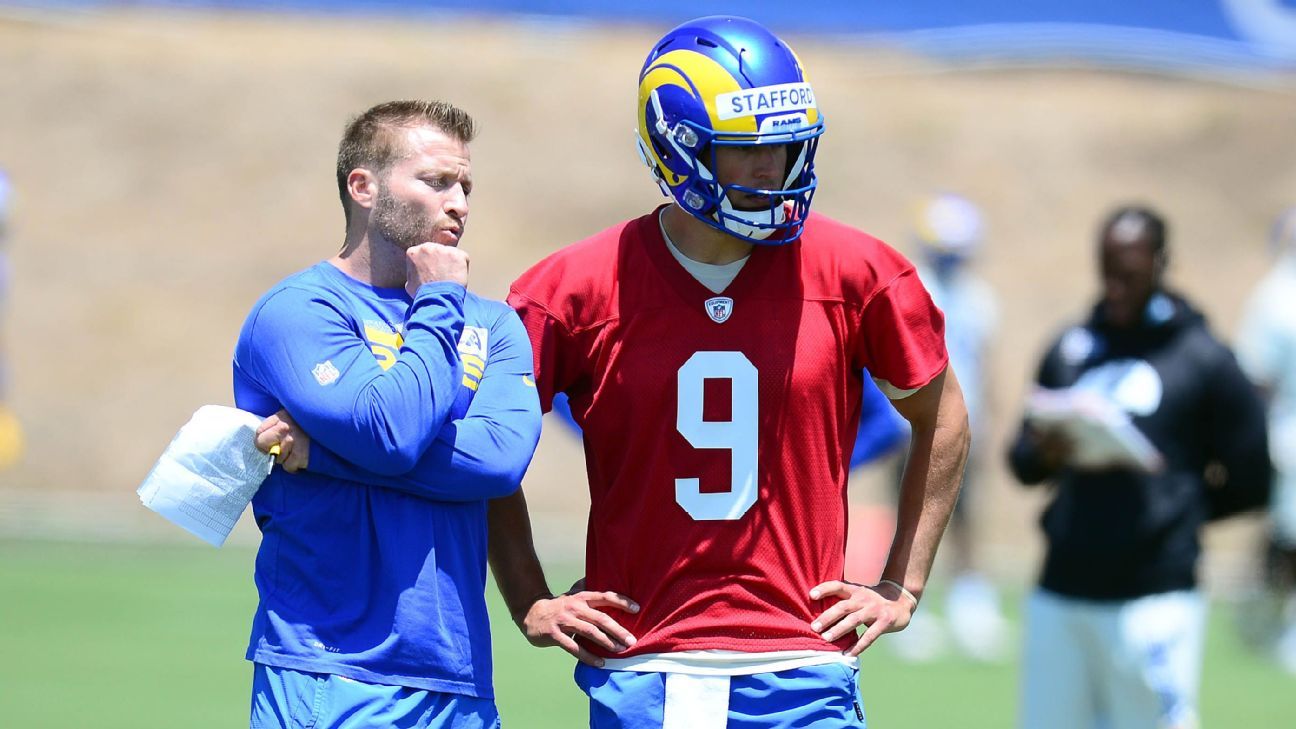 INGLEWOOD, Calif. — Los Angeles Rams coach Sean McVay has been rather chipper recently. On Thursday, McVay admitted that new quarterback Matthew Stafford has brought it out of him.

During a news conference at SoFi Stadium conducted by the Super Bowl host committee, McVay was asked for his thoughts on Stafford.

“I think I’ve been very happy,” McVay said, smiling. “Everybody says, ‘Man, you just seem like you’re in a better mood this offseason,’ and I said, ‘Damn right I am.'”

Two weeks after losing to the Green Bay Packers in a divisional playoff, the Rams traded quarterback Jared Goff, two first-round picks and a third-round pick to the Detroit Lions in exchange for Stafford.

Goff, the No. 1 overall pick in 2016, had spent five seasons with the Rams, including four with McVay. However, after winning back-to-back division titles and an NFC championship together, their relationship began to falter after a difficult loss to the New England Patriots in Super Bowl LIII. Ultimately, Stafford’s request for a trade after 12 seasons with the Lions marked the end for Goff in L.A.

With Stafford’s arrival, the Rams are hopeful to return to the Super Bowl, which will be played next February at SoFi Stadium.

“This guy, he’s a special guy,” McVay, 35, said about Stafford. “I think one of the best ways that I can describe him when you hear people that have been around him, there’s a known confidence where when he walks into a room, you feel his presence, but he’s got a great humility about himself. Everybody loves being around him, and he’s one of those guys that’s a true igniter. He makes everybody around him better.”

Stafford, 33, said working with McVay has been “great.”

The Rams will conclude their offseason program Thursday with a mandatory minicamp practice at SoFi Stadium in front of an anticipated crowd of about 30,000. 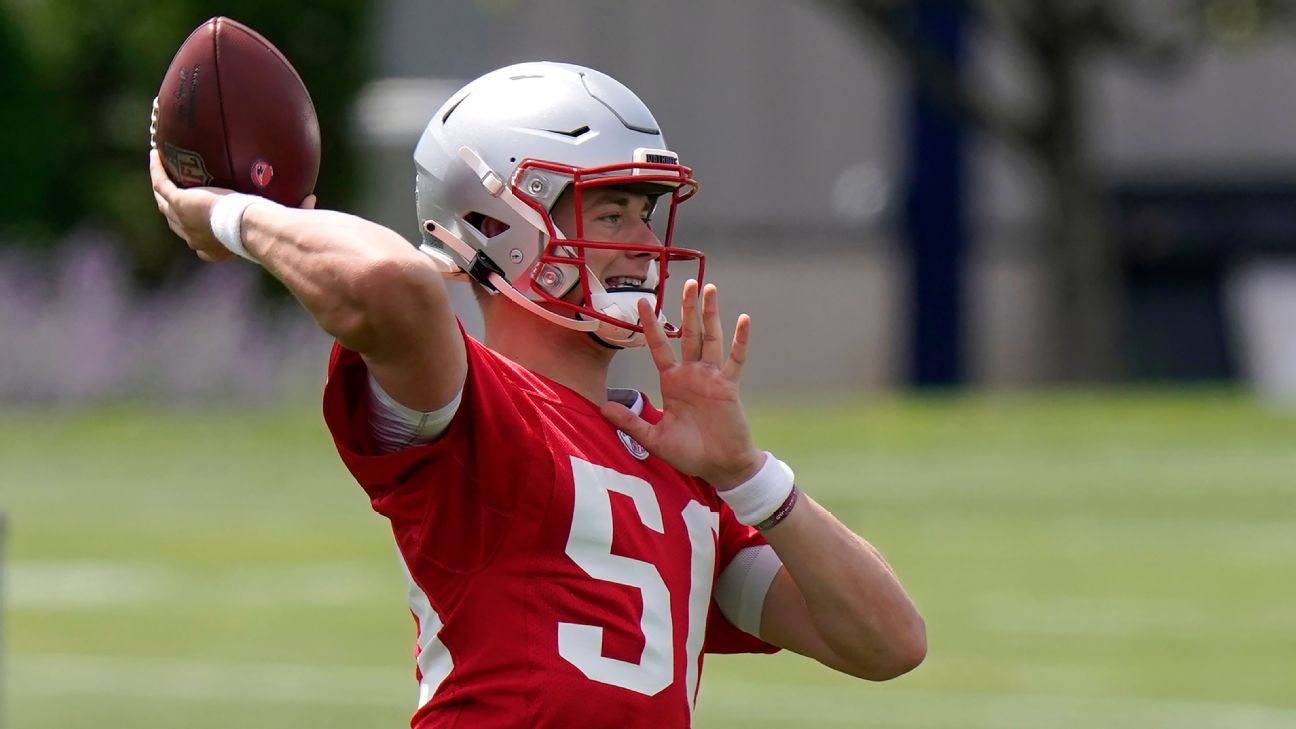 “I’m the rookie so I’m just learning from them. We’re all in this together. There’s competition but people want to have a misconstrued word there like it is a bad competition or unhealthy,” Jones said. “We’re all close. We’re all going to get better together. That’s what we’re going to do.”

How fast Jones improves and puts himself in position to be the starter is naturally a hot topic in New England after the Patriots selected him 15th overall, the first time coach Bill Belichick has picked a quarterback in the first round.

Belichick often makes the point that the spring is a time for teaching, and the real competition begins at the start of training camp in late July. He previously declared Newton the team’s top quarterback, saying time will tell if anyone will challenge him. Meanwhile, Jones called Newton “a good mentor” to him.

“He calls me ‘Mac and Cheese,’ so I’ve got my nickname,” he said, adding that Stidham and Hoyer have also helped him in the film room as he works to measure up to them in mastering the playbook.

“They can do it really fast. My goal is to hopefully be able to do it even faster every day and I’ve tried to do that. It’s kind of like second nature for them. I have to figure out how to do it fast and execute the plays really fast to a level in a new offense.”

Assessing his own progress, Jones, 22, acknowledged that he’s had some good days, and then some bad ones.

“It’s not going to be perfect every day. It’s hard when you’re competitive and you want it to be really good every day. It’s not going to be like that at first. Eventually you get it and things start rolling your way,” he said. “I think it just goes back to following my rules and there’s a lot going on in my brain. You’re just trying to seeing everything. Sometimes you see too much or whatever. And then you see nothing. So I have to figure out, in this offense, how I can do that — how I can break down the plays, what’s my job, what do I have to do on this specific play, and then slot the plays individually.

“I did that obviously good in college, or whatever, but this is the pros and I have to figure out how to do it here.”

Jones, who led Alabama to the national championship last season while competing a record 77.4% of his passes, described how he has been approaching each day.

“I kind of have two buckets. Things I know in one bucket, and things I keep messing up — or things I’m not getting — I have to put them in another bucket and figure out what’s wrong,” he said. “You have to improve on the bad and keep the good in the good.”

The Patriots are scheduled for a final voluntary organized team activity on Friday, and then have their three-day mandatory minicamp starting Monday.

As for what Belichick has seen from Jones’ learning of the playbook, he said: “Mac’s working at it just like everybody else and there’s a lot for all these guys to learn and absorb and it just keeps piling up each day. But as a group, they’ve worked hard and we’re making progress … things are moving in the right direction.”

Even with a 2-0 lead, the Utah Jazz know they still have plenty to prove