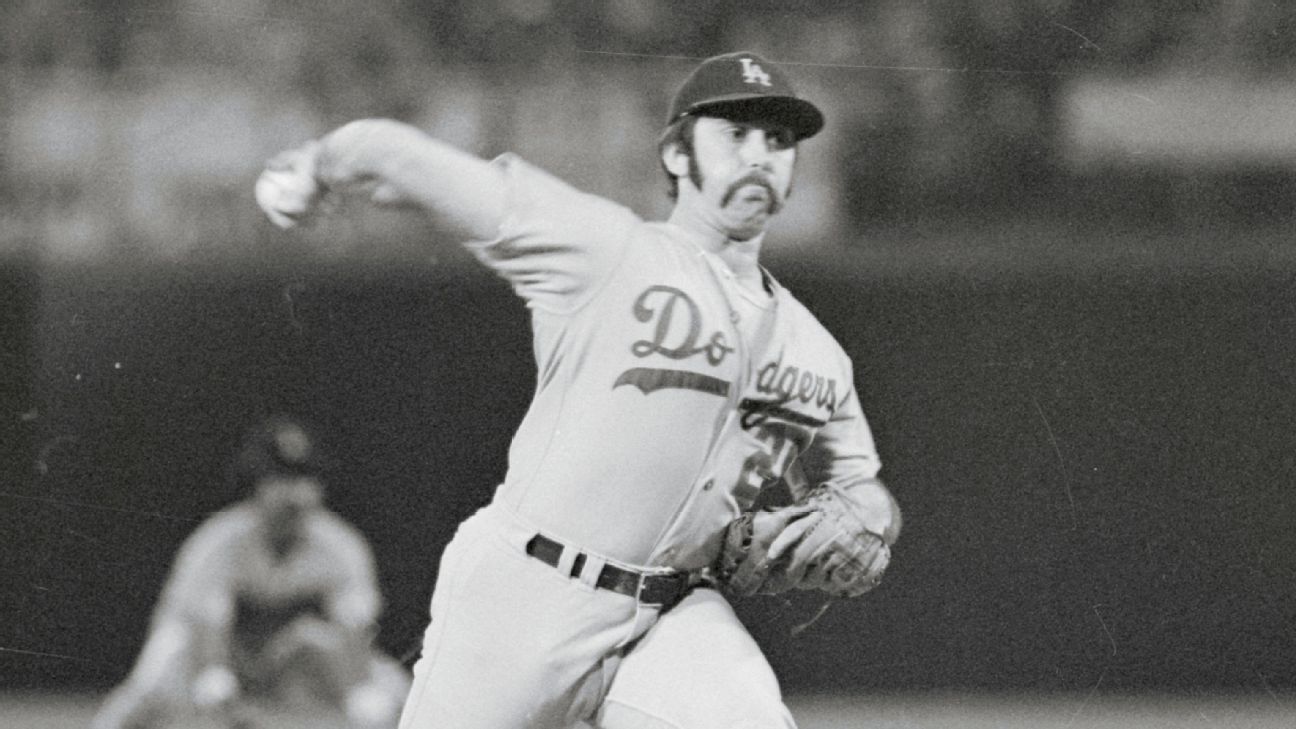 LOS ANGELES — Mike Marshall, who became the first reliever to win the Cy Young Award when he set a major league record by pitching 106 games in a season for the Los Angeles Dodgers, has died. He was 78.

Marshall died Monday night at home in Zephyrhills, Florida, where he had been receiving hospice care, according to the Dodgers, who spoke Tuesday to his daughter Rebekah. She did not give a cause of death.

The team planned a moment of silence for Marshall before a game against the St. Louis Cardinals.

He was an All-Star with the Dodgers in 1974 and 1975. He jogged to the mound from the bullpen, common for relievers today, rather than being driven in a cart as was customary then.

In the 1974 postseason, Marshall pitched in two NL Championship Series games and all five World Series games, in which the Dodgers lost 4-1 to the Oakland Athletics. He saved the Dodgers’ lone win, preserving a 3-2 victory in Game 2 by picking off speedy pinch runner Herb Washington at first base in the ninth inning.

Marshall still holds the American League record for games pitched in a season with 90 for the Minnesota Twins in 1979. He led his league in games pitched four times, saves three times and games finished five times.

He was known for throwing the screwball, an elusive pitch that breaks in the opposite direction of a slider or curveball. Depending on the pitcher’s arm angle, the ball also could have a sinking action. Fernando Valenzuela later won the Cy Young throwing the same difficult pitch for the Dodgers.

Screwballs like Marshall’s have fallen out of favor with big league pitchers in recent generations. In fact, the only player to throw one in the majors this season is related to Marshall. Tampa Bay Rays right-hander Brent Honeywell Jr. learned the backward-breaking curveball from his father, who was Marshall’s cousin. Marshall taught the pitch to the elder Honeywell when the latter was a young player.

Born Michael Grant Marshall on Jan. 15, 1943, in Adrian, Michigan, he began his big league career with the Detroit Tigers in 1967. They sent him back to the minors in 1968, when he was drafted by the expansion Seattle Pilots. He pitched a single season for the Houston Astros in 1970.

He was traded after the 1973 season to the Dodgers for outfielder Willie Davis and pitched for Los Angeles for three years. Marshall is not related to outfielder Mike Marshall, who won World Series titles with the Dodgers in 1981 and 1988.

Marshall moved to the Atlanta Braves from 1976 to 1977, before switching to the American League with the Texas Rangers in 1977. He pitched for Minnesota from 1978 to 1980 and finished his career with the New York Mets in 1981.

At 17, Marshall was signed by the Philadelphia Phillies as an amateur free agent in 1960. He didn’t pitch professionally until 1965 in the minors. He was purchased by Tigers the following year.

Marshall eventually earned a doctorate in kinesiology at Michigan State while with the Twins. In the months leading up to his record-setting 1974 season, he nearly retired to focus on school. Instead, he decided to pitch for the Dodgers.

He later advocated a pitching method he developed that he believed could eradicate arm injuries. Marshall thought many pitchers’ arm rotations led to ulnar collateral ligament injuries that required Tommy John surgery, named after Marshall’s former Dodgers teammate. It was Marshall who encouraged John, a 31-year-old left-hander at the time, to undergo the still experimental procedure that repaired his elbow and preserved his career.

Marshall is survived by his wife, Erica. He was preceded in death by his first wife, Nancy, who died April 30 in Minnesota at age 78. The couple had daughters Deborah, Rebekah and Kerry. 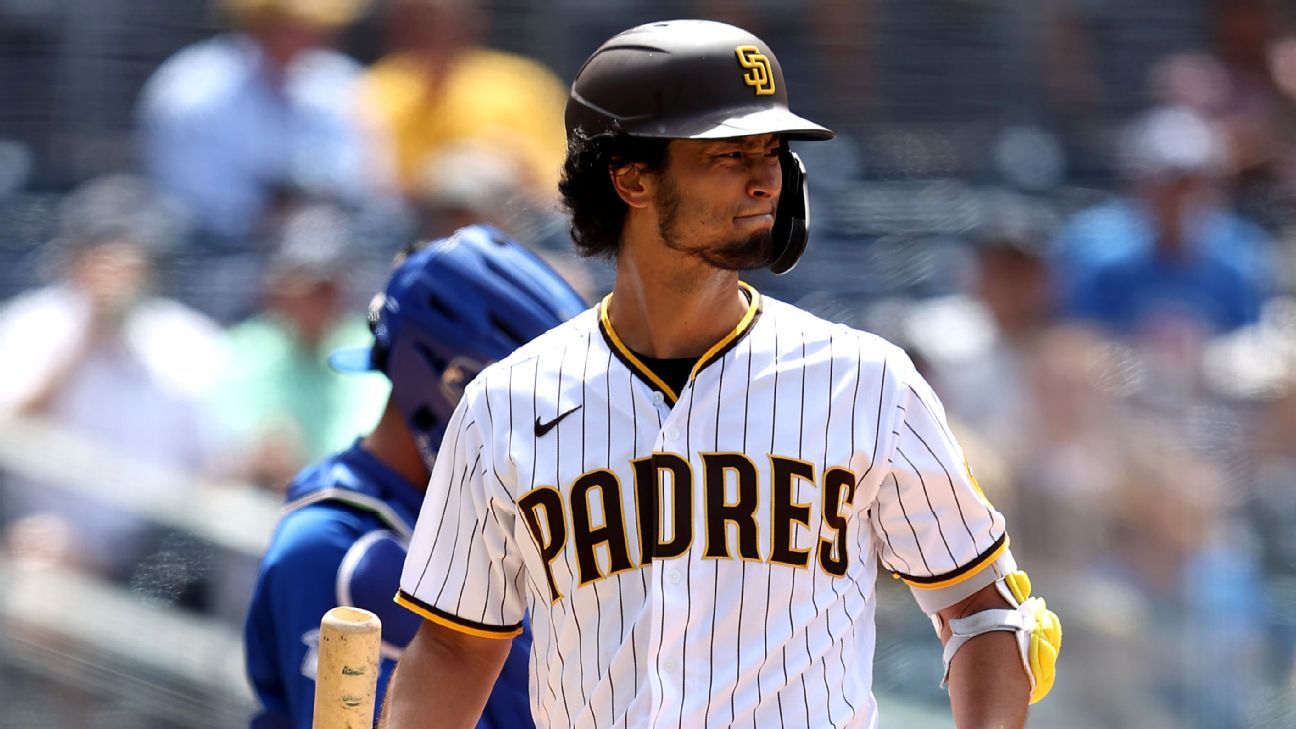 Yu Darvish‘s name was announced at Petco Park to begin the bottom of the third inning on Wednesday afternoon, and “Intoxicated,” a popular house song by Martin Solveig and GTA, blared over the speakers.

Chicago Cubs first baseman Anthony Rizzo, who famously uses that song as his walk-up music, threw his arms up in the air in mock disgust. Darvish, the former Cubs starter in his first season with the San Diego Padres, cracked a big smile as he approached the batter’s box.

Darvish, making his first start against the Cubs since an offseason trade, wasn’t trolling Rizzo.

He was paying homage.

“I used that song because it was Rizzo who kind of took care of me when things weren’t really working my way in Chicago,” Darvish said through his interpreter after the Padres’ 3-1 loss. “It was, in a way, to say ‘thank you’ to him. And obviously I have a good relationship with him.”

Darvish continued his remarkable season in the rematch against his former team, allowing only two runs over seven innings to put his ERA at 2.28 through his first 13 starts with his new team. But the Padres, collectively struggling offensively in recent weeks, lost for the 10th time in their last 17 games.

Darvish, 34, finished second in National League Cy Young Award voting last year and has been among the game’s best pitchers since the start of the 2020 season, going 14-5 with a 2.15 ERA, 185 strikeouts and only 33 walks in 155 innings.

Darvish’s time with the Cubs got off to a rough start. He joined them on a six-year, $126 million contract in February of 2018 and was limited to only eight starts that season. But he turned it around in 2019, posting a 3.98 ERA in 178 2/3 innings, then reached another level in the pandemic-shortened season.

“Looking back, I had some ups and downs in Chicago,” Darvish said. “Good times and bad times, looking in retrospect. But what I find is that the fans, the organization, and even the media members there — I had tremendous amount of support to get through my years there. So there’s a sense of, I guess, gratefulness there.” 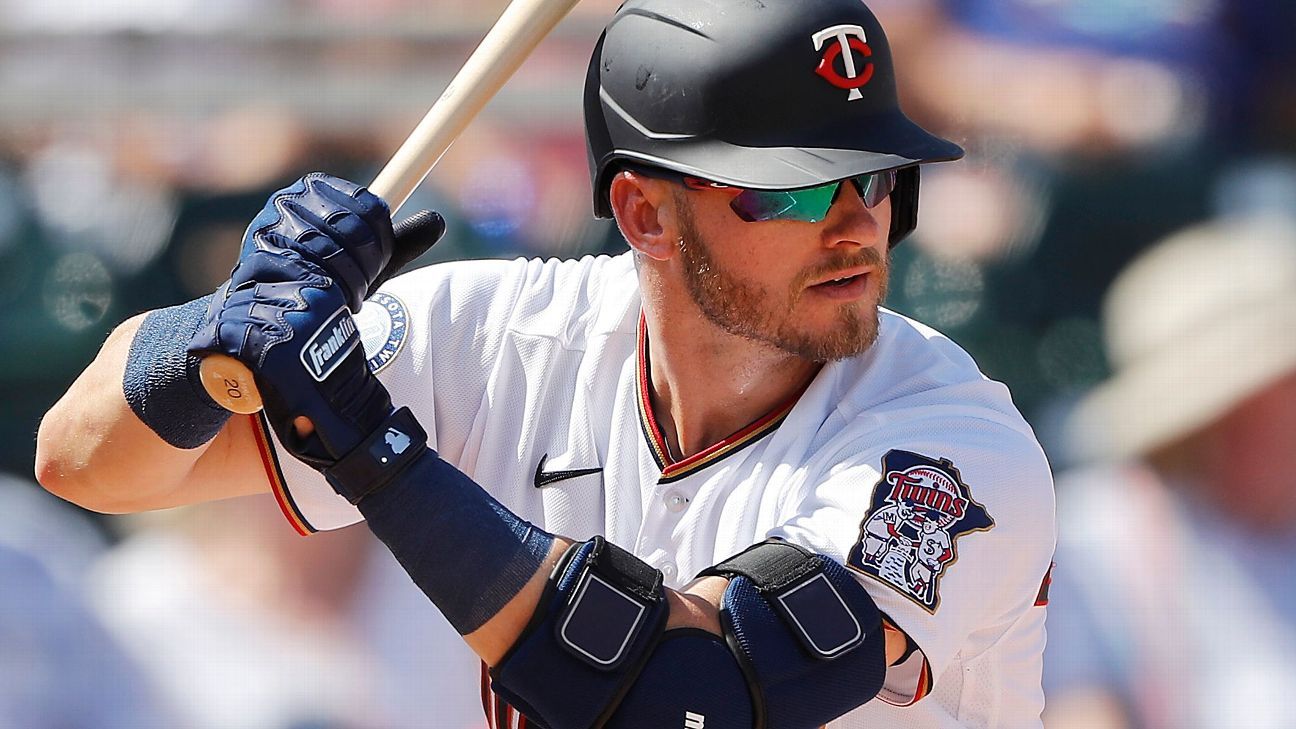 Josh Donaldson spoke with reporters for about 30 minutes on the field before Wednesday’s game between the Twins and Yankees at Target Field, and the Minnesota third baseman said he wasn’t calling out New York ace Gerrit Cole last week when he referenced Cole’s diminished spin rate in his previous start.

“When I say something, it’s been thought through before. It’s not just something on a whim,” Donaldson said. “I would say this: With Gerrit Cole, he was the first guy to pitch since the [minor league] suspensions had happened and he was the first guy you could see spin rates going down. Since Gerrit did that — we’re going off an interview that was done four or five days ago — there have been 12 or more guys already whose spin rates have magically dropped in the last week. So it’s not just Gerrit Cole; I want to get that out. With that being said, we’ll see how it plays out.”

“Is it a coincidence Gerrit Cole’s spin rate went down yesterday after four minor leaguers get suspended for 10 games?” Donaldson had said last week. “Is that possible? I don’t know. Maybe.”

With MLB indicating it soon will start cracking down on illegal substances applied to the baseball, other pitchers also have seen their rpms fall. Los Angeles Dodgers starter Trevor Bauer, who had seen his average spin rate increase dramatically the past two seasons, also had his lowest average spin rate of 2021 in his last start, averaging 2,780 rpms after averaging 2,888 rpms heading into that game.

Asked Tuesday about Donaldson’s comments, Cole said, “I kind of felt it was a bit of low-hanging fruit, but he’s entitled to voice his opinion. I just have other things that I need to keep my focus on, so respectfully I can’t worry about that type of stuff. I would say as a member of the executive council and the union, part of my role there is to facilitate communication about all things involving the game and I’m open to doing that.”

Donaldson responded Wednesday to Cole’s non-answer about whether he had ever used a substance called Spider Tack by saying, “I saw the response. That’s him and his camp. I can’t control his response, right? I think at the end of the day, time is going to tell what happens. And I’m not in his position so I don’t have to wear that when I sleep at night.”

With some speculation that Cole might throw at Donaldson on Wednesday, he instead went right after him in the bottom of the first inning, striking out Donaldson on a 1-2 big-breaking curveball that measured 2,901 rpms — a higher spin rate than all but one curveball he threw against the Rays. Cole stared in at home plate as Donaldson walked away to the dugout. In the third inning, Cole fanned Donaldson for a second time, on a 2-2 slider that was up and in, and once again gave him a little extra look.

Donaldson, the 2015 American League MVP with the Toronto Blue Jays, has always been an outspoken player and said he decided to speak out on the foreign substance issue because “Nobody’s speaking up for the hitters. So it’s probably not going to be as serious as if it’s a rookie or somebody else that doesn’t have the time in the big leagues. So I felt like, for myself, it was almost a responsibility for me to say something because that’s how serious I think [the problem of grip substances] is.”

Donaldson reinforced that stance on Wednesday.

“Just think about how many pitches I’ve seen in my career, think about Nelson Cruz, a lot of these guys who have seen a lot of pitches,” he said. “We know when stuff’s up. It’s hard to probably find the ingredient to what’s causing that. But now that there’s been some enlightenment to that, that’s why you’re seeing guys take a stance on it.”

Tampa Bay Rays pitching prospect Tyler Zombro was discharged from Duke University Hospital on Wednesday afternoon, six days after he was struck in the head by a line drive during a game in Durham, North Carolina.

The Rays said Zombro and his family will remain in Durham and continue outpatient and occupational therapy.

“The Rays extend their gratitude to the doctors, nurses and staff caring for Tyler, and continue to be overwhelmed by the support for his recovery,” the Rays said.

Zombro, a 26-year-old reliever for the Rays’ Triple-A affiliate, the Durham Bulls, had been in stable condition since June 3, when the incident occurred in the eighth inning of a game against the Norfolk Tides.

Zombro was struck in the face by a line drive off the bat of Brett Cumberland and immediately fell to the ground. His feet appeared to be shaking as an athletic trainer rushed to him. Zombro was taken off the field on a stretcher as teammates looked on.

Zombro has been in the Rays’ organization since 2017, when he signed as an undrafted free agent out of George Mason. He has a 3.18 ERA this season and a 2.79 career ERA in the minors.

Man Utd could turn to Chelsea, Barcelona or Juventus if Dortmund transfer talks break down