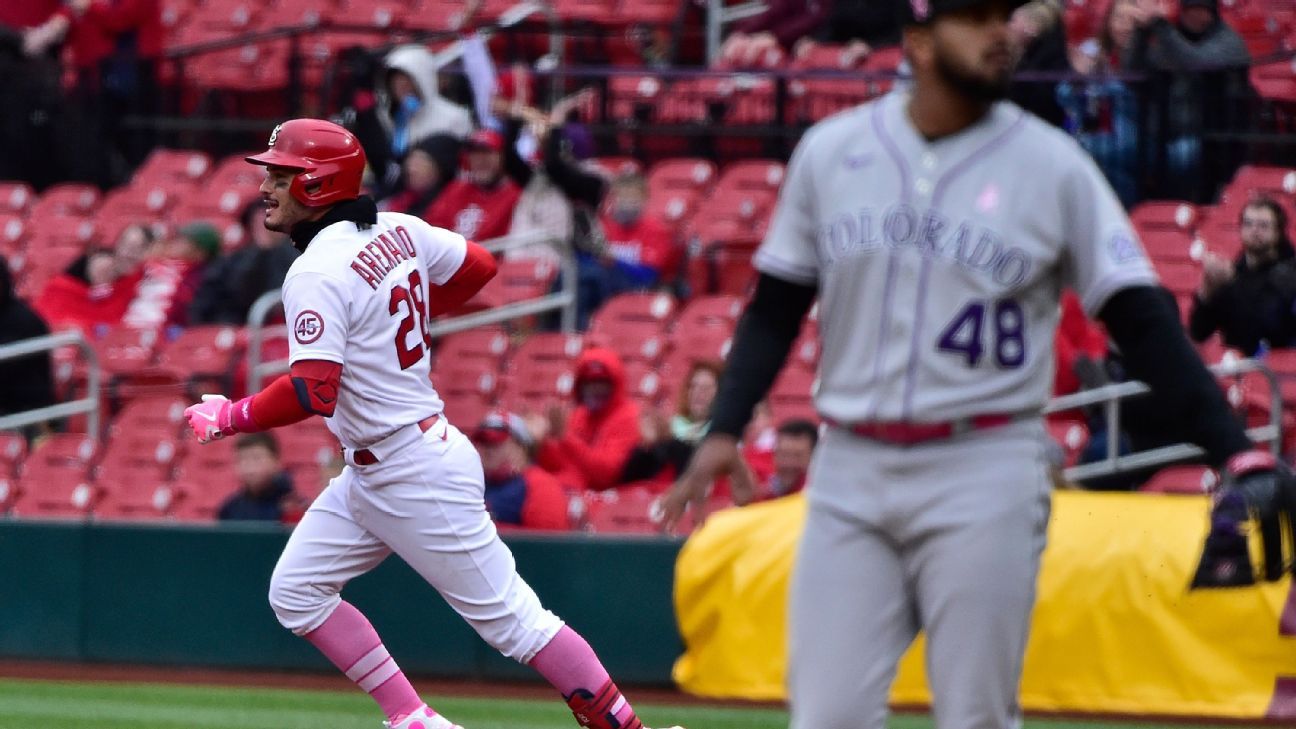 Yadier Molina hit an RBI double and Ryan Helsley got Josh Fuentes to ground into a game-ending double play with the bases loaded. St. Louis completed a three-game sweep and has won nine of 11 overall.

Arenado was acquired from the Rockies in a blockbuster trade in early February after the star third baseman spent the first eight years of his career with Colorado.

He said it felt strange playing against his old teammates during the weekend series.

“It was definitely weird,” Arenado said. “Obviously, I know a lot of those guys. At the end of the day, it was a great series to win.”

Arenado has reached safely in 18 of the past 20 games. His mom, Millie, was in attendance on Mother’s Day, which made the home run even more enjoyable.

He planned on taking Millie to dinner at a place of her choice later in the evening.

“It’s just great to have moments like that with your family,” St. Louis manager Mike Shildt said. “That’s what life is all about. These are magic moments that people will cherish for a long time.”

Wainwright (2-3) struck out five and walked three over 8⅓ innings, improving to 11-1 against the Rockies. He retired nine batters in a row at one point and eight straight during another stretch.

The 39-year-old right-hander fell two outs short of his 11th career shutout. His last one came in 2016. The veteran simply keeps plugging along.

“I can’t even tell you how much younger I feel than when I was 36, 37. It’s just not even close,” Wainwright said. “I have a great time outperforming expectations.”

Molina and Wainwright have made 279 starts together as a battery, which ranks them sixth all-time.

“This guy amazes me every time he takes the mound,” Molina said.

Helsley earned his second major league save and first this season.

Arenado homered leading off the second against German Marquez (1-4), who allowed two runs, one earned, in six innings. Marquez struck out six and walked three.

Molina added a run-scoring double in the fourth.

St. Louis improved to 14-4 since April 23, the best record in the majors during that span.

“There were a couple situational at-bats where we didn’t get it done early in the game,” Colorado manager Bud Black said. “And then again we didn’t get the big hit there in the ninth. We just couldn’t cash in.”

After five straight series losses, the Los Angeles Dodgers are looking for answers

The civil hearing for the temporary restraining order obtained against Los Angeles Dodgers pitcher Trevor Bauer has been moved to Aug. 16 to 19.

The hearing, expected to last between two and three days, was originally scheduled for Aug. 3, 4 and 19, but Bauer’s side once again asked for a continuance, sources told ESPN.

Bauer’s administrative leave has been extended three times and currently runs through Aug. 6, but Major League Baseball can continue to extend it with consent from the MLB Players Association. Doing so is mutually beneficial because it allows more time for investigations to conclude while players continue to be paid.

The initial hearing — attending by Bauer and his accuser — took place Friday at L.A. County Superior Court and was delayed an additional six business days after Bauer’s attorneys requested more time to prepare a defense against witnesses and exhibits they claimed to not have received until the night before the hearing.

Further delaying the hearing would allow Bauer’s team more time to prepare to cross-examine witnesses — the woman’s team previously stated it would call as many as six — and perhaps give the ongoing criminal investigation a chance to conclude before then.

One of Bauer’s lawyers, Shawn Holley, who famously defended Lindsay Lohan, told the judge during Friday’s hearing that she has advised her client not to testify given the concurrent criminal investigation. But the petitioner’s side stated that Bauer must nonetheless take the stand, even if he invokes his Fifth Amendment right not to answer questions.

MLB and the City of Pasadena Police Department are conducting separate investigations into Bauer, who has been accused by a woman of choking her until she lost consciousness on multiple occasions, punching her in several areas of her body and leaving her with injuries that required hospitalization over the course of two sexual encounters earlier this year, according to a domestic violence restraining order that was filed in L.A. County Superior Court on June 28, copies of which were obtained by ESPN.

The temporary restraining order was executed ex parte, which can be attained without input from the other party. Bauer’s side has strongly denied the allegations of sexual assault, calling the interactions between him and the woman “wholly consensual” and saying in a prior statement that Bauer “vehemently denies her account of their two meetings.”

Bauer hasn’t been with the Dodgers since initially being placed on leave July 2. The Dodgers have canceled Bauer’s bobblehead night, which was scheduled for Aug. 19, and have removed all of his merchandise from the team and online stores, saying they “did not feel it was appropriate” given the investigations.

MLB can unilaterally place players on seven-day administrative leave under its domestic violence policy but must seek consent from the MLBPA to extend it thereafter.

Bauer, the 2020 National League Cy Young Award winner as a member of the Cincinnati Reds, joined the Dodgers with a record-setting three-year, $102 million contract in February that includes two opt-out clauses. 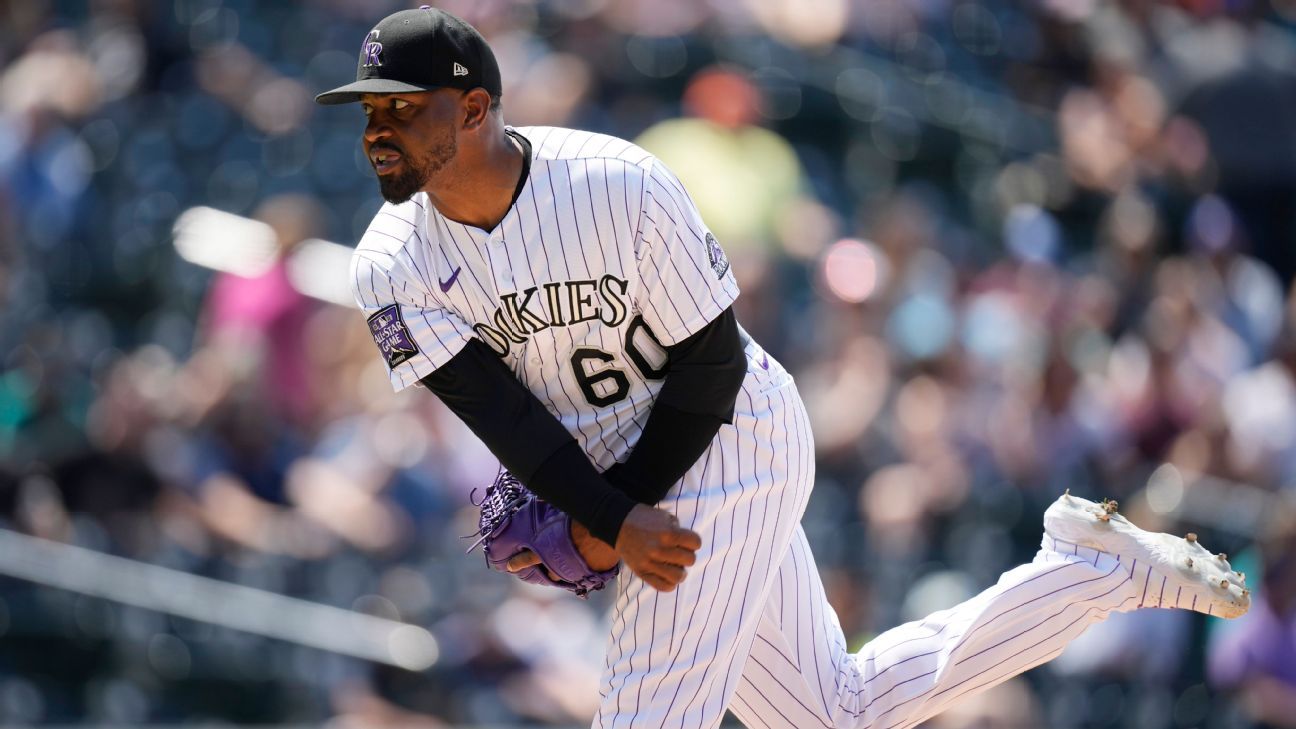 The Cincinnati Reds made a move to improve their bullpen before the trade deadline, acquiring right-handed reliever Mychal Givens from the Colorado Rockies.

The trade is the second made by the Reds to improve their bullpen in consecutive days. On Tuesday, they acquired right-hander Luis Cessa and left-hander Justin Wilson from the New York Yankees for a player to be named later.

The trade marks a return to the Rockies organization for Williams, who was selected in the fourth round by the franchise in the 2020 draft. Colorado had traded Williams to the Reds in a four-player trade last November to acquire reliever Robert Stephenson. 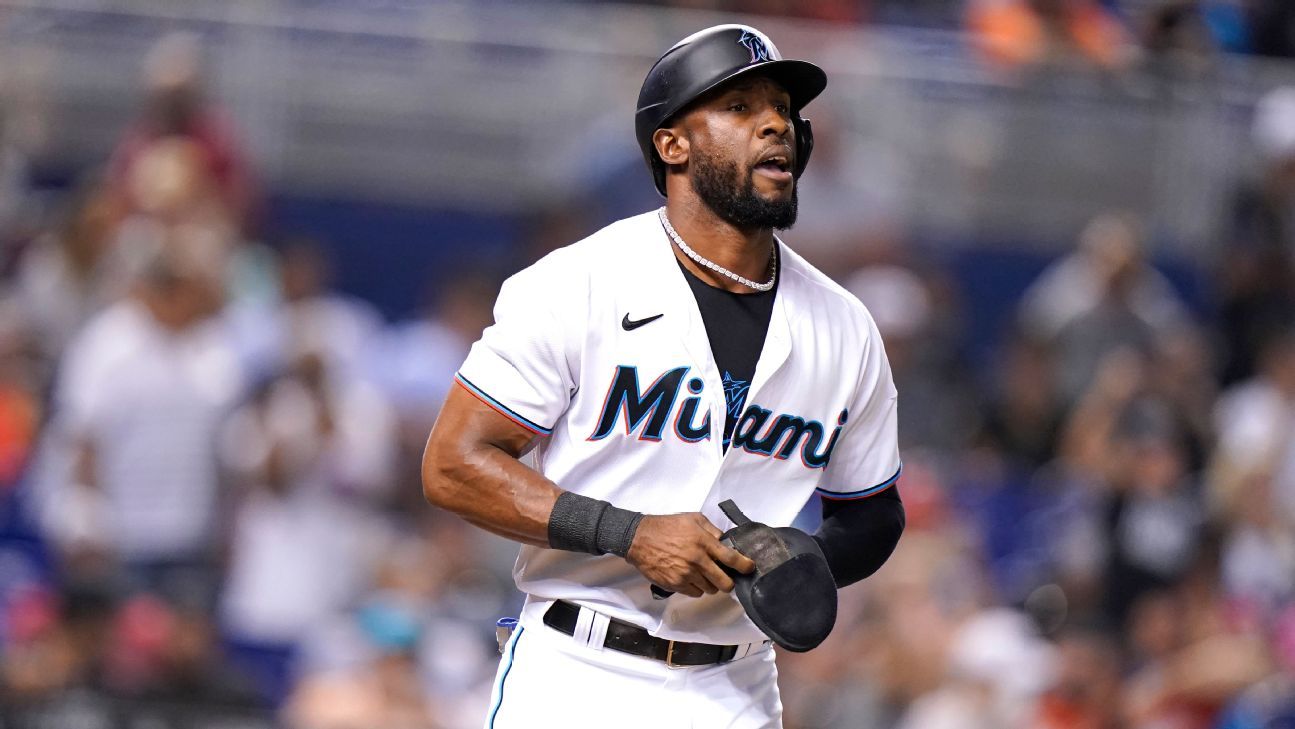 The Marlins will cover the remainder of Marte’s contract, sending more than $4 million to Oakland, sources said.

Marte, 32, is hitting .306 with seven home runs and 25 RBIs for the Marlins this season. He missed time earlier this season with a fractured rib.

Marte, who is a career .288 hitter, is scheduled to become a free agent after this season. Luzardo is under team control through 2025.