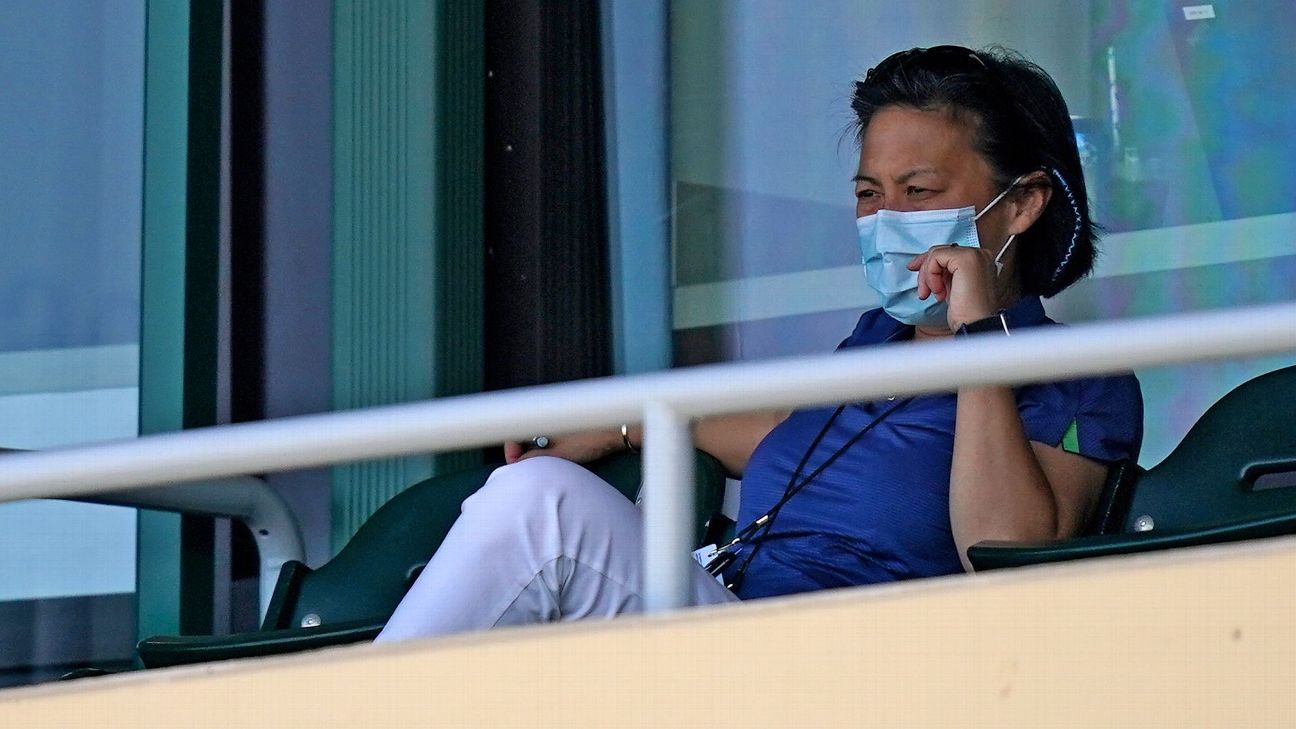 Kim Ng knows it. She spent years beating her head against sports’ glass ceiling, until the Miami Marlins hired her in October as general manager. At her introductory news conference, she said she felt as though a 10,000-pound weight had been lifted — from one shoulder to the other.

“Failure is not an option for me,” Ng says.

“I joke with Kim all the time,” says the Marlins’ CEO, who hired Ng, “saying, ‘Only time will tell whether it was the right decision.'”

Billie Jean King knows it, too. The tennis Hall of Famer, herself a pioneering woman, applauds Ng but said the role comes with pressure.

“The toughest part for us is you know that if you don’t do a great job, you’re going to get killed and it hurts the others coming after you,” King says. “When you’re the first, you don’t want to ever be the last — that’s what every woman thinks. I’m sure Jackie Robinson thought, ‘I don’t want to be the last Black guy.'”

In other words: Go Marlins. They open their season Thursday with a roster that carries a female executive’s imprint, and it might just be their best team in more than a decade.

For Ng, so far so good. She left an executive position with Major League Baseball to join the Marlins, the long-downtrodden franchise on the upswing since Jeter’s ownership group took over in 2017. During the offseason, amid the constraints of the team’s perennially tight budget, she signed veteran slugger Adam Duvall and swung deals to revamp the bullpen.

Now keeping score begins for the Boys of Summer — and for the first female GM in the four major North American professional sports leagues. She’s also a trailblazing Asian American.

Among those who can best appreciate Ng’s challenge is her hero, King, the daughter of a former major league scout, sister of a former big league pitcher and part owner of the Los Angeles Dodgers.

Visiting Dodger Stadium shortly after she bought a share of the team last October, King was quickly reminded what it’s like to be a woman on a ballfield.

“I had forgotten what an old-boy network it is,” she says. “I felt like I was back in the ’50s and was 9 years old again. As a woman, you’re definitely on the outside.”

Ng (pronounced Ang) entered that world as a Chicago White Sox intern in 1990. She won three World Series rings while spending 21 years in the front offices of the White Sox, Yankees and Dodgers, and spent the past nine years with MLB as a senior vice president.

Jeter, baseball’s first Black CEO, reached out to her regarding the Miami job.

“All she needed was an opportunity,” said Jeter, who played with the Yankees when Ng worked for them. “Everyone talked about how historic it was, but I didn’t make this decision to be historic. I made this decision because it was the best decision for the organization.”

After being hired, Ng said she had been turned down for a similar job by at least five other teams over the past 15 years.

“I’ve had to definitely win people’s respect, and that is a constant battle,” Ng says. “The job is hard enough, right? So when you put that on top of it, at time it’s a drag. It’s aggravating. What brings you back to neutral is you either deal with it or you go home, and I’ve never wanted to go home.”

“Failure is not an option for me.”

Ng, 52, played stickball as a grade-schooler in New York City and softball at the University of Chicago. As she set her sights on a baseball career, she had an idea what she was getting into.

She read the 1970 tell-all bestseller “Ball Four,” which exposed the sport’s boys-will-be-boys world that is less so today.

“Less so,” she says dryly, “but there are still some elements.”

Ng navigates that world with what Yankees general manager Brian Cashman describes as “an amazing disposition.”

“She’s very inclusive, she’s very approachable, she listens,” Cashman said. “She creates an atmosphere of comfort and team-building. The reason she has risen through the ranks is the way she connects with everybody.”

Ng is married to Tony Markward, who owns a wine company based in Oregon. She has no children, aside from the 250 players in the Marlins organization. Markward will be part of the crowd on Opening Day but spends a lot of his time out west while she tries to win the NL East.

Ng is frequently reminded of the magnitude of her job, such as when a friend’s 8-year-old daughter came home from school with a pamphlet that acclaimed the Marlins’ new general manager.

Even so, Ng’s path is uncharted, and scrutiny will be intense.

“She asked me — any advice?” Cashman said. “The only advice I gave her was: Win. That’s the biggest part of every one of these job descriptions.”

March is Women’s History Month, but April looms, and Ng knows it’s all about the future. 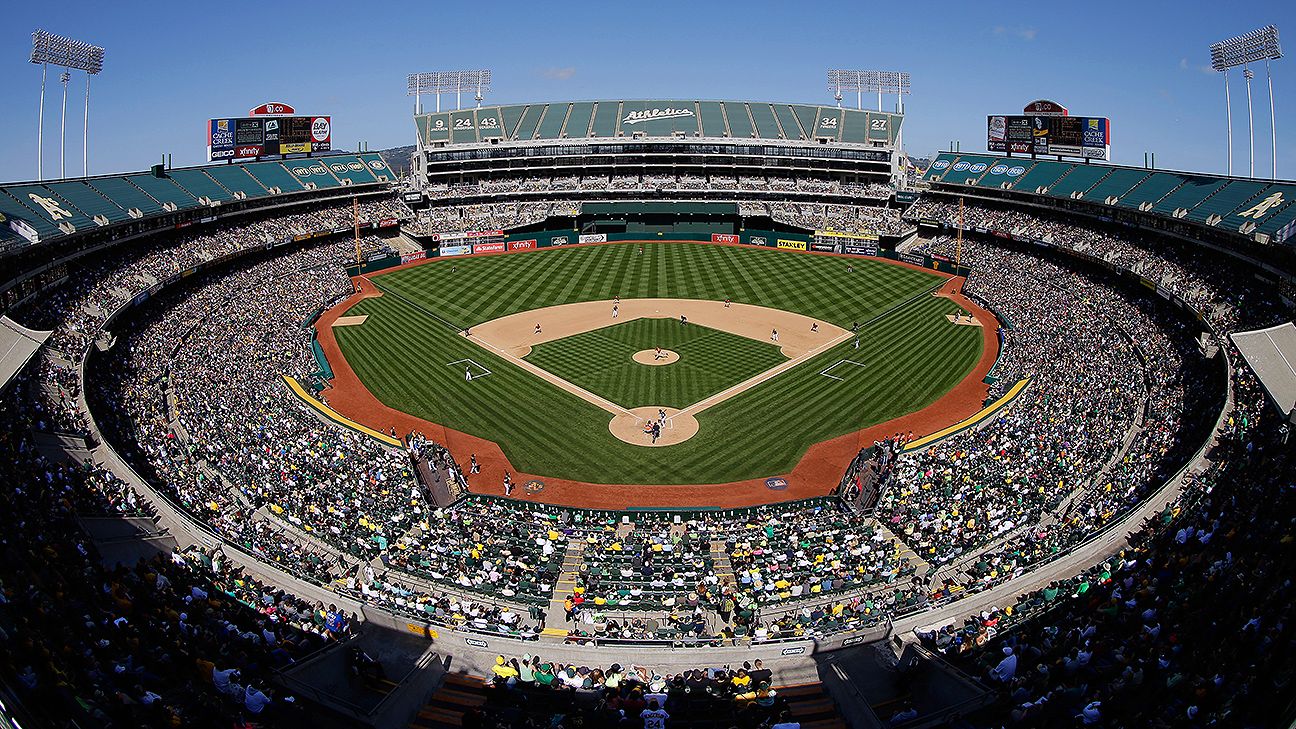 Oakland Athletics president Dave Kaval stood somewhere near the south side of the Las Vegas Strip on Wednesday morning, with the Cosmopolitan and Planet Hollywood within eyesight. Kaval will be there alongside his architect over the next two days, he said, sitting in on a series of meetings and analyzing where a prospective new stadium could someday reside. Meanwhile, negotiations with the city of Oakland regarding a 35,000-seat waterfront ballpark at the Howard Terminal site are in what Kaval described as “the bottom of the ninth inning.”

Oakland City Council officials voted Tuesday in favor of a non-binding term sheet for the ballpark and its surrounding development, a project that will cost up to $12 billion. But Kaval pushed back because the city voted in favor of a term sheet that differed from the one the A’s proposed three months earlier and included amendments that the team was seeing for the first time. Major League Baseball commissioner Rob Manfred followed with a statement expressing disappointment in the outcome and promising to “immediately begin conversations with the A’s to chart a path forward for the Club.”

What, exactly, does that mean?

“I think we need to unpack what was passed and what it means,” Kaval said in a phone interview with ESPN. “The fact that the city did not vote on our proposal — I mean it’s unusual to have that positioning. We do appreciate some of the concessions that were made. I think the party had been negotiating in good faith to try to get to a mutually agreeable solution. Obviously we didn’t get there before the vote. And so we have to balance that progress with some of the stark realities of, ‘How do we move this project into an implementation phase?’ We can’t let the process be the product.”

The A’s made a public proposal in April stating they would privately finance the ballpark, which will cost an estimated $1 billion, while also providing $450 million in community benefits and arranging for an additional $11 billion in private investment to eventually build up the surrounding neighborhood with 3,000 residential units, up to 1.5 million square feet of commercial space, 270,000 square feet for retail, an indoor 3,500-seat performance center, 400 hotel rooms and up to 18 acres available for public parks.

The city countered with a plan that includes three key differences: a new financial structure that depends on only one infrastructure financing district, preventing the A’s from creating an additional one at Jack London Square; an increase in affordable housing demands to 35% of residential units; and an additional community benefits fund that isn’t solely committed to capital investments.

Oakland Mayor Libby Schaaf and other community leaders hosted a news conference near the Howard Terminal site on Wednesday morning in which they touted the city’s proposal and urged the A’s to continue negotiating. Schaaf said she’s noticing an “openness” from the A’s, adding that the city “provided the primary things that they asked for, that they have said they need to keep going on this process.”

“I respect that they’re trying to keep the heat on,” Schaaf said, “and what better place to go than Vegas for heat.”

Kaval, on the other hand, painted the Vegas trips as due diligence to cover for a project that might not materialize and provide a parallel path for a team playing in an outdated facility. Kaval said he wants more specifics about how the A’s would be reimbursed for a $352 million infrastructure payment and more specificity around when environmental clearances will be given and when a final binding vote can occur, ideally by the end of the current baseball season.

Oakland city officials see their counterproposal from Friday, and the amendments that were introduced on Tuesday, as the natural evolution of a negotiation.

A’s officials basically see it as a new agreement entirely.

“We need to know what was passed, how it relates to our original proposal,” Kaval said. “We need to understand the timeline to get the definitive vote. And we need to work really closely with the league, because they have a strong point of view on this. They wanna make sure the A’s have a home. We really are running out of time. We’re under a lot of pressure because our current facility is 10 years past its useful life. Let’s not forget that going sideways is really no longer an option.”

The A’s have spent the better part of the past two decades hoping to secure a new stadium in the Bay Area, a pursuit that took them through San Jose, Fremont and multiple sites in Oakland, most notably around Laney College. Renovations of the current Coliseum site, where the A’s have played since 1968, have been deemed nonviable largely because of the team’s stated desire for a downtown location.

Manfred said before last week’s All-Star Game that it would be a “mistake” to refer to the Las Vegas option as a bluff, calling it “a viable alternative for a major league club.” Other relocation options — including Portland, Oregon; Nashville, Tennessee; Charlotte, North Carolina; Vancouver, British Columbia; and Montreal — could materialize if the team’s deal with the city falls through.

That is not necessarily the case just yet.

“We’re focused on the two parallel paths — Oakland and southern Nevada,” Kaval said. “That’s by the direction of the league, and that will remain our focus until they give us additional direction.” 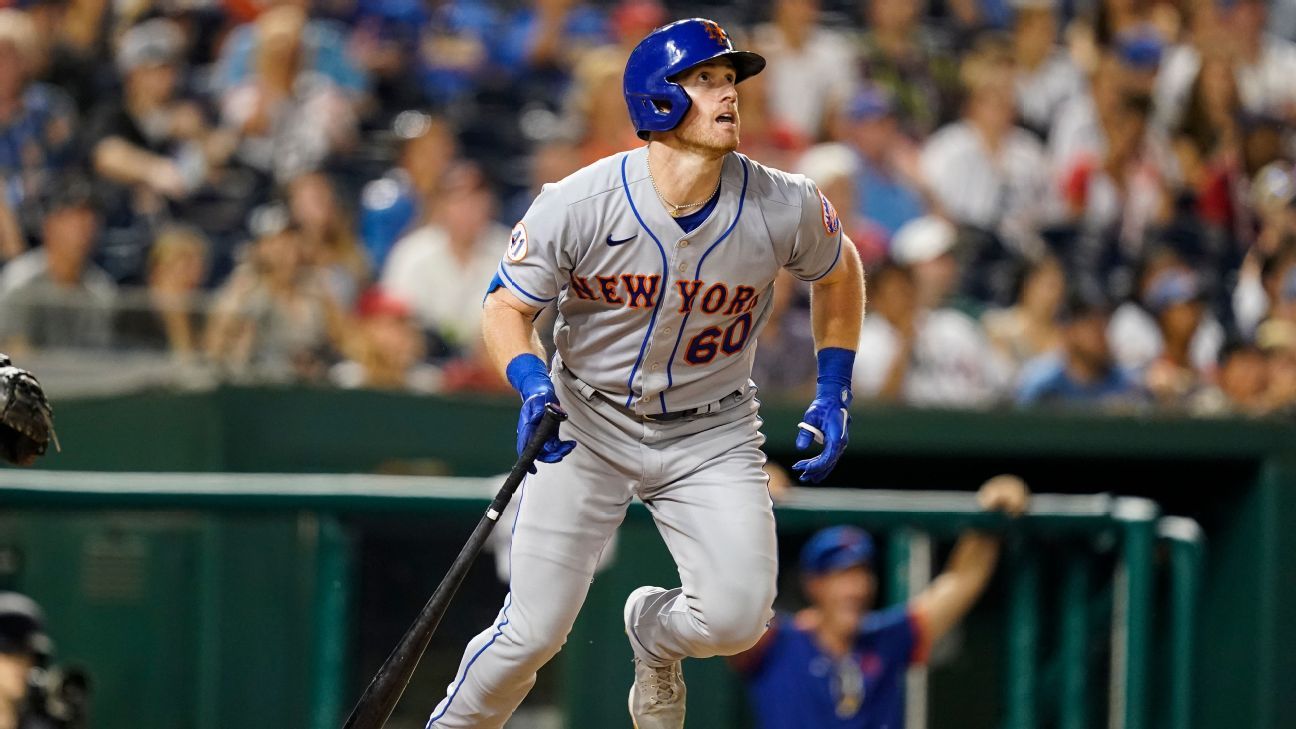 The 26-year-old Ramirez will be optioned to Triple-A Syracuse. He pitched in one game for St. Louis this year and one game last season. 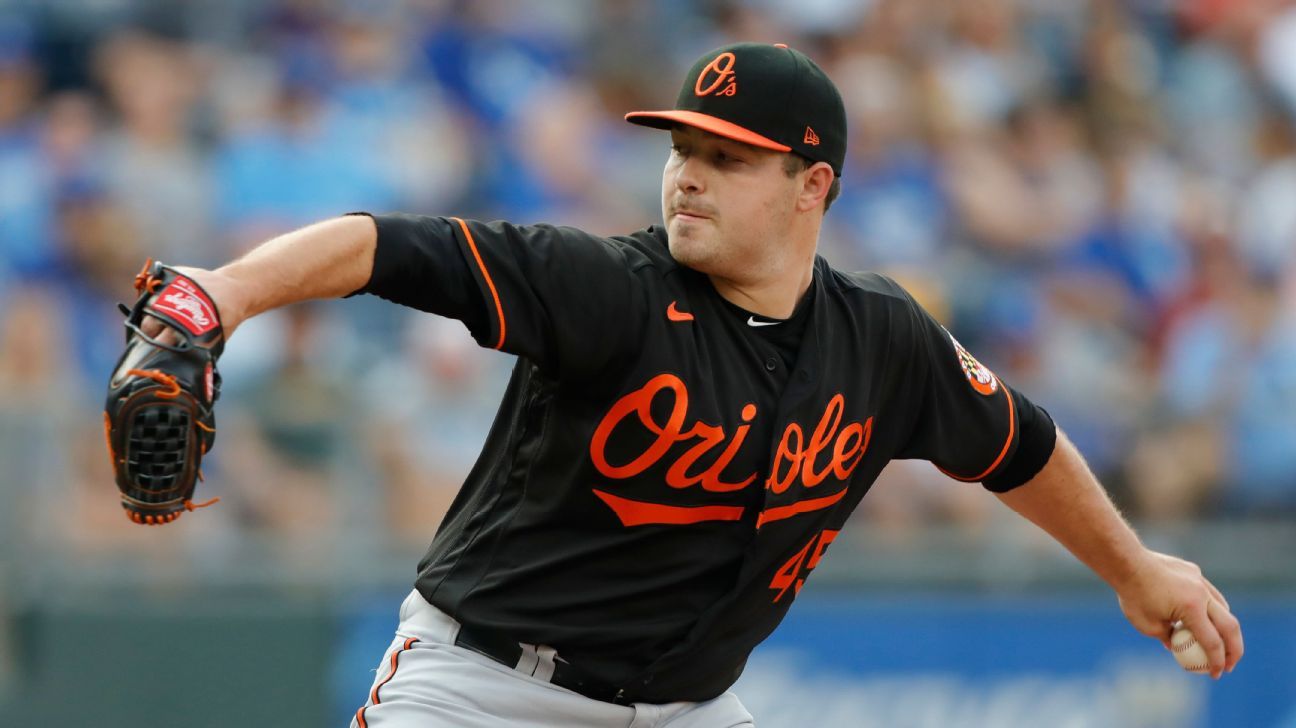 Akin had been scheduled to start against the Rays.

Alexander Wells, who was on the taxi squad, replaced Akin as Wednesday’s starter. Outfielder Ryan McKenna, who had been optioned to Triple-A Norfolk on Tuesday, rejoined the team.

“You’ve seen it a few times here with the league with other clubs,” Hyde said. “It’s really the first time this has happened with us and it’s unfortunate, but I saw that a couple other teams had same sort of issue recently and ready for it to be over.”