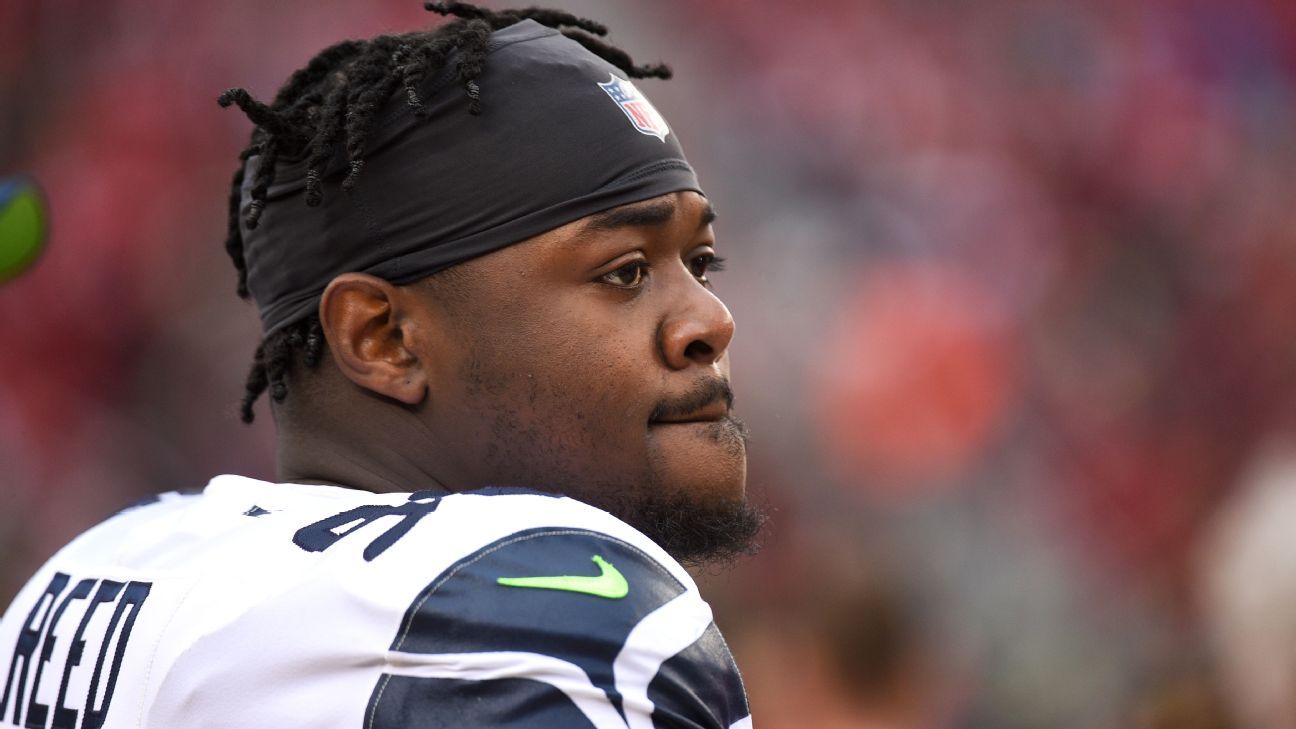 Reed joins a defensive tackle rotation that includes Chris Jones, Derrick Nnadi and Tershawn Wharton. Jones has led the Chiefs in sacks in each of the past three seasons. Nnadi plays mostly on running downs while Wharton showed promise last season as an undrafted rookie.

But Reed, with his 19 sacks over the past three seasons, gives the Chiefs a strong interior pass rusher to combine with Jones.

The Seattle Seahawks released Reed in late March, a year after the team signed him to a two-year, $23 million extension.

Reed, 28, has been a full-time starter since 2017, the year after Seattle chose him in the second round out of Alabama. He was known primarily as a run-stuffer his first two seasons but then broke out for 10.5 sacks in 2018. He began the 2019 season by serving a six-game suspension for violating the NFL’s personal-conduct policy and finished the year with two sacks in 10 games.

He had something of a bounce-back season in 2020 with 6.5 sacks in 16 games but was set to count nearly $14 million against the salary cap before he was released.

For his career, Reed has 22 sacks and 194 tackles in 72 regular-season games.

ESPN’s Adam Teicher and Brady Henderson contributed to this report.

Trevor Lawrence won’t attend NFL draft in Cleveland, will watch at Clemson instead

The NFL and NFL Players Association announced Tuesday that they will issue grants totaling up to $1 million for research into alternative pain management, including cannabis and CBD, through their joint pain management committee.

In the meantime, however, marijuana use will remain restricted by the league’s substance abuse policy. Applications became available Tuesday, and the league and union will award the grants in December.

Dr. Kevin Hill, co-chairman of the committee and director of addiction psychiatry at Beth Israel Deaconess Medical Center, said in a call with reporters that “the level of interest” in using marijuana in pain management “far exceeds the level of evidence” for using it. Current research shows “some” beneficial evidence, Hill said, but the NFL and NFLPA consider those studies to be flawed.

“We want to really find out,” Hill said, “are these treatments safe and do they work? This research is aimed at trying to move toward getting more definitive answers to those questions.”

NFL chief medical officer Dr. Allen Sills also said it is important to understand the science behind whether medical use of marijuana could affect performance.

The NFL has issued similar requests for proposals for research into new helmet designs, among other areas of health and safety. 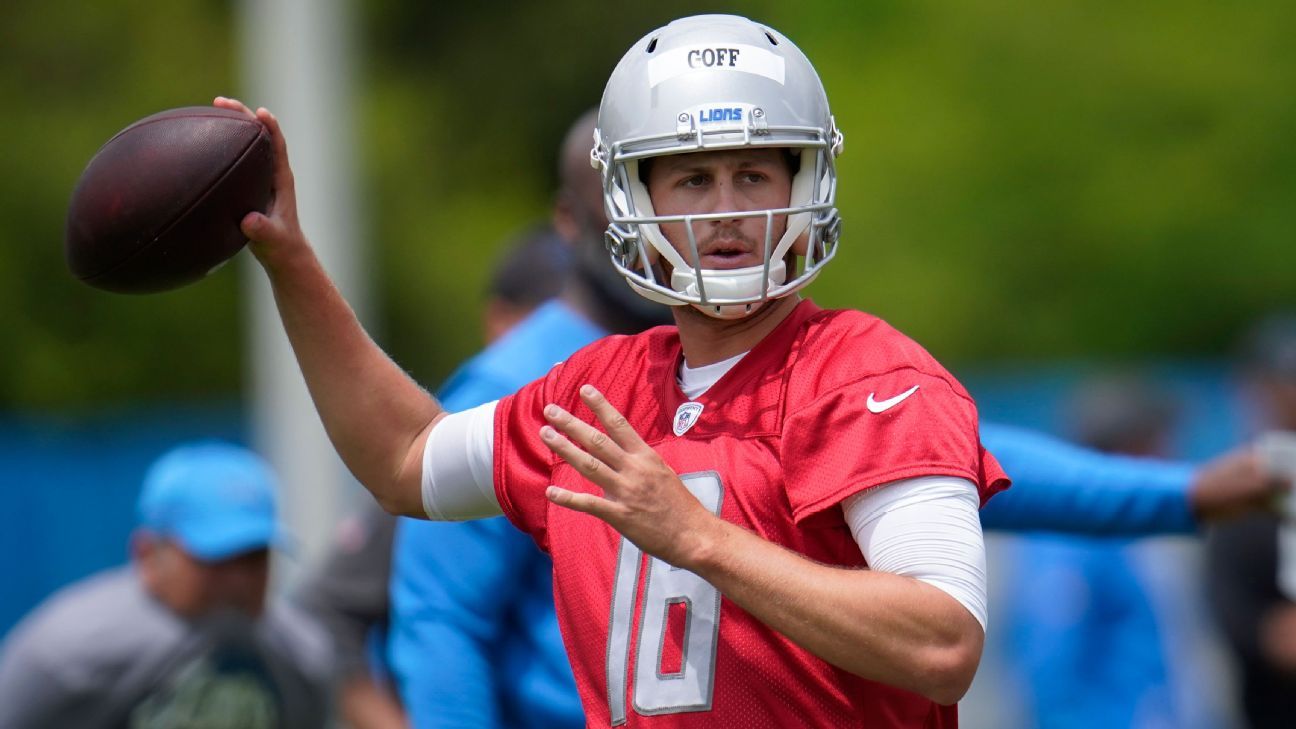 ALLEN PARK, Mich. — Outside of a couple weeks of OTAs and one day of mandatory minicamp, Jared Goff doesn’t have much experience with the Detroit Lions.

For context, Goff clarified that he wasn’t taking a jab at his former team, the Los Angeles Rams, he was simply emphasizing that things have gotten off to a great start in his new home.

“I don’t want this to turn into I’m saying this in regards to anything that’s happened in my past, it’s just been fun to be a part of that. There were times where it was like that in the past and there weren’t times where it was like in the past, it’s a little bit of both,” Goff said. “For this to start off on that foot, I think is the best thing I can say. It’s been fun. It’s been really cool and I’ve had a lot of fun having that ownership and being able to really use my strengths and use my knowledge and use what I know and at the same time continue to learn from these guys.”

Goff was a former No. 1 pick who was traded in the offseason for Lions great Matthew Stafford, which marked the first time that No. 1 overall draft picks were traded for each other in the common draft era (since 1967).

Goff has also reunited with new Lions general manager Brad Holmes, who spent his entire front office career in the Rams organization. Goff’s 42 wins over the last four seasons are tied with Russell Wilson for the second-most over that span, according to ESPN Stats & Information research, but that team success wasn’t on the same tier as his individual passing stats, which is something he hopes can change.

The Lions’ coaching staff certainly has a system that they are putting in place, but they haven’t hesitated to include Goff’s input on intricate details for a more collaborative experience.

There’s been many questions concerning Detroit’s new wide receiver corps, but Goff says he’s building “great” chemistry with the guys. Before reporting to Michigan for minicamp, he organized workouts with the group this offseason in Los Angeles to start building chemistry to be able to run the show in Motown.

“I want him to feel comfortable enough to say what’s on his mind, like, ‘Why are we not converting these?’ And either I’ll tell you, ‘This is why we’re not,’ or A-Lynn (says), ‘This is why we’re not converting these,’ or, ‘You know what, it’s a good idea. Let’s do it,'” Campbell said. “I want him to have open dialogue with us, I want him to have feedback. There’s things that if he feels like this is something he can do, and we feel good about putting it in his hands, that’s what we want to do, because I think if you do that and you feel like he can handle it, he really does gain a lot more ownership into it and the guys will feel that, the guys around him.

“That’s what we want. I don’t want to just put him in a box and say, ‘No, no, no. This is who you are. You have to stay in this confinement, and you cannot deviate out of this box whatsoever,” he added. “No, no, no.’ I want him to be able to come out of that box at times. You’ve got things that you feel like you can do, you can handle, we can handle as a team, then we’ll put on him whatever we feel like we can put on him because I think that will help him grow and become better as our field general.” 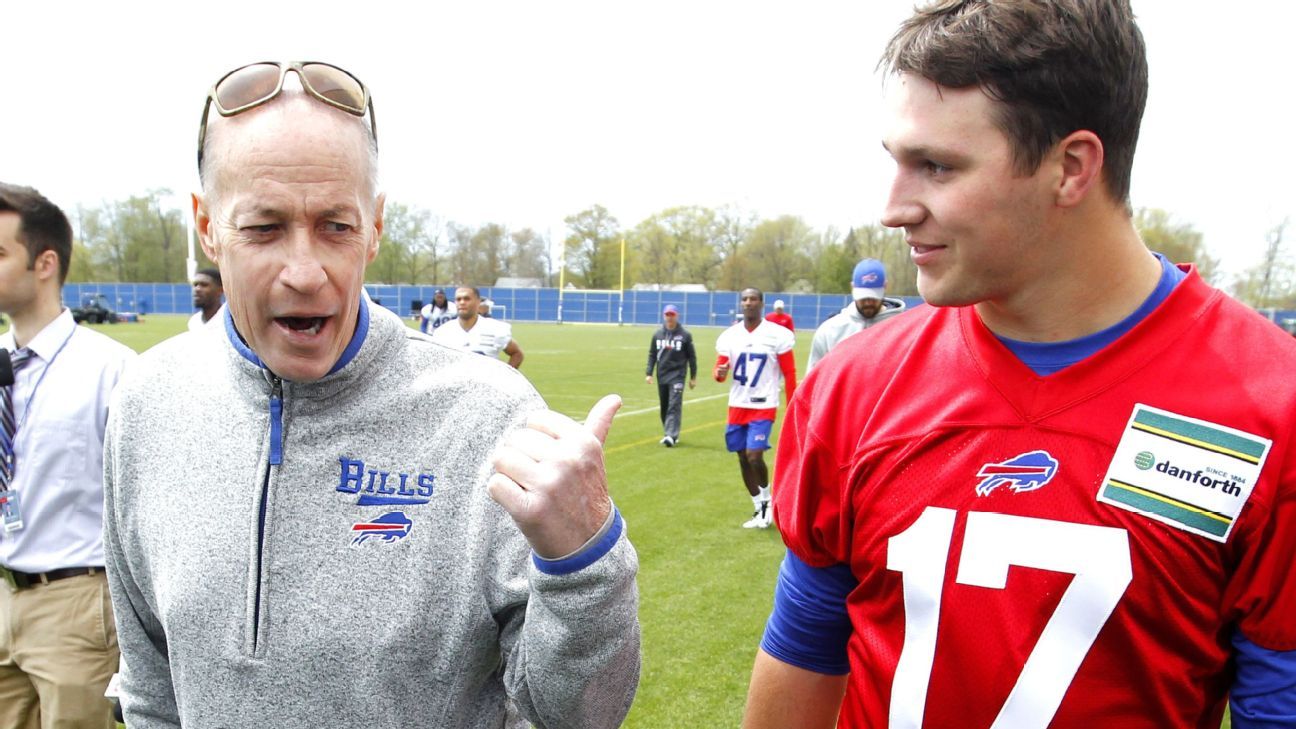 Allen and Bills defensive tackle Harrison Phillips spent a day with the Pro Football Hall of Famer and his wife, Jill, at an event at Hunter’s Haven Lodge in support of Kelly’s foundations — Hunter’s Hope and Kelly for Kids. The lodge in Ellicottville, New York, is named after the Kellys’ late son, who died at age 8 in 2005 after battling Krabbe Leukodystrophy.

Jill documented the weekend event, which included skeet shooting and dinner, on social media with a photo of Kelly handing a football to Allen. Inscribed on the ball were the quarterback’s signatures along with the words, “passing the torch.” Kelly and Allen also signed a few footballs for future charity events.

Allen officially took the Bills’ quarterback torch last year when he set single-season franchise records for completions (396), passing yards (4,544) and passing touchdowns (37), the latter of which belonged to Kelly.

Kelly, the Bills’ leader in career passing yards and touchdowns, told Jill last season: Allen “is going to break every record I have.”

The quarterbacks have been in constant contact since the Bills drafted Allen No. 7 overall in 2018, with Kelly publicly voicing support for Allen on several occasions.

“The constant thing he kept telling me was to take what the defense gives you, little tidbits here and there,” Allen said last season. “But more so about embracing Buffalo and embracing the city here and this community — the type of people and the food. It goes beyond football when we’re talking, but he’s been great with my development here. Not just as a player but as a person, as well. I couldn’t have asked to be in a better situation.”

Kelly made it a point in May 2018 to speak with Allen after his rookie minicamp, when Allen called him, “the greatest quarterback to play the game and obviously the greatest in Buffalo history.”

There is no debating Kelly is the best QB in franchise history, but Allen hopes to at least be in the conversation by the time his career is finished.

“That’s where I want to be. That’s eventually [the goal of] my career, to be regarded in the city of Buffalo like a Jim Kelly,” Allen said in 2018. “Every quarterback who plays here wants to be in the same sentence as him, just because of what he is and what he [means] to the city.”

Allen is entering his fourth NFL season after leading the Bills last season to their first AFC East title since 1995 — Kelly’s penultimate season in the league.

Allen is also in line for a contract extension that could make him one of the highest paid players in league history. Bills general manager Brandon Beane said the deal could be done as early as this summer, or negotiations could extend into next year; either way, there is mutual interest on both sides to make Allen a Buffalo Bill for the remainder of his career.

James Anderson thought he ‘wasn’t good enough’ on debut, as he closes in on England caps record

Jacksonville Jaguars QB Trevor Lawrence sits out some drills with hamstring tightness; should be fine for Thursday OTA