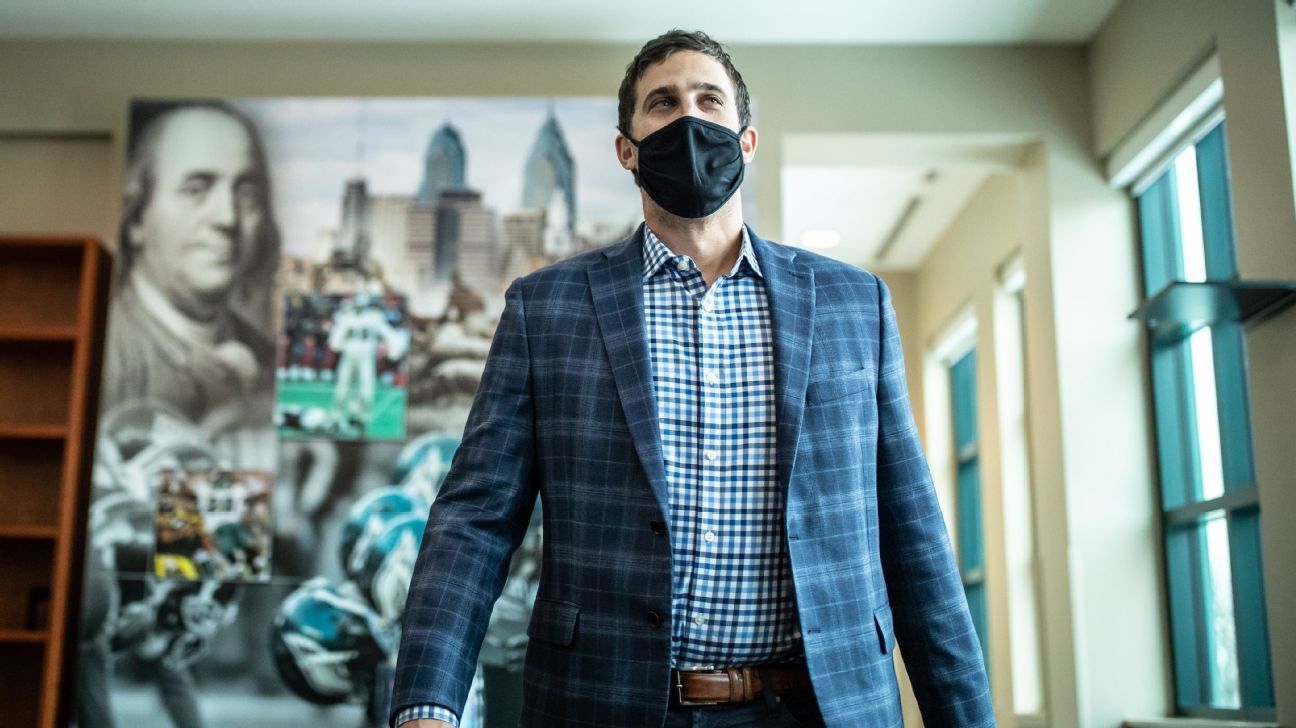 PHILADELPHIA — With the Carson Wentz saga taking up most of the oxygen in the Philadelphia Eagles‘ office, the coaching staff has become something of an afterthought.

But it’s a pretty big deal. First-time head coach Nick Sirianni, 39, has assembled a generally young group with some boom or bust potential, adding risk and intrigue to his mission of replacing Super Bowl winning coach Doug Pederson and getting a flailing Eagles team that finished 4-11-1 last season back on track.

Here are the primary coordinators/position coaches, followed by some analysis.

A collection of first-timers

The average age for head coaches and coordinators for the 2020 season was 49 years old. The youngest staff was the San Francisco 49ers at 38 years. Sirianni and his top lieutenants are south of that with an average age of 35.

The Eagles clearly went after up-and-coming coaches with innovative ideas who could grow on the job. But the lack of experience is concerning. Sirianni has never been a head coach or called plays before. Two of his top assistants, Gannon and Clay, have never been coordinators at any level, while Steichen was an O-coordinator for the Los Angeles Chargers for a season-plus.

A common thought was Sirianni would surround himself with some veteran coaches to help him navigate his role. He could still hire a senior advisor with prior NFL head-coaching experience to assist him, but as it stands, this is largely the green leading the green.

The most intriguing hire

Brian Johnson served as the University of Florida’s quarterbacks coach the past three seasons and was promoted to offensive coordinator in 2020, becoming the first African American in team history to hold that title. Florida quarterback Kyle Trask became a Heisman Trophy finalist this past season under his tutelage. Before that, Johnson helped maximize the potential of quarterback Dak Prescott at Mississippi State.

Johnson played under Jalen Hurts‘ father, Averion, at Baytown Lee High School in Texas, and has known Jalen since he was 4 years old. He later recruited Jalen to play at Mississippi State before Hurts ultimately chose Alabama. The level of trust presumably built over time should be beneficial as the tandem works toward further developing Hurts.

Offensive line coach Jeff Stoutland has a long track record of getting the most out of his players, but 2020 might have been his finest work. The Eagles finished tied for 10th in pass block win rate and second in run block win rate last season despite a rash of injuries that forced Philadelphia to use a record 13 different offensive line combinations over the first 14 games.

There was speculation Stoutland would rejoin coach Nick Saban at Alabama following the firing of Pederson, but he remains under contract in Philadelphia and will continue in the role he has had since 2013 when former coach Chip Kelly first hired him. Of all the staff moves, none were more important than retaining Stoutland.

One notable coach moving on is Ryan Paganetti, the Dartmouth graduate who was the primary voice in Pederson’s ear in-game for analytical-based decisions. The Eagles became trend-setters in the football analytics realm. In Pederson and Paganetti’s five years together in Philly, the Eagles went for it on fourth down 140 times, by far the most in the NFL (the Giants were next at 111). The Eagles were far and away the leaders in two-point conversion tries over that span as well with 41.

There is no clear successor to Paganetti in place at the moment. It’s a safe bet, though, that analytics will continue to influence game-day decisions. Eagles owner Jeffrey Lurie is a huge proponent of the practice, as is former Eagles coach Frank Reich, who served as Sirianni’s mentor in Indianapolis. 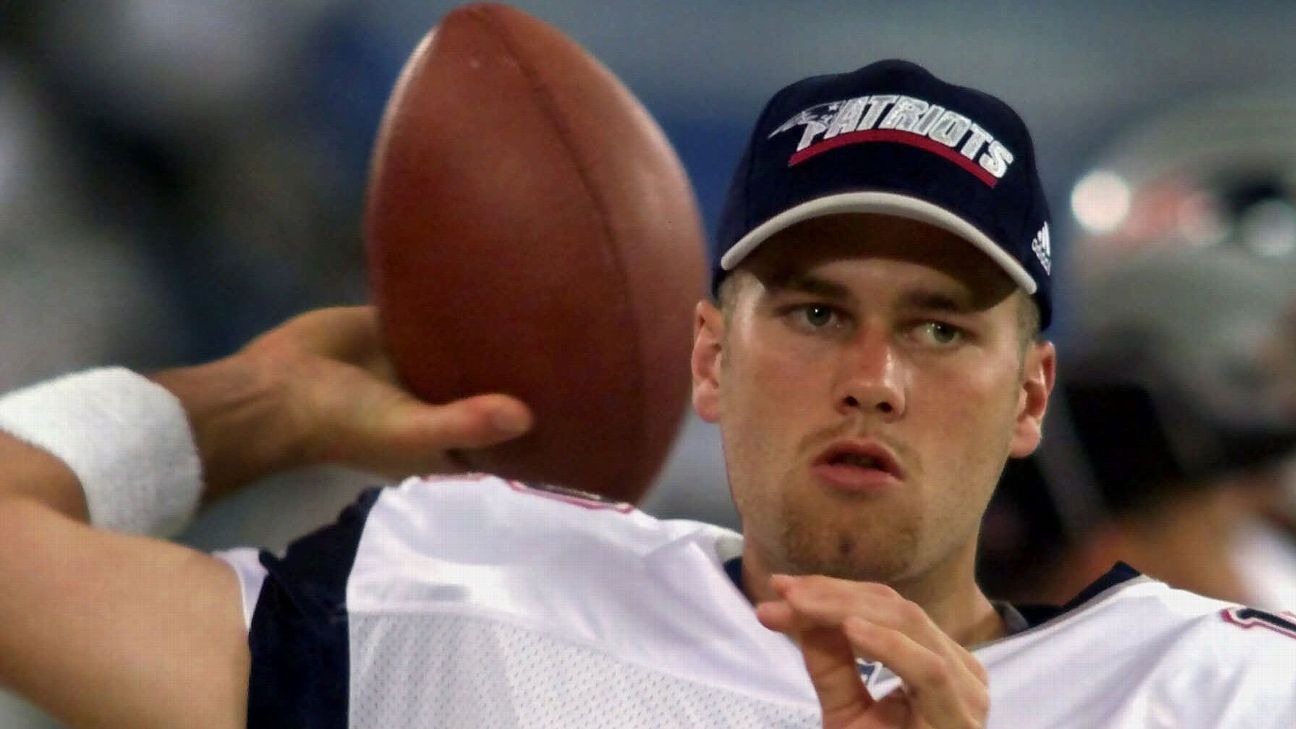 A Tom Brady rookie card sold for a record $1.32 million on Thursday on PWCC Marketplace, an online auction house and repository for cards.

The autographed 2000 Playoff Contenders Championship Ticket card was graded an eight with a 10 grading on the signature. It was purchased by James Park, a known card collector and noted Brady fan.

“I lived in Boston for 10 years and so am a huge fan of Brady,” Park said in comments posted to PWCC Marketplace’s Instagram account. “I’ve also had a love of collecting cards since I was a kid. Given Brady’s uncontested status as GOAT in football, this card is an important piece of sports history and of any collection.”

The $1.32 million price tag is believed to be the highest price paid for a football card, eclipsing the previous record by nearly $500,000. As the card marketplace continues to rise in interest and value, this sale soared past a recent Patrick Mahomes card that sold for $861,000 in the beginning of February.

The 2017 National Treasures autographed Mahomes card was graded a nine and was one of only five of that specific card. That sale broke the previous record, which was held by another Brady card that sold for $555,988 in January.

This most recent record might be short-lived given the way the industry is headed, and considering there is already a similar card being sold at Lelands auction house. The same Brady card is up for auction, but it’s graded an 8.5 with the signature graded a nine.

Another Brady rookie card from the 2000 Playoff Contenders Championship Ticket collection, graded a Mint 9 with a 10 grading on the autograph, sold for $400,100 just two years ago. At the time, it was the highest auction price in history for a football card. 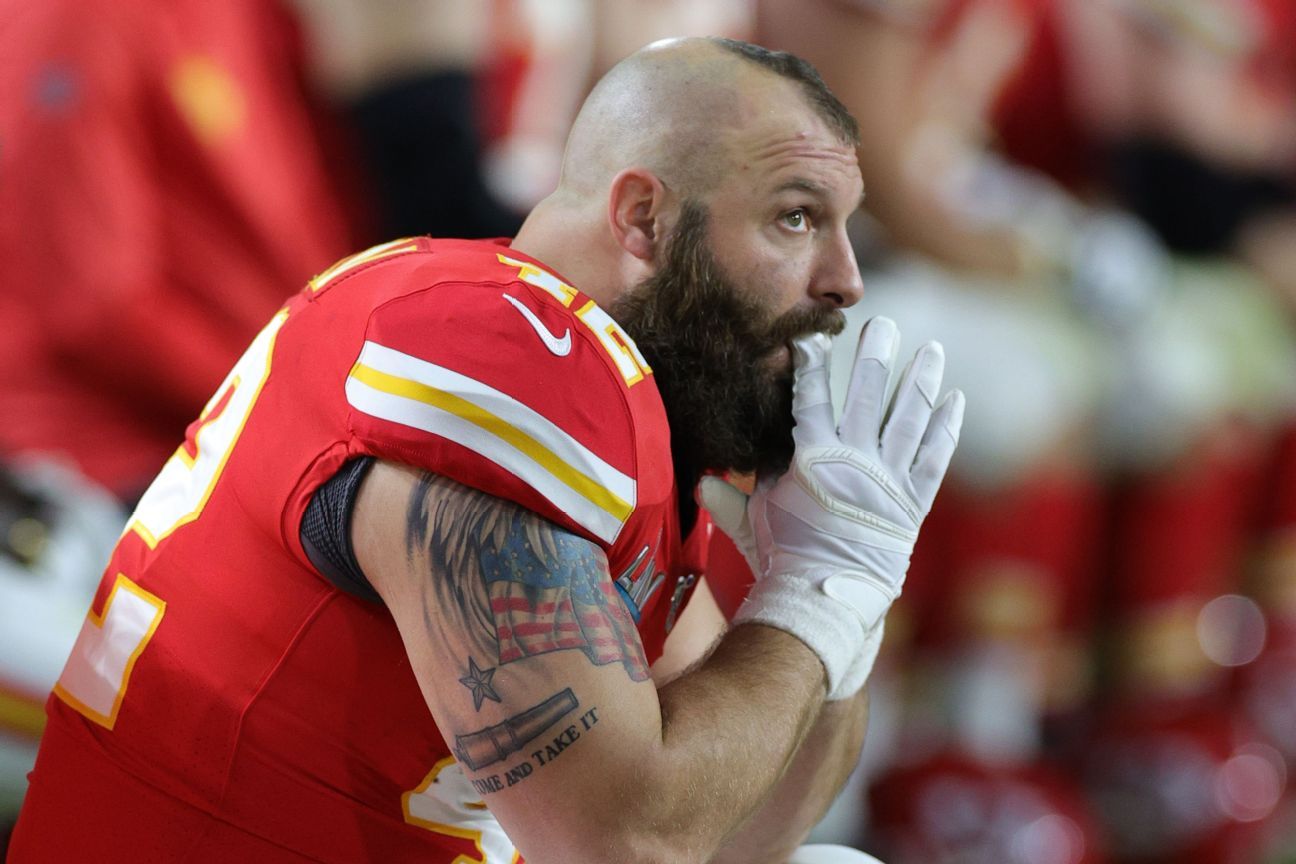 “Kansas City, thanks for all the memories,” Sherman said in a video he posted to Twitter. “It’s been a great run: eight years, Super Bowls. But it’s on to the next chapter.”

Sherman, 32, played eight seasons for the Chiefs, mostly on special teams. Occasionally, the Chiefs would get him the ball, and he often delivered. He rushed for 73 yards, caught 53 passes and scored five touchdowns.

Sherman was selected in 2018 to play in the Pro Bowl.

He joined the Chiefs in 2013 in a trade with the Arizona Cardinals, for whom he played two seasons. 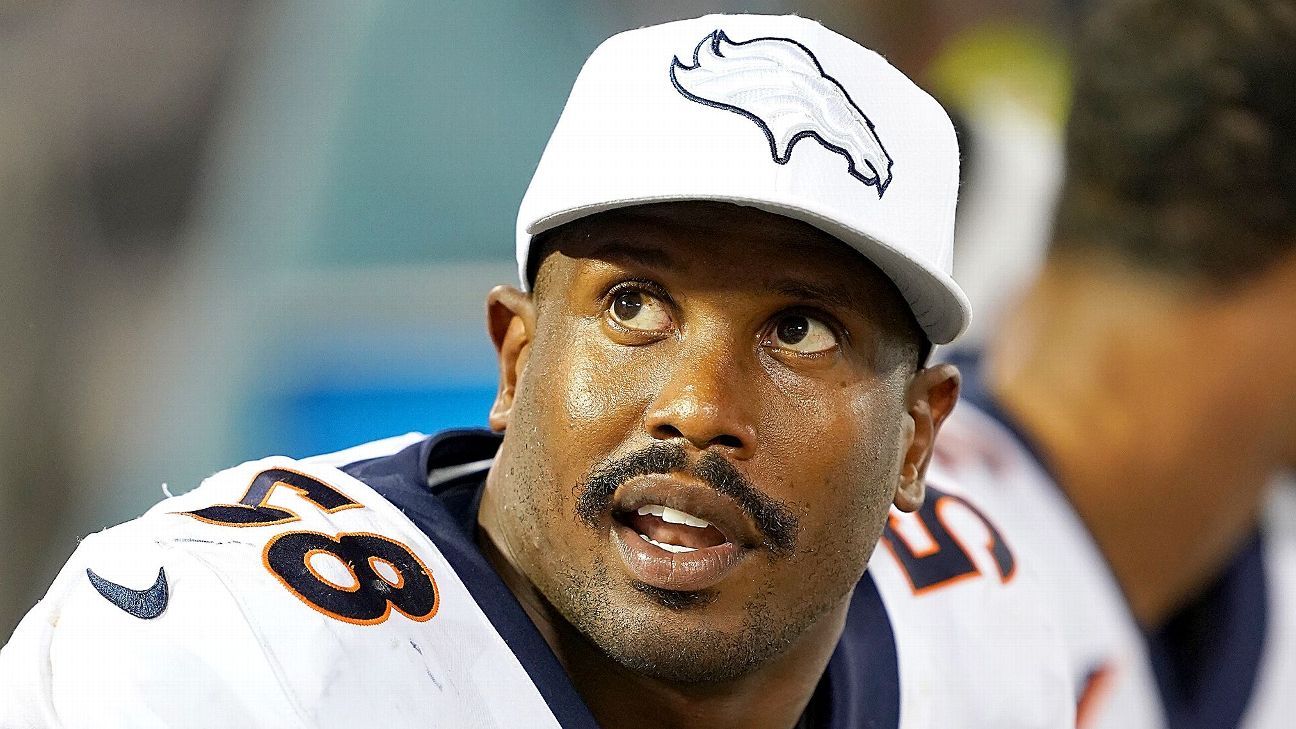 ENGLEWOOD, Colo. — With a decision about Von Miller‘s future looming, Denver Broncos general manager George Paton said Thursday that the team wants the linebacker back for 2021 but is waiting to hear more on potential legal issues Miller may have and did not rule out a discussion about a pay cut for him to return.

“We’re still working through it with Von, his agent, and in regards to the legal process, we’re just going to let the legal process play out,” Paton said. “But obviously it’s a serious situation, but we want to let it play out before we comment on that.”

Miller, an eight-time Pro Bowl selection and the Super Bowl 50 MVP, has an option clause in his contract that if the Broncos pick it up would guarantee $7 million of Miller’s $17.5 million base salary and engage the final year of a six-year, $114.5 million deal he signed in 2016.

The Broncos, as well as Miller, are still waiting on a decision from the district attorney in the 18th Judicial District in suburban Denver to determine whether Miller will be charged in the wake of an investigation by the Parker, Colorado, police department. Neither the police nor the district attorney’s office has released details of what specific charges Miller could face.

Miller has not responded to requests for comment. If charges are filed, Miller could face the prospect of league discipline as well.

Asked whether Miller’s return could also hinge on a salary cut, Paton said:

“We want to bring Von back; we’re still working through that, I don’t want to get into everything, but we want to bring him back. Obviously the legal process, what he’s going through, it’s a serious situation, obviously, and I don’t know all the details, but we respect what’s going on. We do want Von back.”

Miller missed all of the 2020 season after an ankle injury just days before the season opener. At the time, coach Vic Fangio said he had expected Miller to have “a hell of a year.”

Miller’s eight sacks in 2019 were his lowest total since 2013, when he finished with five sacks after serving a six-game suspension for violating the league’s substance abuse policy and then suffering a torn ACL in December of that year.

Miller leads all active players who were on NFL rosters last season with 106 sacks.

Miller is the longest-tenured Broncos player and was John Elway’s first draft pick as the team’s top football executive. Elway stepped away from the general manager’s role earlier this year before Paton was hired in January.

“[I] did a deep dive with Drew … very talented, was inconsistent at times, has a lot to work on, but I’ve spoken with Drew … he really wants to be great,” Paton said. “We’re always going to bring in competition at every position, quarterback as well, but I like the track Drew’s on … He does have all the traits you look for in a quarterback.”

Paton also said that he would not publicly discuss any quarterback on another team’s roster, such as Deshaun Watson, and that the Broncos would consider using the No. 9 pick in the draft on a quarterback “if it’s the best player on the board, we’re going to take him.”

Both Paton and Fangio said that they had spoken with James and that James was set to return to Denver area in the coming weeks to train.

Paton added that he was already trying to re-sign defensive end Shelby Harris, who will be an unrestricted free agent, and that he has talked to safety Kareem Jackson‘s representatives. Jackson has an option year in his contract for 2021 that the Broncos have to decide to exercise by the start of the new league year.