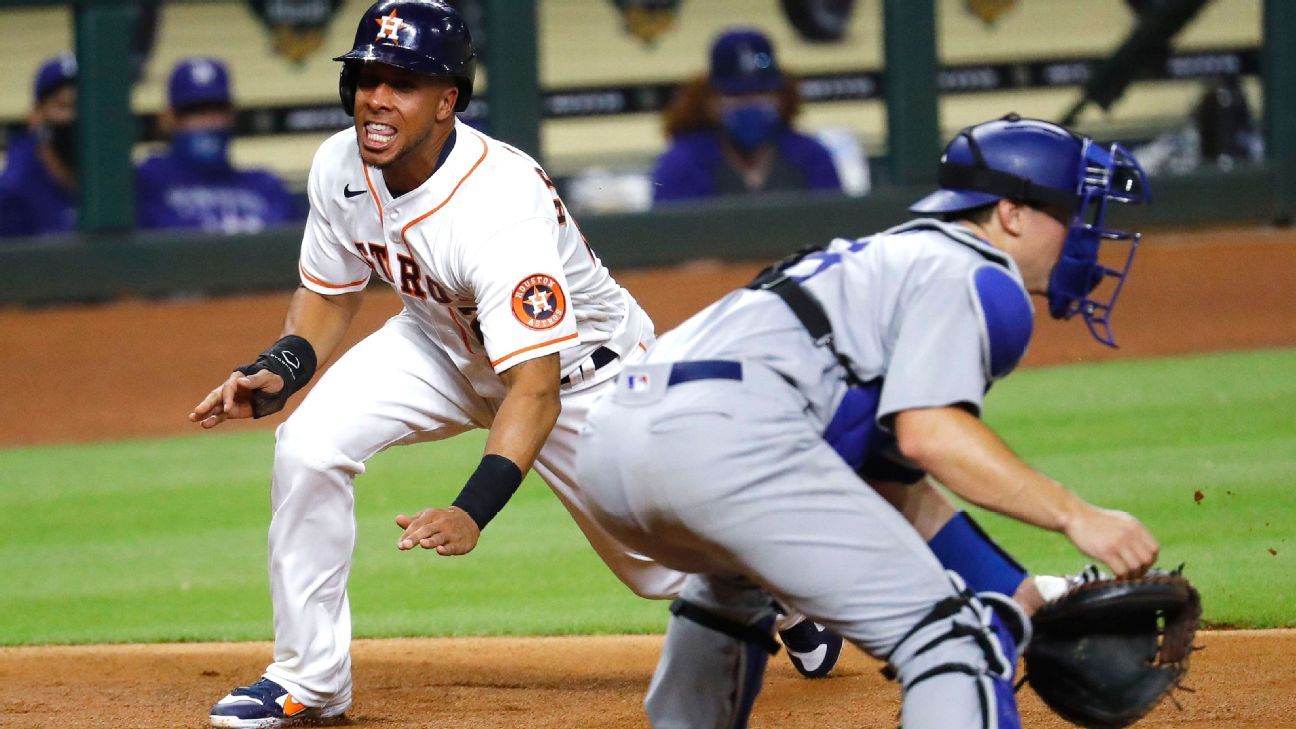 When the Los Angeles Dodgers and Houston Astros met in July, all hell broke loose when L.A.’s Joe Kelly threw up and in on Alex Bregman and Carlos Correa. Benches cleared, pouty faces were made, suspensions were handed out.

The teams meet again Sunday night (8 ET on ESPN), and we asked baseball reporters Alden Gonzalez and David Schoenfield some key questions to get you ready for the game.

If you had to place a $1,000 bet on who would win the NL pennant, who would you take — the Dodgers or the field?

Schoenfield: There’s a reason the MLB postseason is often referred to as a crapshoot: It’s hard to predict the winner. The best teams usually win in the NBA or NFL, or at least make the Finals or the Super Bowl, but that’s far from the case in baseball — even though some recent superteams have fared well in the postseason (the 108-win 2018 Red Sox, the 101-win 2017 Astros and the 103-win 2016 Cubs all won the World Series). But last year’s 92-win Nationals upset the 106-win Dodgers, and this year’s best-of-three first round makes an early upset even more feasible. So, I hate to say this because the Dodgers are the class of the NL, but I’d put my $1,000 on the field. That will look good after the eighth-seeded Giants stun the Dodgers in the first round.

From the games that matter most to what the matchups would be if the season ended today, we get you ready for baseball’s wild sprint to the finish.
MLB Playoff Push »

Gonzalez: I can’t help but agree with Dave here. The Dodgers nearly doubled the Nationals’ regular-season run differential last year and were still eliminated by them in a five-game series. This year, the opening round will be a best-of-three with no true home-field advantage, further heightening the importance of inevitable outliers. It’s actually pretty remarkable how much better the Dodgers are than their NL counterparts. But all they have to do is lose one game and all of a sudden their season will be on the brink. If Clayton Kershaw is hampered by the first-inning home runs that plagued him for most of 2019, or if Walker Buehler‘s blister keeps him from properly commanding his breaking ball, all of a sudden a mighty Dodgers team will be vulnerable against a far inferior opponent. Small sample sizes are the Dodgers’ greatest concern at this point. It might be their only one.

How much of an issue is the Dodgers’ lack of an experienced starter behind Clayton Kershaw and Walker Buehler?

Schoenfield: It’s not the lack of experience that bothers me — postseason history is ripe with inexperienced starters coming up big — but minor concerns about the rotation in general. Kershaw has been the team’s most consistent starter in 2020, but let’s just say his postseason history is checkered. Buehler has a 3.77 ERA but a 4.77 FIP. Dustin May has a 2.88 ERA but a 4.53 FIP. Julio Urias has a 3.86 ERA and 4.01 FIP. Tony Gonsolin actually has a strong case to be one of the top three starters with his results so far in limited action (0.76 ERA, 2.38 FIP before he gave up three runs in five innings Thursday). Look, maybe some of those FIP numbers are misleading. The Dodgers do have a great defense. May doesn’t have a big strikeout rate but is pretty good at inducing soft contact. We’re nitpicking here, but I’d certainly like to see Buehler get locked in before going all-in on the Dodgers in October.

Gonzalez: Keep this in mind: The Dodgers’ bullpen is especially deep this year. Kenley Jansen has at times resembled his old, dominant self. Behind him, the trio of Blake Treinen, Kelly and Brusdar Graterol are as devastating as it gets in terms of pure stuff. Lefties Jake McGee, Adam Kolarek and Caleb Ferguson have also been very effective. And Pedro Baez, an important linchpin for that bullpen in recent years, should make an impact soon enough. In a short series, starters will naturally have short leashes, which means bullpens will factor prominently. The Dodgers will have the advantage here against practically everybody.

Despite some recent struggles, the Astros will be hard-pressed to lose the second playoff spot in the AL West. How far will they get in the postseason?

Schoenfield: This certainly doesn’t look like their year, given the injuries to the likes of Justin Verlander and Yordan Alvarez and the bullpen, which has had to rely almost entirely on rookies. But look between the cracks, and you see they still have Zack Greinke, Framber Valdez has pitched very well, Cristian Javier has had his moments and they’re hoping for Verlander to make it back. The offense is still second in the AL in runs per game. As the second-place team in AL West, they probably will end up as the No. 6 seed, so they would play the worst of the three division winners. If they play the A’s (who never come up big in October) or the White Sox (15-2 against the Tigers and Royals, under .500 against everybody else), I might pick the Astros. Anyway, a lot obviously rides on Verlander’s health and I’m not sure they have the pitching depth to reach the World Series, but it wouldn’t shock me to see them reach the ALCS.

On ESPN and the ESPN App; all times ET.
Don’t have ESPN? Get instant access.

Gonzalez: Dave hit on it: It will hinge largely on what, if anything, Verlander can contribute. Astros manager Dusty Baker told reporters earlier this week that the team has mapped out a schedule for Verlander the rest of this month and sounded optimistic that he could return before the end of the regular season. If Verlander is close to his dominant self, and you pair him with Greinke, who’s still as good as you’d expect, and that offense, which remains fierce, then the Astros can compete with the A’s, White Sox, Rays and everybody else in the AL. But if Verlander isn’t Verlander, I don’t see how they can hold up in this wild tournament all month. It hardly ever comes down to one player like that, but the AL is that good this year.

How A.J. and Kate Pollock faced their daughter’s premature birth during COVID-19 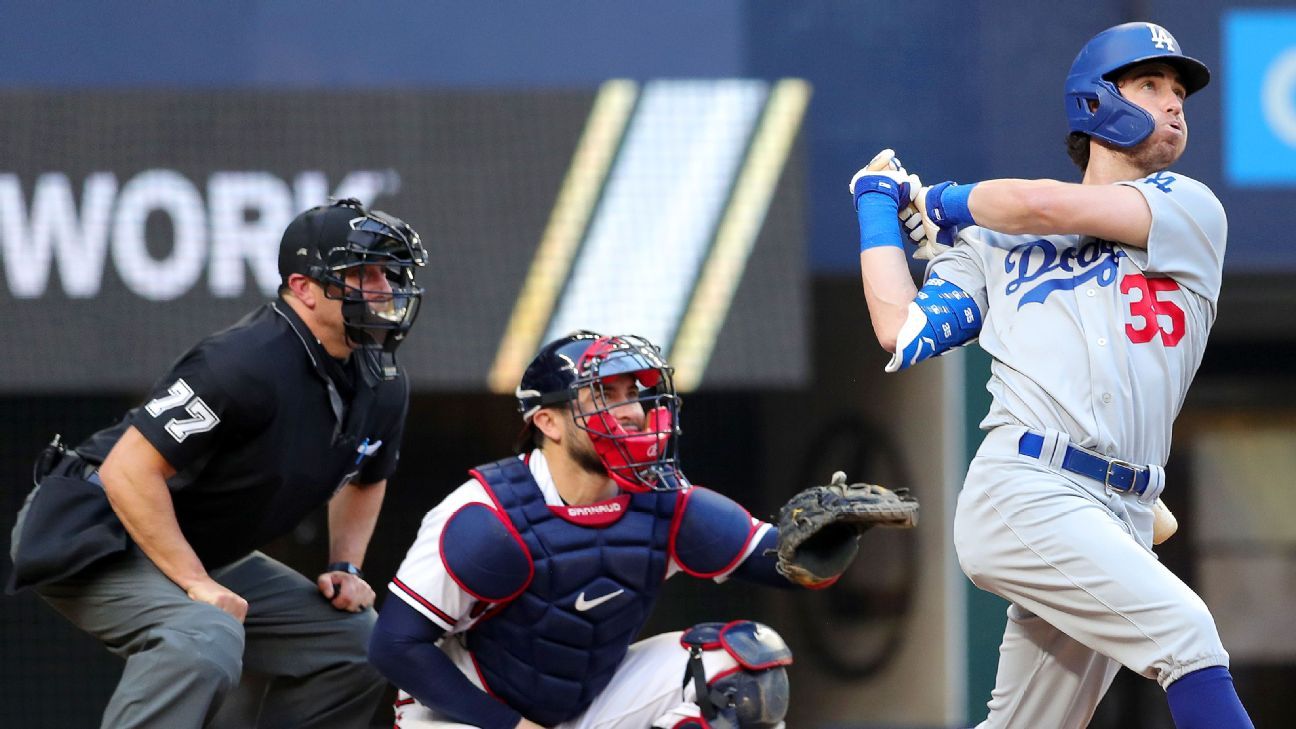 ARLINGTON, Texas — Cody Bellinger was moved to designated hitter a little more than an hour before Game 4 of the World Series on Saturday because of stiffness in his lower back.

Los Angeles Dodgers manager Dave Roberts, speaking to local reporters, said Bellinger received treatment at the ballpark and tried to move around but his back did not cooperate.

Roberts called Bellinger’s back issue “a day-to-day thing” and said Bellinger would return to the outfield for Sunday’s Game 5 if his back loosens up properly.

Bellinger is one of the best defensive center fielders in the game, a major benefit given the expansive outfield at Globe Life Field. Pollock came up as a center fielder but does not cover as much ground.

Roberts told reporters he considered moving Mookie Betts from right to center but decided otherwise because it would put multiple players out of position. 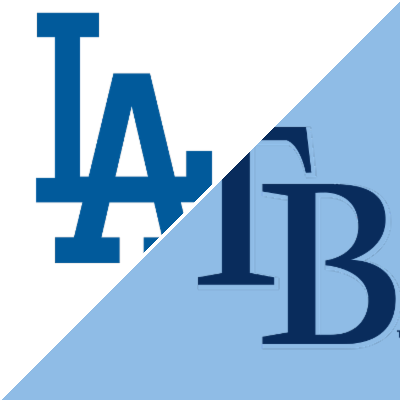 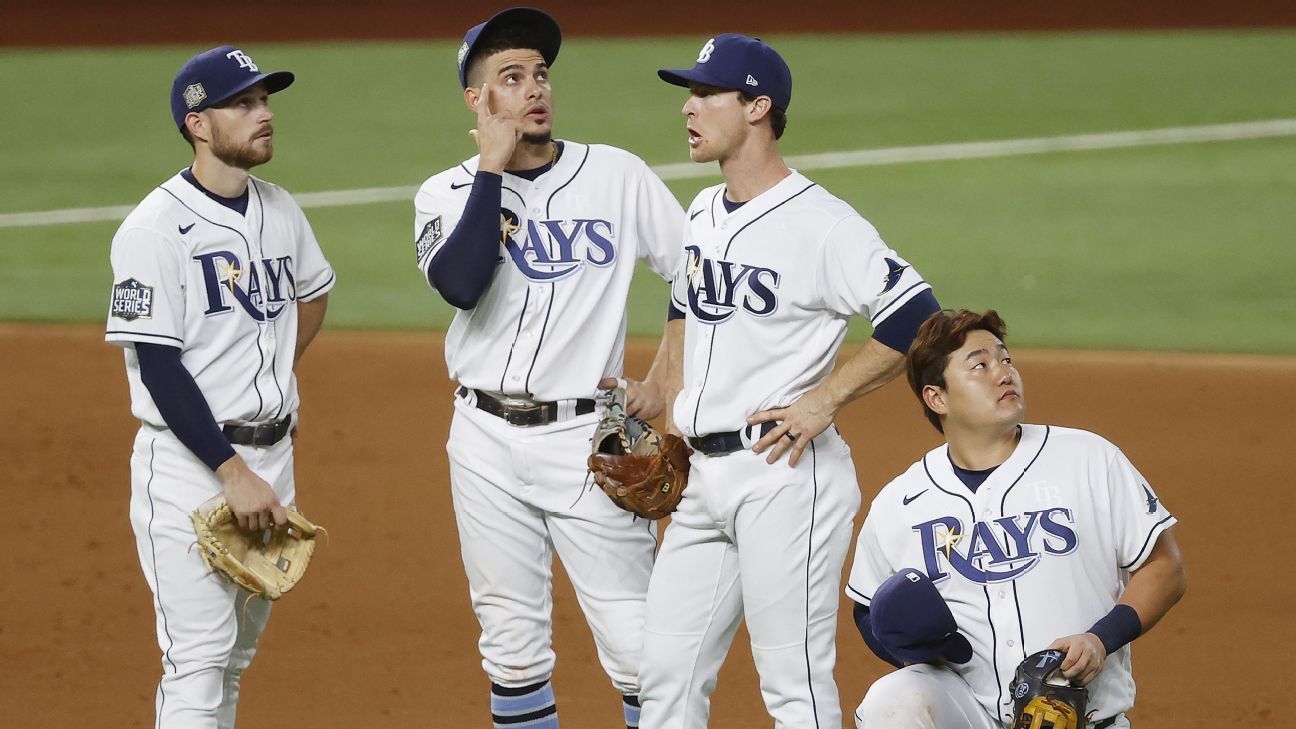 ARLINGTON, Texas — In an effort to jump-start his offense, manager Kevin Cash is stacking the top of the Tampa Bay Rays‘ lineup with right-handed hitters and dropping second baseman Brandon Lowe to fifth in the order for Saturday night’s Game 4 of the World Series against the Los Angeles Dodgers.

“I like the mix [at the top],” Cash said. “We have a disciplined approach there with Yandy [Diaz]. Randy [Arozarena] is the best hitter on the planet right now. Manny [Margot] and [Mike] Brosseau are contact-oriented guys. Brosseau had a tremendous year against left-handed pitching.”

The Rays will face Dodgers lefty Julio Urias in Game 4 as they attempt to tie the series at two games apiece. They’ve struggled on offense all postseason, with Walker Buehler the latest to shut them down in a Game 3 loss on Friday.

Diaz will lead off, followed by righties Arozarena, Brosseau and then Margot. Margot hit just one home run during the regular season.

“I know it’s a little unique with Manny hitting fourth … but it’s a guy that put the ball in play, and hopefully Yandy, Randy or Bross, or two of them, or all three of them, are on base for him,” Cash said.

It’s the first time this season Margot will bat fourth and just the second time Lowe will bat fifth. Lowe struck out three times Friday. Game 3 was the first time all year the Rays started the same lineup in consecutive games, but that’s as long as that batting order lasted.

“We need it to happen tonight,” Cash said of his offense. “There’s a bunch of guys that are fully capable of getting going, and maybe not look for that one big hit but piece together some things.”

After Game 3 on Friday and again before Game 4 on Saturday, Cash stressed the need for the Rays to score early. They’re a major league-best 31-7 when they accomplish that goal this season. Stacking the righties might be their best chance to grab the early lead.

“With Urias, our focus is not doing him any favors on expanding on his arm-side fastballs where he gets a lot of swing up and away,” Cash said. “Put some pressure on him to make some good pitches and be ready to hit.”

With no ‘future with Pakistan’ in Test cricket, Salman Butt turns focus to non-playing role