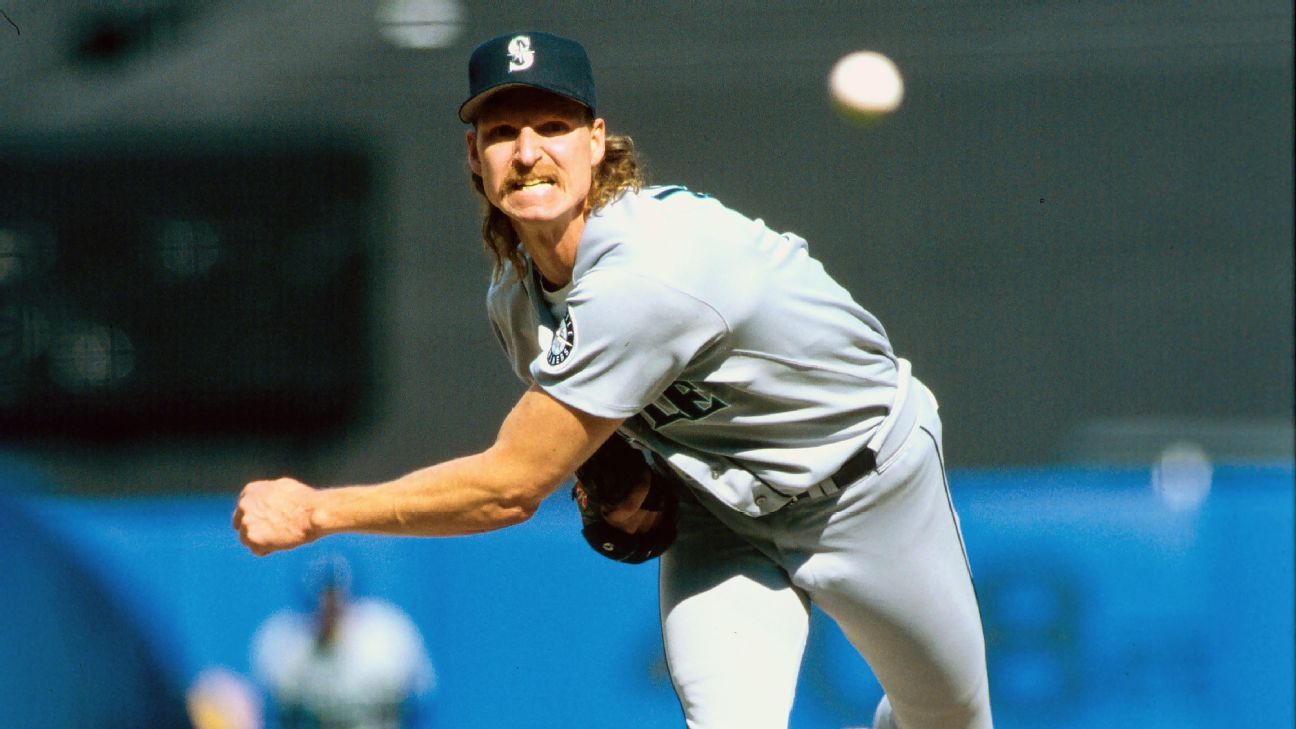 ON THIS DATE IN 1990, Randy Johnson threw his first no-hitter.

At the Hall of Fame induction ceremony in 1999 featuring, among others, Nolan Ryan, I interviewed Ted Williams about what it would be like to face Ryan. Instead, for five minutes, Williams went in another direction, saying, “The guy I’d really like to face is Randy Johnson. Left-hander. That slider. Man, I’d love to try to hit that slider. And I would love to face someone that big. He’d be my biggest challenge. That’s why I’d love it.”

That’s how good Randy Johnson was. His second no-hitter was a perfect game: He was the oldest pitcher (40) ever to throw a perfect game. He won five Cy Young Awards, including four in a row with the Arizona Diamondbacks; he finished second three times and third once. He won 303 games with a .646 winning percentage, he won four ERA titles and finished second to Ryan in career strikeouts. He was as dominant as any pitcher of his or of any era. He is at least in the conversation as the greatest left-handed pitcher of all time.

“No left-handed hitter other than Tony wanted any part of that slider,” Adam Dunn said, laughing.

Johnson was legendary, all 6-foot-10 of him.

“He is so tall,” veteran coach Rich Donnelly once said, “he doesn’t have a pickoff move to second, he just reaches out and touches the runner.”

Johnson accidentally killed a dove with a pitch in a spring training game. He purposely threw over the head of John Kruk in the 1993 All-Star Game; Kruk patted his heart as if to keep it from beating out of his chest. In the 1997 All-Star Game, Larry Walker put his helmet on backward and got into the right-handed batter’s box. In the 2001 World Series against the Yankees, Johnson started Game 6, won it, then pitched in relief the next day in Game 7; from then on, the toughness in a pitcher would be measured by the Unit.

So many hitters, when listing their least favorite at-bats or their worst at-bats, mention Johnson. He might be the scariest and the most intimidating pitcher the game has ever seen. Jeff Huson, a former infielder and a left-handed hitter, once said, “What’s the worst thing that Michael Jordan can do to you? He can dunk on you. So what? What’s the worst thing Randy Johnson can do to you? He can kill you.”

Other baseball notes for June 2

LOS ANGELES — Cody Bellinger is healthy, his mind is right and he’s ready for whatever baseball’s shortened 60-game season brings.

Bellinger is looking to pick up where he left off after a stellar performance for the Los Angeles Dodgers in 2019. The reigning National League MVP batted .305 with 47 homers and 115 RBIs for the NL West champions last year.

“Everything is going to be so weird this year. It’s going to be fun,” he said Thursday on a video conference call. “It could be a once-in-a-lifetime thing, so I’m just taking advantage of what we got.”

What the Dodgers have in addition to Bellinger’s offensive power is Mookie Betts, the 2018 American League MVP with Boston. He joins a team that led the NL with 279 homers last year, but lost to Washington in the division series.

Bellinger, who turns 25 on Monday, isn’t putting pressure on himself to repeat last season’s statistics.

“I just want to focus on what I’ve got to do in order to be good. I’m understanding that a little more,” he said. “Just go out and be as consistent as I can, fine-tune the things that make me really good.”

Bellinger was the NL Rookie of the Year in 2017, and then struggled the following year before rebounding in 2019.

“It was tough sledding for Cody for quite some time coming off that rookie campaign, and you start wondering, ‘Was it real?’ You question the confidence, the mechanical piece,” manager Dave Roberts said. “Everything he does now is with conviction and intent. There’s a talent component, but also there’s a process and preparation component that sometimes you have to struggle to understand the value of it.”

Bellinger spent the last few months working out in his home state of Arizona after spring training came to a halt in March because of the coronavirus pandemic. He focused on fine-tuning his swing.

“I just got to work on it in a stress-free environment,” he said. “Just minor things I think about throughout the year. Figuring out why I was so good and remembering the feeling and not getting too caught up on last year. You’re always evolving. I feel really good with where I’m at this year. It could be a blessing in the long run.”

Bellinger and Roberts said hitters’ concerns about the new batter’s eye in the renovated outfield pavilions at Dodger Stadium are being addressed. First baseman Max Muncy hurt his left ring finger after he said he couldn’t see a pitch that hit him earlier in the week.

“It was a little low,” Bellinger said, “and the seats weren’t blocked off, so if there were fans there, the pitcher’s arm would potentially come out of the stands.”

Roberts said the batter’s eye “is still a work in progress” that may involve changing the paint scheme to matte from gloss, among other things.

During the first week of summer camp, Bellinger has gotten used to drinking out of his own cooler, not having teammates on either side of his locker and having everyone hear what the players say on the field in an empty stadium. Coming from Arizona, where masks in public were not always mandatory, he’s had to don one in California, where they are required.

“I don’t think it’s a hassle to wear a mask,” he said. “If your breath stinks, it sucks. But it just means you brush your teeth a little more.”

Game notes
RHP Tony Gonsolin showed up at camp for the first time Wednesday, appearing on the field in uniform for an evening intrasquad scrimmage. He was one of seven players absent from camp earlier in the day. Roberts said Thursday he could not discuss the reason for Gonsolin missing the first week of camp and the reliever has not yet been made available to media. With LHP David Price choosing not to play this season, Gonsolin might have a shot at the rotation. 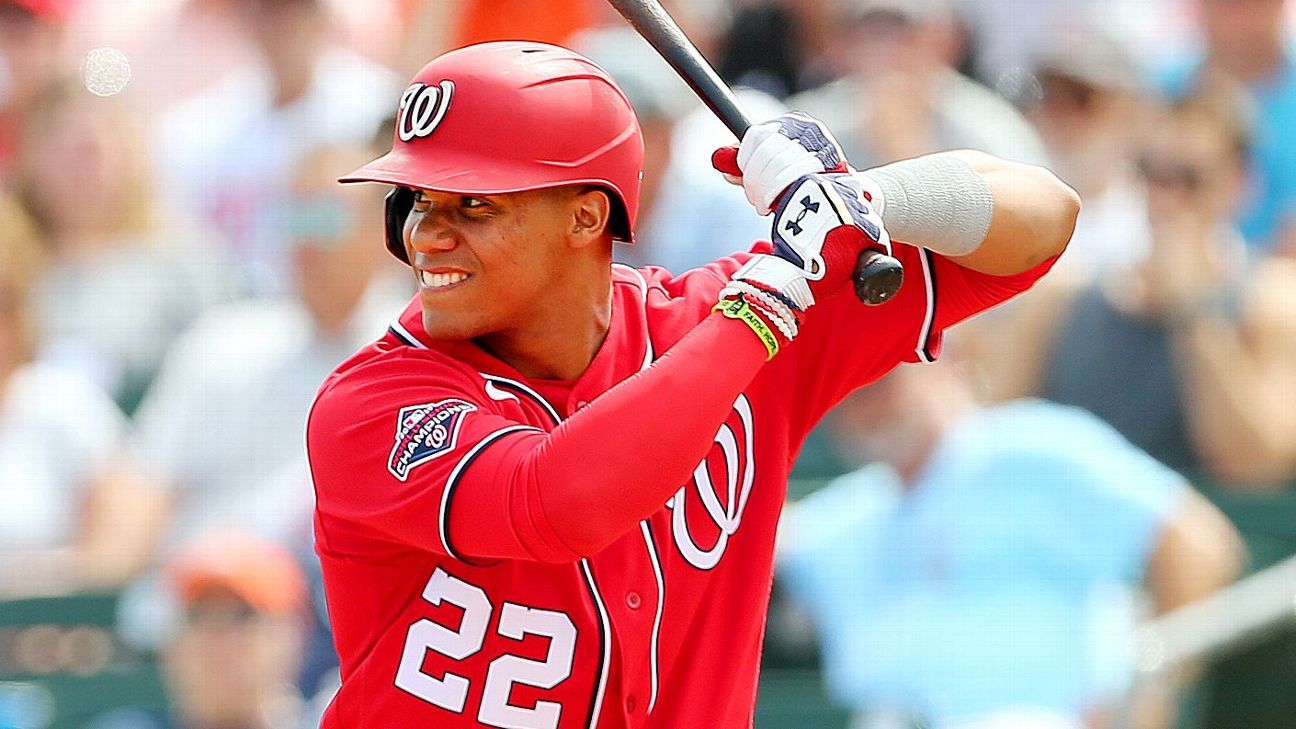 While this season will be reduced to 60 games, and there will be no fans in attendance at least initially, because of the shutdown forced by the coronavirus pandemic, teams are in camp preparing for Opening Day on July 23 and 24.

Here’s a look at the Opening Day schedule for every team, plus previews, predictions and more as the long-awaited ballgames approach.

Baseball is back, and so is fantasy! Get the gang back together, or start a new tradition.
Everything you need to compete >>

• 60-game predictions: Who will thrive, struggle?

Buster Olney’s top 10 at every position

Phillies All-Star catcher J.T. Realmuto ‘not too worried’ about next contract 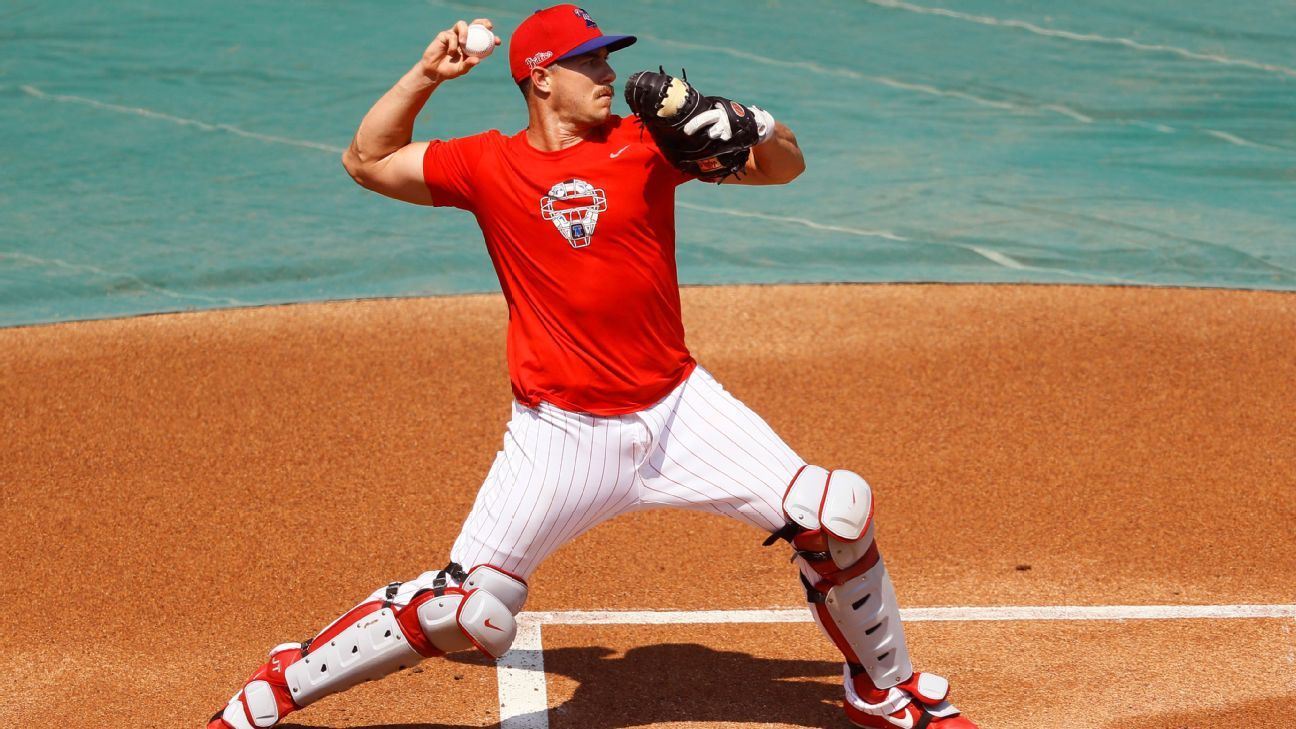 The All-Star catcher and the Philadelphia Phillies had preliminary discussions about a long-term deal before the coronavirus pandemic, but talks between the two sides haven’t progressed since baseball returned last week.

Realmuto is eligible for free agency after the season unless the Phillies sign him before he can test the market. He’s expected to seek at least $20 million per season.

“It definitely concerns me, not necessarily for myself, but for the free-agency class as a whole,” Realmuto said Thursday. “The top guys usually find a way to get their dollars. Teams are going to want them. Maybe it’s not 20 teams in on you — maybe five or 10. A lot of teams will be able to look at this as a time to take advantage and actually go for it instead of backing off, because half the league will try to cut revenue and save money and the others will look at it as an advantage to press forward. It could affect free agency as a whole, but for myself, I’m not too worried.”

Realmuto hit .275 with 25 homers and 83 RBIs and led the league with 43 runners thrown out in his first season in Philadelphia in 2019, earning his second straight All-Star selection. He was acquired from Miami shortly before spring training last year in a deal that sent Philadelphia’s top pitching prospect, Sixto Sanchez, to the Marlins.

Realmuto quickly has become Bryce Harper‘s favorite teammate in Philly. Harper was on base when Realmuto hit a homer in a scrimmage Wednesday. He crossed the plate, looked up in an empty stadium and screamed: “Sign him!”

Realmuto lost his arbitration case in February and received a raise from $6.05 million to $10 million instead of his $12.4 million request. He said he doesn’t harbor any resentment over losing.

“I love this organization,” he said. “They’ve been great to me and my family since I showed up. From top to bottom, they’re good people and they care about baseball. That’s important to me.”

Phillies manager Joe Girardi called Realmuto a “happy-go-lucky” guy who “loves to be on the field,” and he doesn’t expect the contract situation to be a distraction.

“He’s the same person every day, happy to be here, wants to play and help the team win,” Girardi said. “When he came back from his arbitration case, his personality hadn’t changed and he had a smile on his face.”