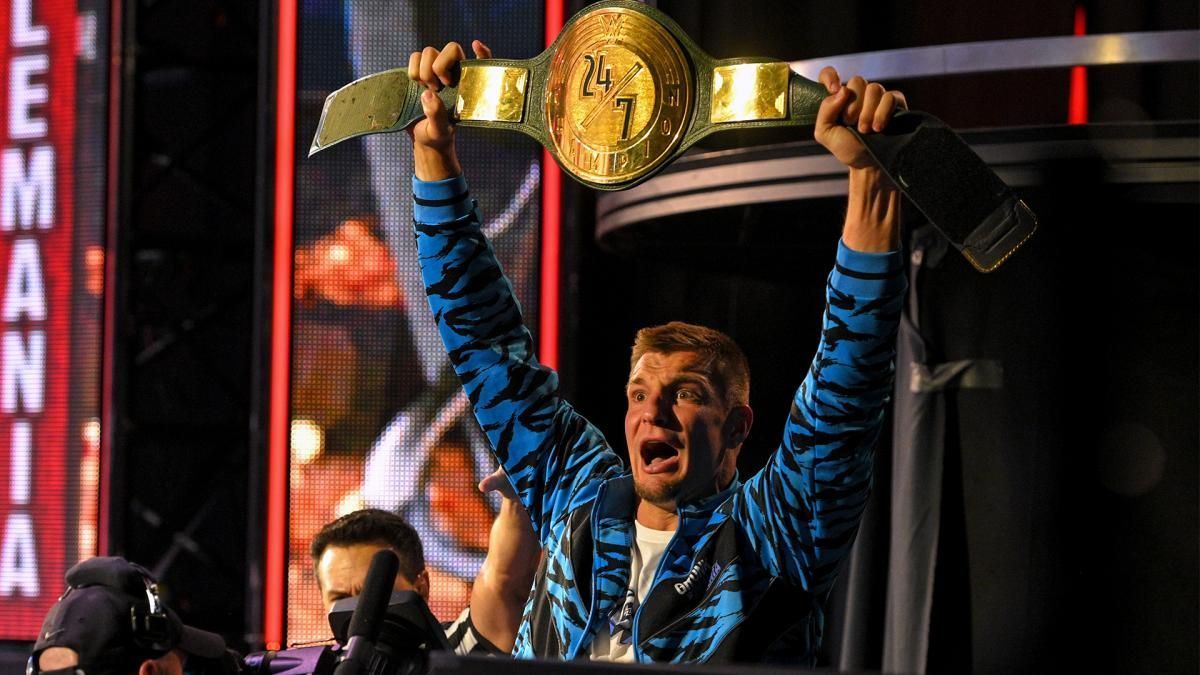 After his 58 days of holding gold, Rob Gronkowski‘s championship reign in the WWE has officially come to an end.

WWE aired a vignette Monday that showed Gronkowski walking into his backyard in Foxborough, Massachusetts. R-Truth, who has been the most prolific holder of the WWE 24/7 title since its inception in May 2019, won the belt for the 36th time by disguising himself as a landscaper and blindsiding Gronkowski for the pin.

The primary attraction of the WWE 24/7 championship is that it is to be defended anywhere, at any time, without warning.

Gronkowski won the 24/7 championship during the broadcast of WrestleMania 36 on April 5. A few weeks later, Gronkowski ended his NFL retirement and was traded to the Tampa Bay Buccaneers.

In addition to serving as the host for WrestleMania 36, which took place at the WWE’s Performance Center in Orlando, Florida, because of changes necessitated by the coronavirus pandemic, Gronkowski played an on-screen role at WrestleMania 33, when he jumped into the ring to help his friend Mojo Rawley win the Andre the Giant Memorial Battle Royal. 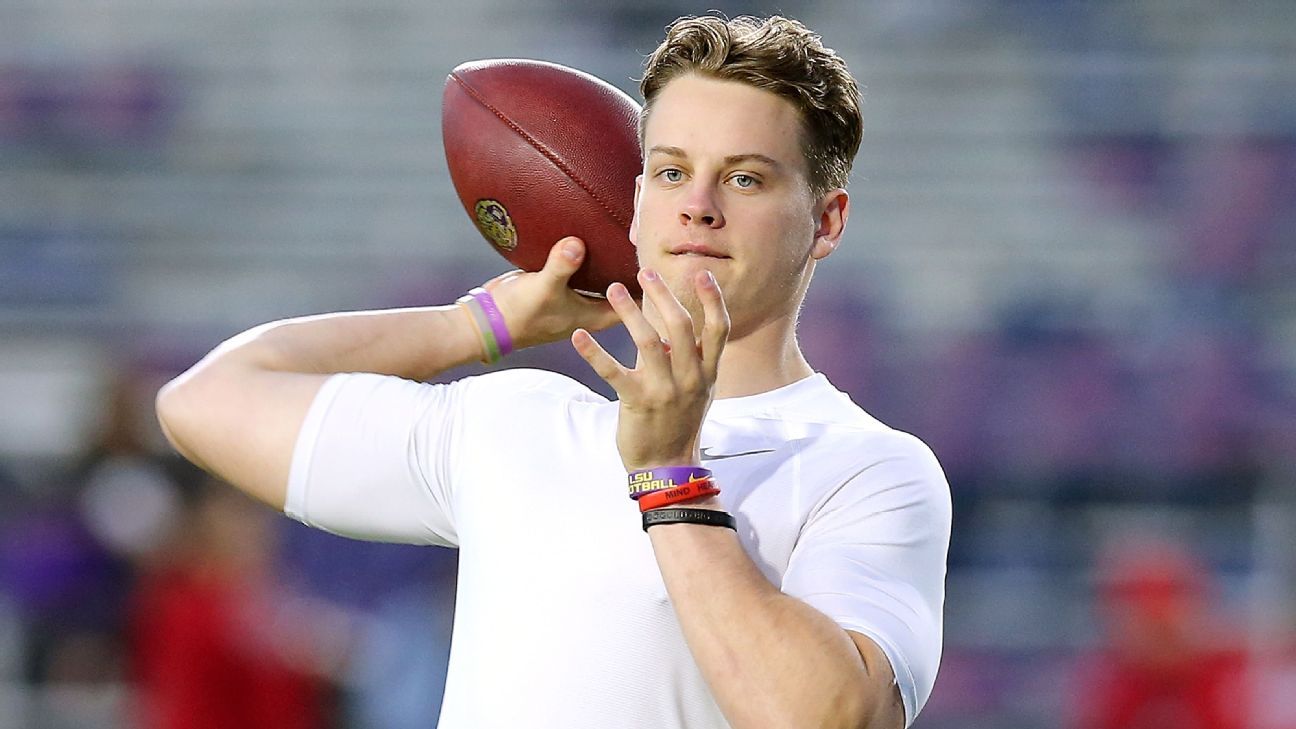 On Thursday, the Athens County Food Pantry and Foundation for Appalachian Ohio announced the creation of the Joe Burrow Hunger Relief Fund that will serve the region. Between the pantry’s donation and a dollar-for-dollar match from the FAO, the fund held $700,000 as of Thursday afternoon.

“I’m so grateful for the outpouring of support from people across the country around the food insecurity issues faced by those in my region,” Burrow said in a release. “The initial funds that were raised have had an immediate impact for people throughout Athens County, and I am honored to lend my support and voice to this new initiative that will ensure that impact lasts long into the future.”

The Bengals’ rookie quarterback has been vocal about the topic long before he led LSU to the College Football Playoff championship in January and was the top overall pick in this April’s NFL draft.

When Burrow won the Heisman Trophy in December 2019, he mentioned the issue of hunger in Athens County, where he spent the majority of his childhood. A fundraiser sparked by Burrow’s comments elicited roughly $650,000 in donations.

Karin Bright, president of the Athens County Food Pantry, said that once donations started to pour in, the organization wanted to not only address immediate needs but also look at any long-term impact that could be made. That sparked the idea for the endowment that was announced Thursday.

“It sends a very clear message that as a food pantry, we really are looking at things in a long-term way and we are looking at supporting this region,” Bright said.

According to a report released by the Ohio Development Services Agency in January 2019, Athens County had a poverty rate of 30.2%, which was the highest of any county in Ohio and doubled the statewide average. Per the Athens County Food Pantry, an estimated 12,900 people in the county — nearly one in five people — were food insecure before the spread of COVID-19.

In establishing the relief fund named after Burrow, Bright said there was a significant amount of discussion with Burrow’s parents, Jimmy and Robin, throughout the process that culminated with Thursday’s announcement.

Cara Dingus Brook, the president of the FAO, said the fund named after Burrow will help provide the level of support required to creating lasting change when it comes to food insecurity in the region. Brook said naming the fund after Burrow was “a fitting thing to do” because of the impact Burrow has made throughout the community.

“It has been a shot in the arm for everybody here,” Brook said. “So often in an area that has suffered from persistent poverty, with it can come a culture of diminished expectations.

“And so to see this success and this success to say to everybody else, ‘You can do it, too,’ it just totally embodies everything we as a foundation believe is going to lead our region forward and help solve some of these really generational issues, whether it’s economic issues or food insecurity.”

The new fund named after Burrow will be operated by the FAO and help the Athens County Food Pantry continue its efforts throughout Southeast Ohio.

“Being able to create this endowment is just another incredible way we’re going to be able to continue our work and support our region,” Bright said.

Philadelphia Eagles owner Jeffrey Lurie’s documentary film company, Play/Action Pictures, on Thursday announced the completion of its inaugural project, which has been in the works for three years: “The Meaning of Hitler.”

Lurie is an executive producer for the film. The threat of white supremacy is a topic that has been important to him for some time, and this is an example of his commitment to addressing social issues.

The announcement comes as Eagles wide receiver DeSean Jackson has received widespread condemnation for his social media posts, including an anti-Semitic message that he attributed to Adolf Hitler.

Jackson spoke with Lurie and general manager Howie Roseman — both of whom are Jewish — on Tuesday, a source told ESPN’s Tim McManus, with Lurie expressing deep disappointment about the social media posts. Jackson expressed a desire to educate himself and to work directly with the Jewish community, and his camp contacted the rabbi at Chabad Young Philly a short time later to discuss ways for Jackson to donate to and work with the organization.

The documentary, which uses the 1978 best-selling book of the same title as a guide, was filmed in nine countries over three years.

“We couldn’t be prouder that ‘The Meaning of Hitler’ is the first completed film made by our new documentary production company, Play/Action Pictures,” Lurie said in a statement. “I envisioned Play/Action to be a leading creative force for films that engage with the most crucial and challenging issues of our time. The rise of white supremacy and neo-fascism in the United States and the world over are among the most important and serious threats we face today.”

Lurie and his former wife, Christina, won an Academy Award in 2011 as executive producers of “Inside Job,” a documentary that examined corruption on Wall Street.

As the NFL plans for how to play through the coronavirus pandemic, the league distributed new game-day protocols to teams on Wednesday. As word spread, some of the rules — such as a ban on postgame jersey swaps — drew the ire of current and former players on social media, even though the NFL Players Association has signed off on the policy.

Here’s a roundup of what players are saying about the new rules that will take effect for 2020 preseason and regular-season games.

This is a perfect example of NFL thinking in a nutshell. Players can go engage in a full contact game and do it safely. However, it is deemed unsafe for them to exchange jerseys after said game. 😂🤣😂 https://t.co/fWefsUSVDc

I get off Twitter for a couple hours and I come back to them telling us no jersey swaps ….. It’s something every other day dawg 🤦🏾‍♂️

But we can tackle eachother? Cmon now https://t.co/lT63mvb0jO

So I can be tackled during a game but after I can’t swap jerseys ???

why won’t the NFL just say they don’t want players swapping jerseys lol! this wild… and what happens if they swap anyway?

What is stopping Jersey swap going to do? We already played in a whole game!! pic.twitter.com/S5XgYhs89Y

So we can tackle each other for 60min but can’t exchange jersey that takes 2 mins😂😂😂 https://t.co/5RKq54T0mH

🤣🤣🤣🤣 yooo so we could hit each for 60 minutes but we can’t switch jerseys, y’all look stupid