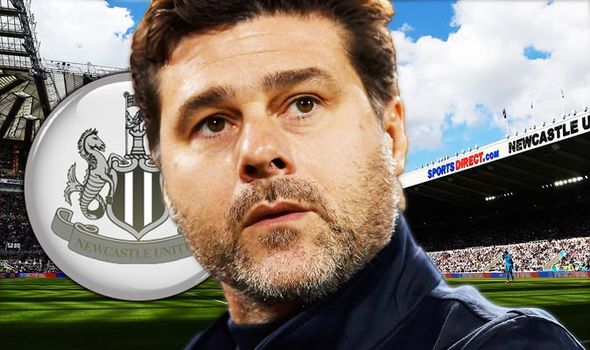 Mauricio Pochettino has teased a potential move to Newcastle after his gardening leave at Tottenham finally finished.

With football now having a return date to restart the season, attention is again turning to what will happen next, with the transfer window still set to open – albeit a little later than usual.

And it could be an interesting one, with many clubs being forced to sell and other unable to buy as Europe’s top clubs prepare for an almighty shake-up.

It’s all in today’s Rumour Mill…

End to end in nine seconds

Manchester United are one of the clubs expected to come out of the coronavirus pandemic strongest, thanks to their supreme wealth and long commercial arm built up over the years.

And that means they will be at the front of the queue for talent in the transfer window, even if clubs are forced to sell on the cheap.

According to The Independent, the club has Jadon Sancho and Jack Grealish in their ‘highest priority’ bracket of five players Ole Gunnar Solskjaer has spent the shutdown watching replays of with keen intent.

The surprising name in that group of five however is Manchester City’s Raheem Sterling, who United will stunning attempt to move for should their rivals’ Champions League ban get upheld, which would force a number of top stars to move on.

However improbable as it sounds, United are convinced that they will move for the England man quickly should they hear he is available.

Atletico Madrid have a history of their stars teasing a huge transfer for publicity purposes, you only need to see Antoine Griezmann’s ‘La Decision’, a show where he would announce his next move – like LeBron James did before joining Miami. He revealed he would be staying at Atletico, only to leave them for Barcelona a year later.

And now Saul Niguez is teasing something similar – although this time fans are a lot more sceptical.

On Monday (AEDT), the midfielder, who scored to help knock Liverpool out of the Champions League, tweeted: “New club, I’ll announce it in three days”.

So will it be a move to the Premier League, with the likes of Manchester United and Chelsea both interested?

Don’t get your hopes up. It looks like it will be something to do with Esports or a new sponsorship opportunity.

Barcelona and their fans will all be breathing a huge sigh of relief today as the clause allowing Lionel Messi to leave the club on a free transfer expired.

The six-time Ballon d’Or winner had a clause in his current deal allowing him to depart from the Catalan club for free, as long as he had informed the club before the end of May this year.

That means Messi, who has spent his entire career at Barca, will spend at least one more season at the Nou Camp before his current deal expires at the end of June 2020.

If a new deal is not agreed by January next year, however, he will be free to negotiate with other clubs over a possible transfer.

Mark Bosnich has said that former England manager Sven-Goran Eriksson should be at the top of the list for Melbourne Victory as the search for another new manager begins.

Victory confirmed last week that interim head coach Carlos Salvachua will return to Europe amid the ongoing coronavirus pandemic and will not return for the resumption of the A-League in July.

That left Victory searching for their third new manager of the season, following the sacking of Marco Kurz in January after just 13 games in charge.

And Bosnich thinks there is no one better suited for the job of restoring Australia’s biggest club to its former glories than Eriksson, who lists England, Lazio, Roma, Manchester City and Leicester City as but a few of the jobs he has managed in Europe.

“In terms of the coach, I think it’s very important and the first name that comes to my mind is Sven-Goran Eriksson,” Bosnich said. “It’s quite simple.

“He’s someone with a magnificent pedigree, great experience and somebody that won’t cost a great deal either at this moment in time, which is something you have to take into consideration. He’s a very wealthy man as it is.

“But in terms of his experience – what he’s done and where he’s been – what a man to bring in to steer the ship and put them back on the same course that they should be. This is the biggest club in terms of commercial and in terms of their fans in Australia.

“Success-wise, it hasn’t been the biggest club for a couple of years now, and it’s not good enough for a club like Melbourne Victory. They’re going to give their best as everyone will do during this little period, it’s going to be very, very different. But securing a head coach has to be a priority.”

The German soccer federation has defended its decision to assess whether four young Bundesliga players who made gestures in solidarity with George Floyd over the weekend must face sanctions.

The DFB also said on Monday that Jadon Sancho’s booking for removing his jersey to reveal a T-shirt with the demand “Justice for George Floyd” had nothing to do with the message — rather, the yellow card was issued because the 20-year-old England forward broke a rule that says players who celebrate goals by taking off their jerseys or lifting them over their heads must be booked for “unsporting behaviour.”

Borussia Dortmund teammate Achraf Hakimi, 21, who displayed the same message after scoring in the same game on Sunday, was not booked because he did not lift his jersey over his head.

The DFB control committee is looking into their gestures and those made by Schalke’s 21-year-old American midfielder Weston McKennie and Borussia Monchengladbach’s 22-year-old French forward Marcus Thuram to see if the four players broke laws that prohibit players from displaying “political, religious or personal slogans.”

McKennie was the first to make a statement when he wore an armband with the handwritten message “Justice for George” around his left arm on Saturday.

SOLIDARITY: Liverpool ‘take a knee’ for Floyd in touching show of support

Thuram on Sunday took a knee after scoring in Borussia Monchengladbach’s win over Union Berlin.

On Monday, after the DFB said it was assessing the players’ actions, Cologne forward Anthony Modeste became the latest to make a gesture after scoring against Leipzig.

He stood briefly with his right palm facing out and his left palm facing in to display the darker skin on the back of his hand.

Cologne said it was “a clear signal” against racism from Modeste.

Floyd, a handcuffed black man, died on May 25 after a white Minneapolis police officer, Derek Chauvin, pressed his knee for several minutes on his neck.

Three other officers were also at the scene.

Chauvin has been charged with murder and all four were fired.

Keller also praised both male and female players for taking a stand and showing their solidarity.

“I’m proud of them. I can completely understand the actions from the weekend. Nobody can be indifferent to what happened in the United States,” Keller said.

Former Mainz forward Anthony Ujah was just given a warning by the DFB in 2014 in regard to the ban on political statements when he displayed a T-shirt with Eric Garner’s name and the words “can’t breathe” and “justice,” in reference to Garner’s death after a police officer placed him in what appeared to be a chokehold.

Now playing for Union Berlin, Ujah on Thursday tweeted a picture of his protest from the time, but with Floyd’s name typed above in bold.

Floyd also said “I can’t breathe” before he died.

“If the DFB’s control committee wants to investigate, then I have to ask myself if we all have the same values,” Union sporting director Oliver Ruhnert said. “It’s about a global issue here: The no to racism.”

FIFA urged soccer competition organisers on Monday to apply “common sense” and consider not sanctioning players for solidarity with George Floyd during matches.

The recognition of the “depth of sentiment” over Floyd’s death came in a rare statement by FIFA telling the global game to show flexibility and not enforce laws of soccer it helps to set.

“FIFA fully understands the depth of sentiment and concerns expressed by many footballers in light of the tragic circumstances of the George Floyd case,” the governing body said in a statement.

“The application of the laws of the game approved by the IFAB is left for the competitions’ organisers, which should use common sense and have in consideration the context surrounding the events.”