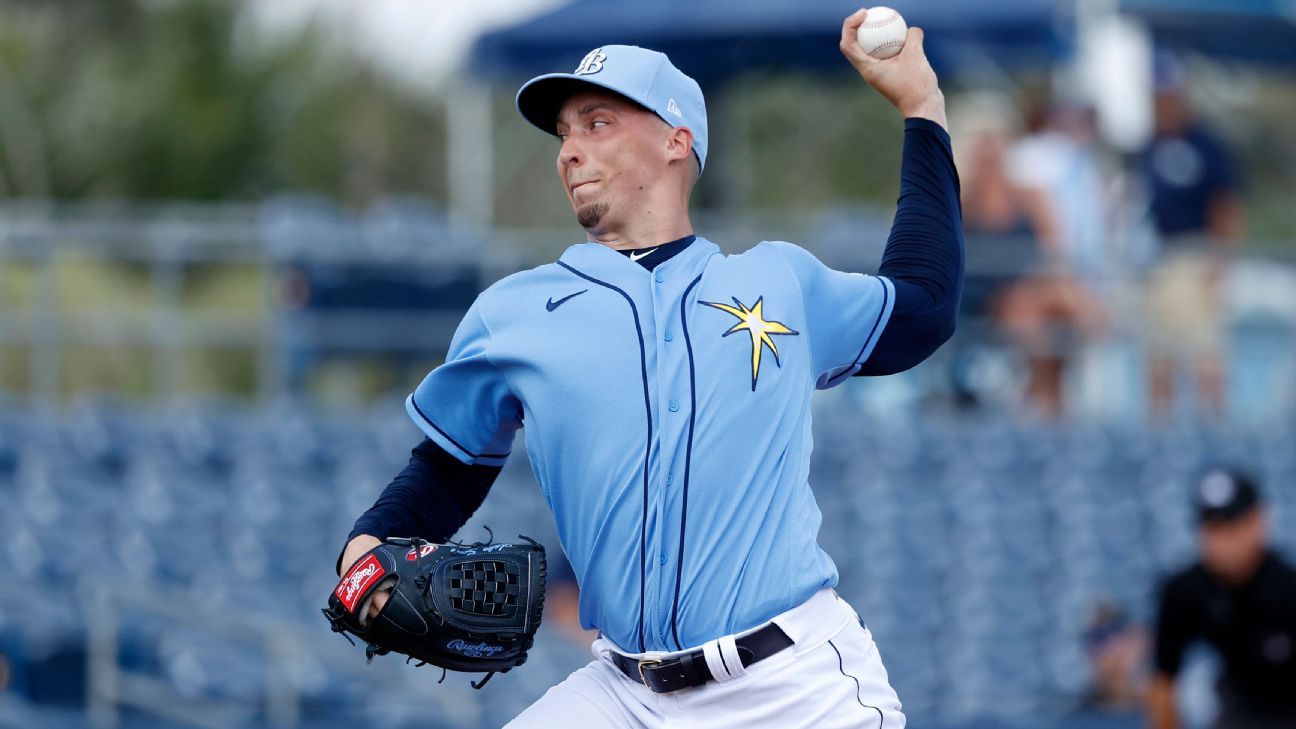 Spring is here and Eric Karabell misses baseball, so he is going to write about all 30 MLB teams over the next few months, covering myriad player values and his general thoughts for what he hopes will ultimately be a fruitful 2020 season.

Let’s continue our look into the 2020 season with the Tampa Bay Rays.

Top fantasy storyline: In 2018, left-hander Blake Snell won 21 games with a 1.89 ERA and a 0.97 WHIP. Last season, right-hander Tyler Glasnow posted a 1.78 ERA and a 0.89 WHIP over 12 starts. Wow, what a duo! They should both be top-10 fantasy starters! Well … Snell’s compromised left elbow necessitated a cortisone shot in March, and he would have missed the start of the season had it begun on time. Glasnow missed much of 2019 with forearm tightness, which is often a precursor to major elbow surgery. Sure, these fellows could be great, but do not assume a shortened season aids them.

Oh, and one more thing: When will Wander wander into the major leagues?

MLB, MLBPA agree on stipulations for return of 2020 season

Noah Syndergaard has Tommy John surgery, expected back in 2021 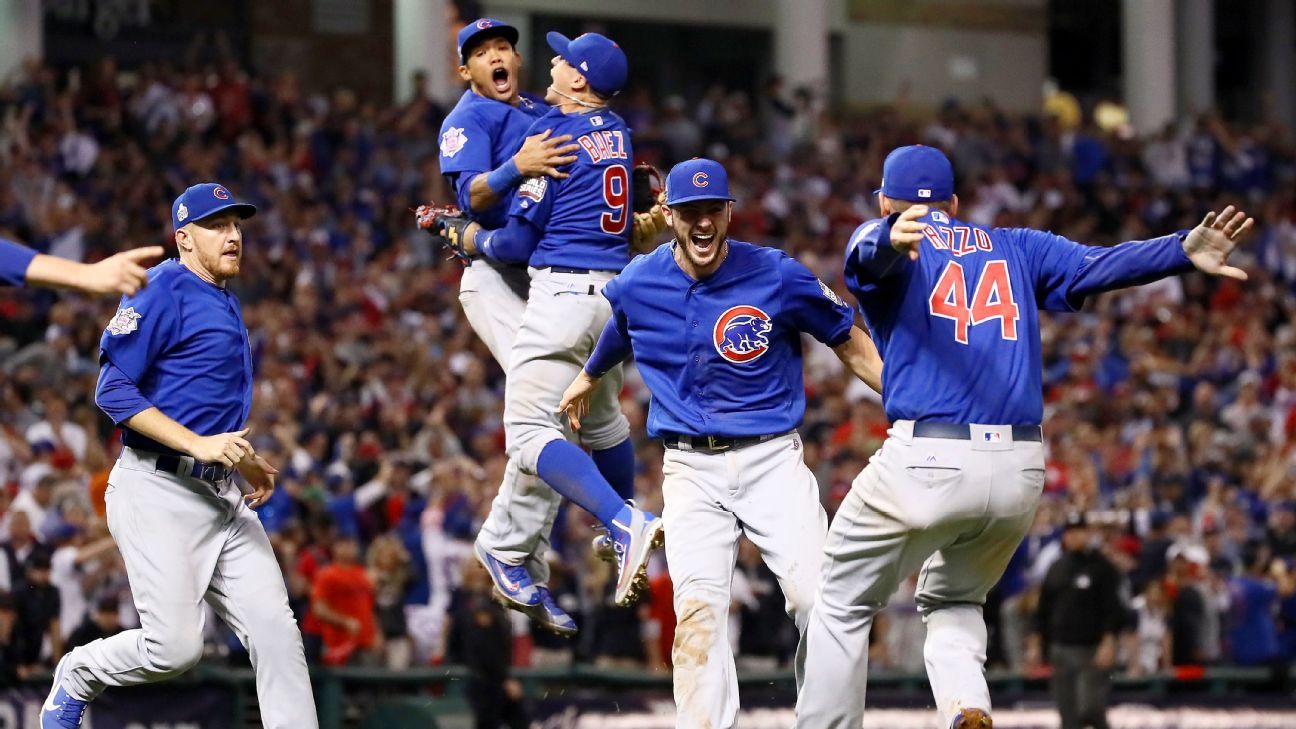 ESPN continues MLB Encore Tuesdays, a series of classic game broadcasts, this week at 7 p.m. ET with Game 7 of the 2016 World Series between the Chicago Cubs and Cleveland Indians at Progressive Field.

What you need to know: Given everything at stake, this has to be considered one of the most anticipated World Series games in history. The Cubs, in the World Series for the first time since 1945, had gone 108 years since their most recent title in 1908. The Indians, meanwhile, had most recently won in 1948, a 68-year drought that included the gut-wrenching Game 7 loss in 1997, when they led 2-1 in the ninth inning. That’s 176 total years of misery on the line in one game at Progressive Field. The Cubs were trying to become just the fourth team to win Games 6 and 7 on the road — though the stadium appeared to be half-full of Cubs fans.

Relive 13 of baseball’s finest pitching performances, from Don Larsen’s perfect game in Game 5 of the 1956 World Series to Roy Halladay’s no-hitter in the 2010 NLDS. Stream classic perfect games and no-hitters on ESPN+.

The Cubs had rallied from a 3-1 deficit in the series, winning 3-2 in Game 5 behind Jon Lester and 2 ⅔ innings of relief from Aroldis Chapman and 9-3 in a blowout in Game 6. Chapman, however, threw 20 pitches in that game and 62 over Games 5 and 6. Joe Maddon’s strategy, as we later learned, was to use three pitchers in Game 7: starter Kyle Hendricks, Lester on short rest and Chapman. The Indians started ace Corey Kluber, who was 4-1 with a 0.89 ERA in the postseason. He had been nearly untouchable in the playoffs but was starting for the second straight game on three days of rest.

Did you know? Dexter Fowler homered off Kluber to lead off the game, marking the first leadoff home run in a winner-take-all World Series game.

Photos chronicle Chicago’s comeback from a 3-1 deficit to win its first World Series in 108 years.

The view from the press box: Reporting from Cleveland for ESPN, Jayson Stark observed, “Madness. Mayhem. Ecstasy. Heaven. Pick whatever description works. The Chicago Cubs had won the World Series, and won it the only way they could.

You probably forgot he was in this game: I guess everyone remembers that David Ross played in the game — it was the final one of his career — and hit a huge home run off Andrew Miller in the sixth inning that gave the Cubs a 6-3 lead. What you might have forgotten is that the Cubs used three catchers in the game, and all three drove in a run. Willson Contreras started and hit a two-out RBI double in the fourth inning to give the Cubs a 3-1 lead. When Lester replaced Hendricks in the bottom of the fifth, Ross subbed in for Contreras, as Ross was Lester’s personal catcher throughout the season. In the top of the ninth, Ross led off with a walk and was replaced by pinch runner Chris Coghlan. Miguel Montero then replaced Ross behind the plate and hit an RBI single in the 10th that gave the Cubs an 8-6 lead.

One thing you might miss: You know the final out: a little dribbler to third base that Kris Bryant fielded with a big smile. You might remember that Michael Martinez, an obscure bench player, was the batter for Cleveland. What you might have missed is why Martinez was in the game. Martinez was on the postseason roster mainly for his ability to play both the infield and the outfield, and he had batted just three times all postseason (and struck out all three times). When Jason Heyward stole second base and went to third on an error on a 3-1 count to Javier Baez with one out in the top of the ninth, Terry Francona brought in Martinez to replace the weak-armed Coco Crisp in left field (Brandon Guyer actually moved to left field, and Martinez took over in right).

The Cubs failed to score (Baez struck out trying to bunt), and the game went to extra innings. When Martinez came up in the bottom of the 10th with a runner on first base and those 176 years hanging in the balance, Francona was out of position players — Martinez had to bat. As Sam Miller just wrote in his excellent piece on unsung World Series heroes, “The potential winning run came to the plate, and that hitter was Michael Martinez, the owner of a career .197/.241/.266 slash line, the worst hitter on either club and one of the worst hitters ever to bat in a World Series moment that mattered.”

Was Francona’s defensive move worth it? With the potential go-ahead run at third base, he wanted to bring in the better outfield arm, and I gave him credit for thinking of that in the moment, but really, what were the odds that Baez would hit a fly ball to left field (if Crisp were in the game) that would be at the exact right distance — not too deep, not too shallow — where a stronger arm would come into play? Were those odds worth the big drop in offense from Crisp to Martinez?

The Chicago Cubs found the perfect leader in the unique and zany Joe Maddon.

Aftermath: The Cubs became the first team since the 1985 Royals to rally from a 3-1 deficit to win the World Series. Ross called the home run off Miller the most shocking of his 15-year career. “I don’t know how I hit that ball,” he said.

Officials estimated that 5 million people showed up at the Cubs’ World Series parade and rally, making it the seventh-largest gathering in human history and the largest in U.S. history. Both clubs returned to the postseason in 2017, with the Cubs losing in the NLCS and the Indians, after a historic 22-game winning streak, losing in the ALDS. Cleveland’s title drought is now at 71 years, the longest in MLB. 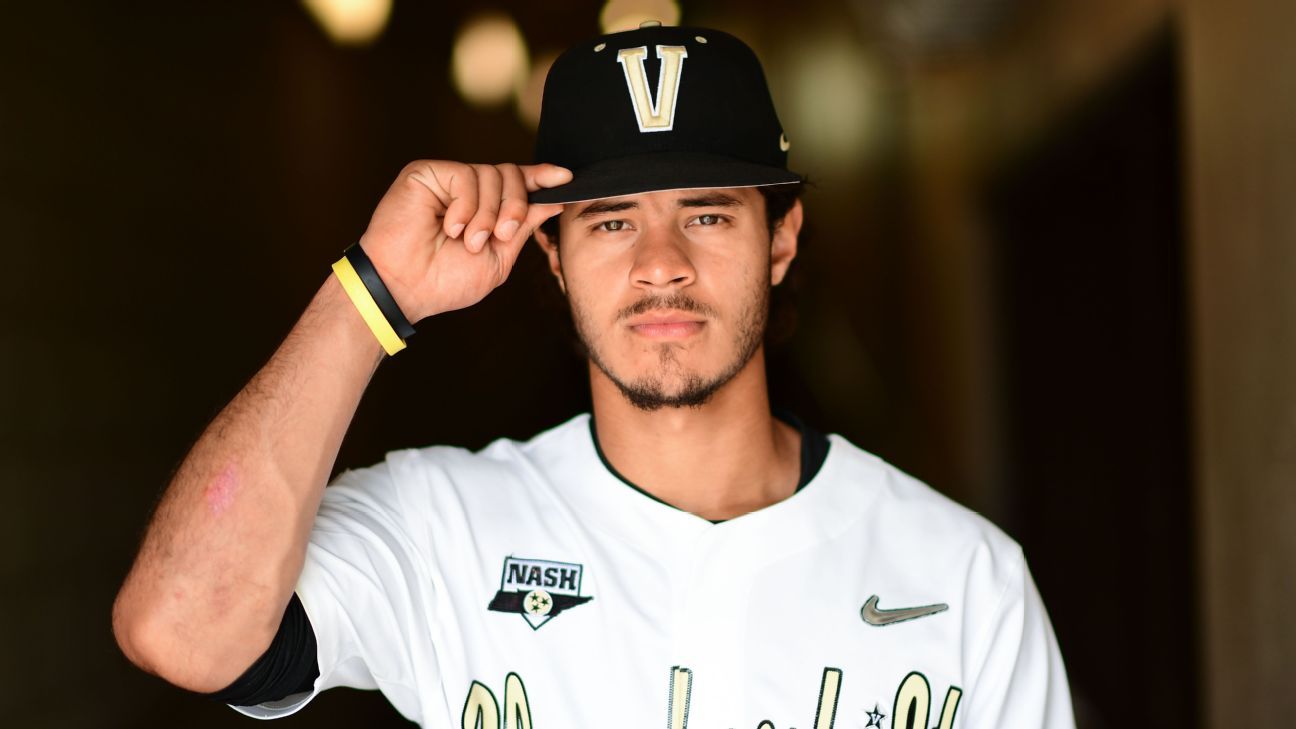 With the June 10 MLB draft two weeks away, team preferences and talent tiers are coming into focus, so it made sense to use the long weekend to pump some sources and put out another mock draft before we enter the final phase of preparations. I have a solid feel for where the top half-dozen or so picks stand right now, and rather than giving a binary “here’s the pick” sort of projection or just naming a bunch of options, the left side of my brain came up with the idea to be a little more precise in what I’m hearing from sources (hopefully with some accuracy as well).

For each of the first seven picks, I provide the percentages of who I think could be taken. Other than for the first pick (at which I’m hearing the Tigers are down to two options), the percentages don’t add up to 100 because I’m listing only those who I think have at least a 20% likelihood of being taken. I found that by the eighth pick, preferences become less clear, and there are so many possible scenarios that this approach loses its value. Hopefully by draft day, I will have a higher level of confidence in the back half of the first round. But I would guess that I will not. Maybe I will next year, when things will have (hopefully) gotten back to normal. 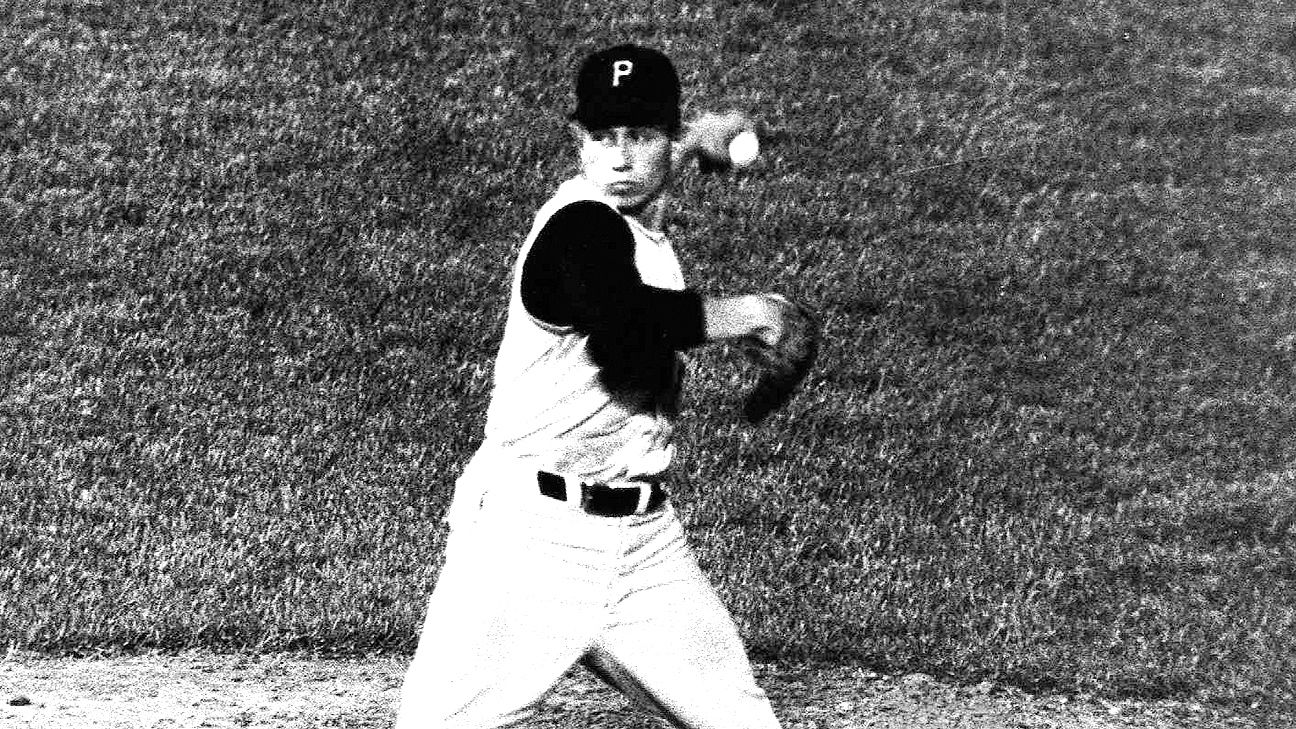 ON THIS DATE IN 1959, the Pirates’ Harvey Haddix pitched 12 perfect innings.

Thirty-six batters up, 36 batters down. It is one of the most incredible pitching performances in baseball history; there has been never been anything like it. It also is one of the most unappreciated performances because Haddix, at 33, pitching for his fourth team in four years, didn’t end up with a perfect game or a no-hitter, only a 1-0 loss in 13 innings.

Through 12 innings, Haddix had retired every Milwaukee Braves batter in order, a lineup that included Hank Aaron and Eddie Mathews. But the score was tied. Haddix and Pedro Martinez (June 3, 1995) are the only two pitchers to take a perfect game into extra innings. Pedro, then with Montreal, gave up a single to start the 10th inning that night in San Diego, then was pulled. The Expos won 1-0. In his, Haddix kept going. He struck out eight. The man they called “The Kitten” (Haddix was 5-foot-9, 170 pounds) was as neat as a cat, he was so efficient and precise.

“It was one of the best games I’ve ever played in, I couldn’t believe it was happening,” Pirates second baseman Bill Mazeroski said. “It was so different. I hardly got any ground balls. There were no difficult plays for anyone. The only hard-hit ball was a line drive [by Johnny Logan] to [shortstop Dick] Schofield. Everything else was routine. It was crazy. Harvey made it look so easy. I was in awe of what was happening. We knew history was being made.”

Mazeroski said that Haddix was so calm and cool on the mound and between innings.

“Harvey wanted to mix it up with guys on the bench during the game, but no one would even talk to him,” Mazeroski said with a laugh. “We all knew what the hell was going on.”

Milwaukee’s Felix Mantilla opened the bottom of the 13th by reaching on an error by Pirates third baseman Don Hoak, ending the perfect game. Mathews, who would hit 512 homers in his career, sacrificed him to second (one of 36 sacrifice bunts in Mathews’ career, fifth most for a 500-home run hitter). Hank Aaron was walked intentionally. Joe Adcock ended the no-hitter and the game with a home run, but in between second and third base, Aaron ran off the field, Adcock technically passed him on the bases, turning a home run into a double. But it was enough to win the game, and hand Haddix perhaps the most excruciating loss ever.

Haddix took it hard. He apparently wandered the streets of Milwaukee alone after the game.

“We were all so sad,” Mazeroski said. “We came into the clubhouse, we had a beer, and no one said anything. After about 15 or 20 minutes, we all decided, ‘Gee whiz, let’s go congratulate Harvey Haddix.’ Holy cow, what he did had never been done. It was just amazing.”

Other baseball notes for May 26

George Hill is spending the NBA hiatus on his 850-acre ranch with zebras, kangaroos and wildebeest