OWINGS MILLS, Md. — The Baltimore Ravens haven’t officially finalized a three-year, $30 million deal with defensive lineman Michael Brockers because of an issue with his ankle, a source confirmed to ESPN.

Baltimore is still hoping to sign Brockers but it could involve reworking the deal, a source added. An independent doctor expressed concern over Brockers’ left ankle, which he injured in the 2019 season finale. Due to the coronavirus, the Ravens’ doctors have been unable to examine him.

Brockers’ agent acknowledged that the coronavirus situation has slowed down the signing process, telling the NFL Network, “I’m very confident Michael will be announced as a Raven this week.”

Brockers, 29, reached an agreement in principle with Baltimore on March 16, the first day of the NFL’s negotiating period. But this remains the only deal the Ravens have yet to announce.

Without Brockers, the Ravens would be thin on the defensive line. Brockers was added to replace free-agent defensive tackle Michael Pierce, who has since signed with the Minnesota Vikings. Baltimore also traded defensive end Chris Wormley to the Pittsburgh Steelers this week.

Baltimore expressed interest in defensive tackle Ndamukong Suh on Wednesday before he reached an agreement to return to the Tampa Bay Buccaneers, according to the NFL Network.

The most recent reported time the Ravens had a medical problem with a free agent was March 2018, when Baltimore voided a four-year, $29 million agreement with wide receiver Ryan Grant after he failed a physical due to an ankle injury. Grant later signed with the Indianapolis Colts, and Baltimore brought in Michael Crabtree.

Brockers has been one of the more durable defensive linemen in the league. He hasn’t missed a game since October 2016, starting 57 consecutive games.

The No. 14 overall pick in 2012, Brockers was one of the longest-tenured Rams and played a key role along their defensive line. He started all 16 games last season, making a career-high 63 tackles with three sacks.

In the 2019 finale, Brockers hurt his ankle in the second half and was carted off the field. He told reporters after the game that he didn’t need surgery.

The Athletic was the first to report that the Ravens had concerns about Brockers’ ankle. 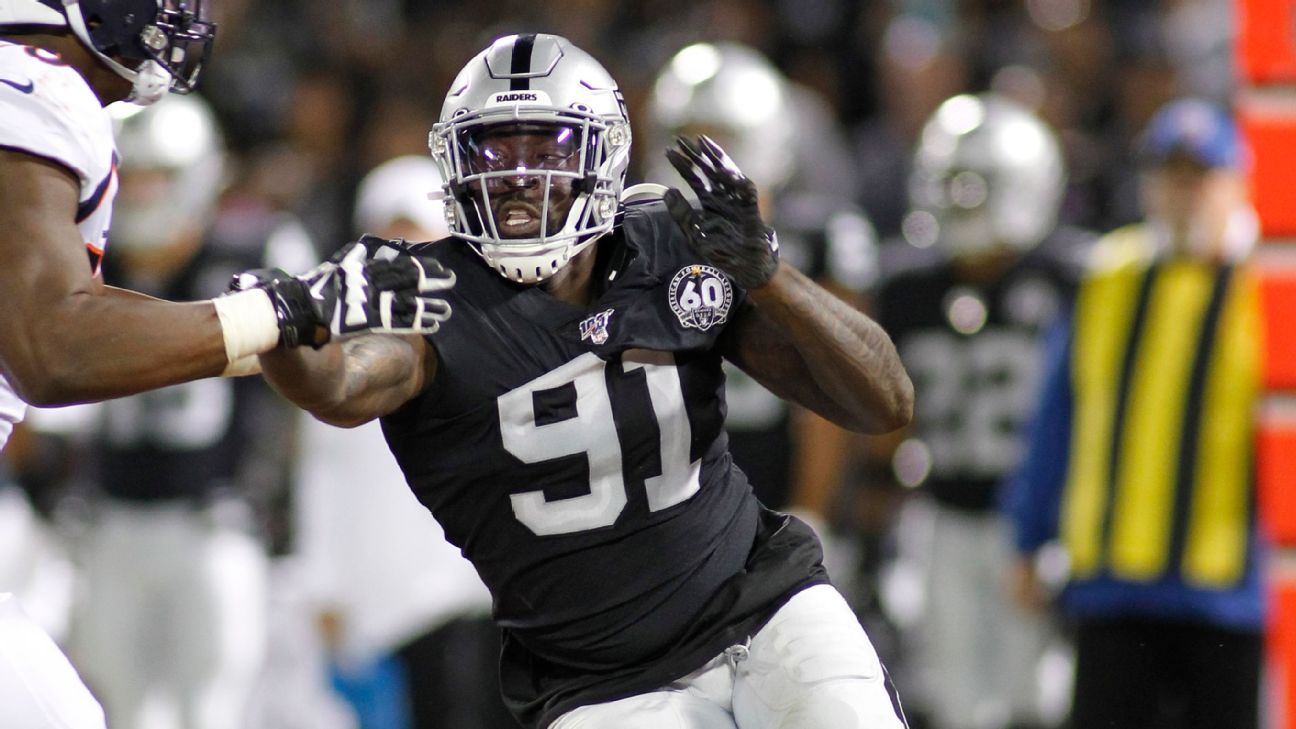 The Seattle Seahawks have agreed to terms with defensive end Benson Mayowa, another move to beef up their pass rush as Jadeveon Clowney remains on the market.

The Seahawks are not believed to be finished adding pass-rushers, whether that means Clowney or one of the other free agents who remain unsigned.

Mayowa, 28, recorded a career-high seven sacks and three forced fumbles on only 270 defensive snaps in 15 games last season with the Raiders. It was his second stint in Oakland, where he spent the 2014 and ’15 seasons. Mayowa began his career with Seattle as an undrafted free agent out of Idaho in 2013. He has also played for Dallas and Arizona, and he has 20 career sacks in 87 games.

Earlier in free agency, the Seahawks brought back another of their former defensive ends in Bruce Irvin as they try to improve what was one of the NFL’s least effective pass-rush units in 2019. Irvin had a career-high 8.5 sacks last season with Carolina. Clowney had three sacks for Seattle, and no Seahawks defender had more than four. The team finished the regular season with 28 sacks, tied for second fewest in the league.

The deal with Mayowa came together quickly on Wednesday, a source told ESPN. Earlier Wednesday, sources told ESPN’s Dianna Russini that Clowney’s asking price had dropped at least $2 million off the more than $20 million per season he had been seeking.

Titans general manager Jon Robinson said Wednesday that the team has been in touch with Clowney’s agents. 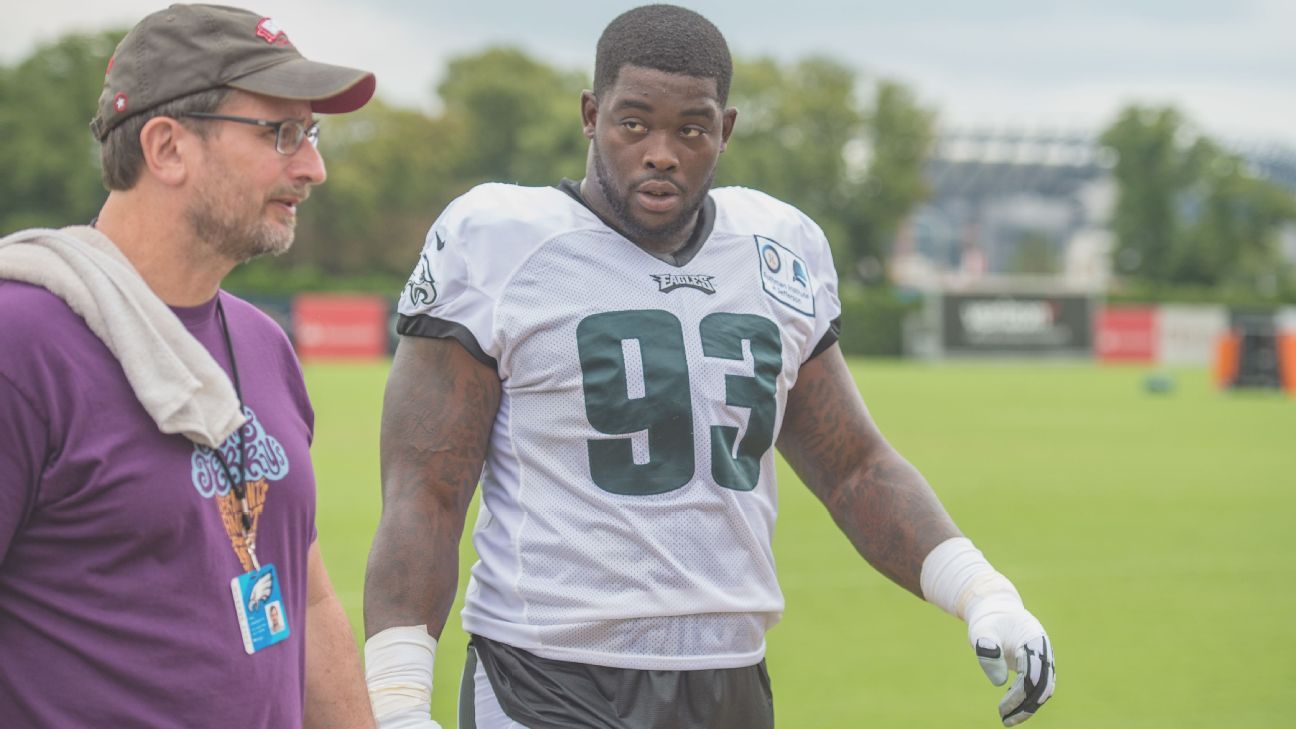 The Houston Texans have reached a one-year contract worth up to $3.75 million with defensive tackle Tim Jernigan, agent Bill Johnson told NFL Network on Wednesday.

Johnson told NFL Network that Jernigan will get $1.25 million guaranteed in his deal.

The Texans had a vacancy on their defensive line after losing defensive tackle D.J. Reader in free agency. Reader agreed to a four-year, $53 million contract with the Cincinnati Bengals earlier this month.

Acquired by the Philadelphia Eagles in a trade with the Baltimore Ravens in 2017, Jernigan teamed with fellow defensive tackle Fletcher Cox to help power a disruptive defensive line during that season, in which the Eagles won the Super Bowl.

He missed 13 games following surgery to repair a herniated disk in his back in 2018 and was limited to 10 games this past season due to a foot injury.

A second-round pick of the Ravens in 2014, Jernigan, who turns 28 in September, has 17.5 sacks, 47 quarterback hits and 29 tackles for loss over six seasons. 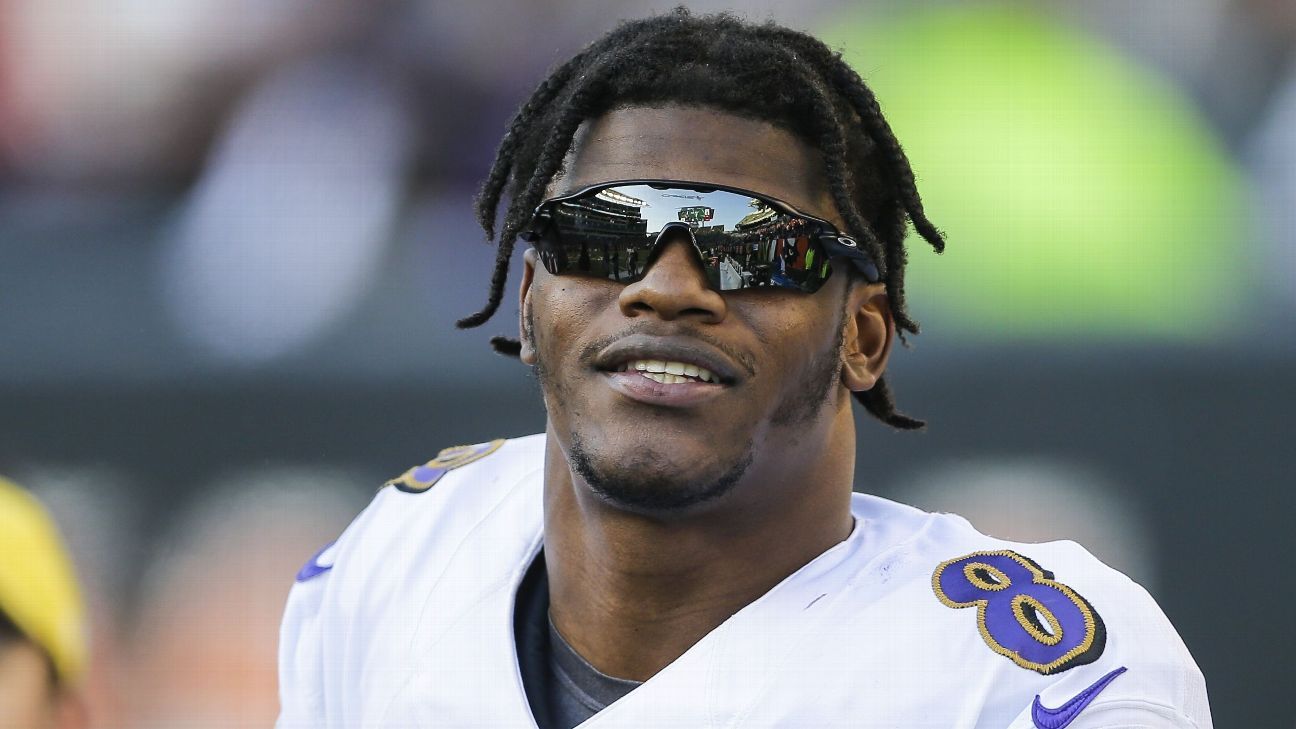 It’s not surprising that Baltimore Ravens quarterback Lamar Jackson is working out with Marquise “Hollywood” Brown this offseason. What’s created a buzz is Jackson tossing passes to his top wide receiver’s famous cousin.

Antonio Brown, a free-agent wide receiver, caught a 50-yard pass from the reigning NFL Most Valuable Player on a dead sprint in a video posted on Jackson’s Instagram account Wednesday. There was also a photo showing Jackson with his arms draped around Antonio and Marquise Brown posted on Twitter. The workout took place in South Florida.

This social media connection will cause many to speculate Antonio Brown is joining Baltimore. But the Ravens haven’t gotten involved in the free-agent market for wide receivers because it’s believed they feel the draft is the best way to improve that position group this offseason.

Antonio Brown, 31, hasn’t played in an NFL game since getting cut by the New England Patriots after a Week 2 victory in Miami last September. The seven-time Pro Bowl receiver is being investigated by the NFL under its personal conduct policy following a lawsuit filed by his former trainer, Britney Taylor, that alleges she was sexually assaulted by Brown on multiple occasions.

The Ravens are expected to upgrade their wide receivers in the draft, where they have nine picks, including five in the first three rounds. In Baltimore’s run-heavy offense, its wide receivers totaled 115 catches last season, which were 22 fewer than any other team in the NFL. The Ravens’ top returning receivers are Marquise Brown, Willie Snead IV, Miles Boykin, Chris Moore, Jaleel Scott and De’Anthony Thomas.

It’s unknown how many more times Jackson will hold these workouts. In an effort to limit the spread of the coronavirus, Florida Gov. Ron DeSantis issued a statewide stay-at-home order, which will last for 30 days starting Thursday at midnight.

Real Madrid transfer news: Gareth Bale, James Rodriguez, Luka Modric amid those who could be among 23-man cull