With no live Opening Day games Thursday because of the coronavirus pandemic, baseball fans are being offered a multitude of classic alternatives on television and other platforms.

With the season delayed until at least mid-May, Major League Baseball will air 30 games — one memorable game for each franchise — on its YouTube, Twitter and Facebook pages.

The list includes Dave Roberts’ series-shifting stolen base for the Boston Red Sox in Game 4 of the 2003 AL Championship Series, the Chicago Cubs ending their championship drought in Game 7 of the 2016 World Series, and perfect games by Felix Hernandez and Mark Buehrle.

TOKYO — The Japanese professional baseball and soccer seasons will be further delayed as the country grapples with the outbreak of the coronavirus.

Japanese professional baseball had aimed to open its season on April 24 after previously pushing it back from March 20.

After a meeting Friday of a joint coronavirus task force established by the NPB and soccer’s J-League, Japanese baseball commissioner Atsushi Saito said there was no option but to postpone opening day again.

“Unfortunately things are getting worse now,” Saito said. “We’ll have a meeting with all 12 teams, but it appears like we’ll have to be prepared for an extension [to our postponement].”

After briefly starting in February, the J-League’s first and second divisions suspended play later in the month.

J-League chairman Mitsuru Murai said it would be difficult to go ahead with the planned re-start of the first division on May 9.

“I think it’s unrealistic to say that we can hold the games as scheduled,” Murai said.

A number of NPB and J-League players have been infected with the new virus.

On Tuesday, Japan and Vissel Kobe defender Gotoku Sakai became the first player from the J-League to test positive for COVID-19. That followed last week’s announcement that three players from the Hanshin Tigers, of Japan’s professional baseball league, had also tested positive.

The new coronavirus causes mild or moderate symptoms for most people. For some, especially older adults and people with existing health problems, it can cause more severe illness or death.

Tokyo confirmed 97 more cases on Thursday, the largest single-day number of infections yet in the capital. Japan has recorded more than 2,600 cases of COVID-19 and 63 deaths from the disease. 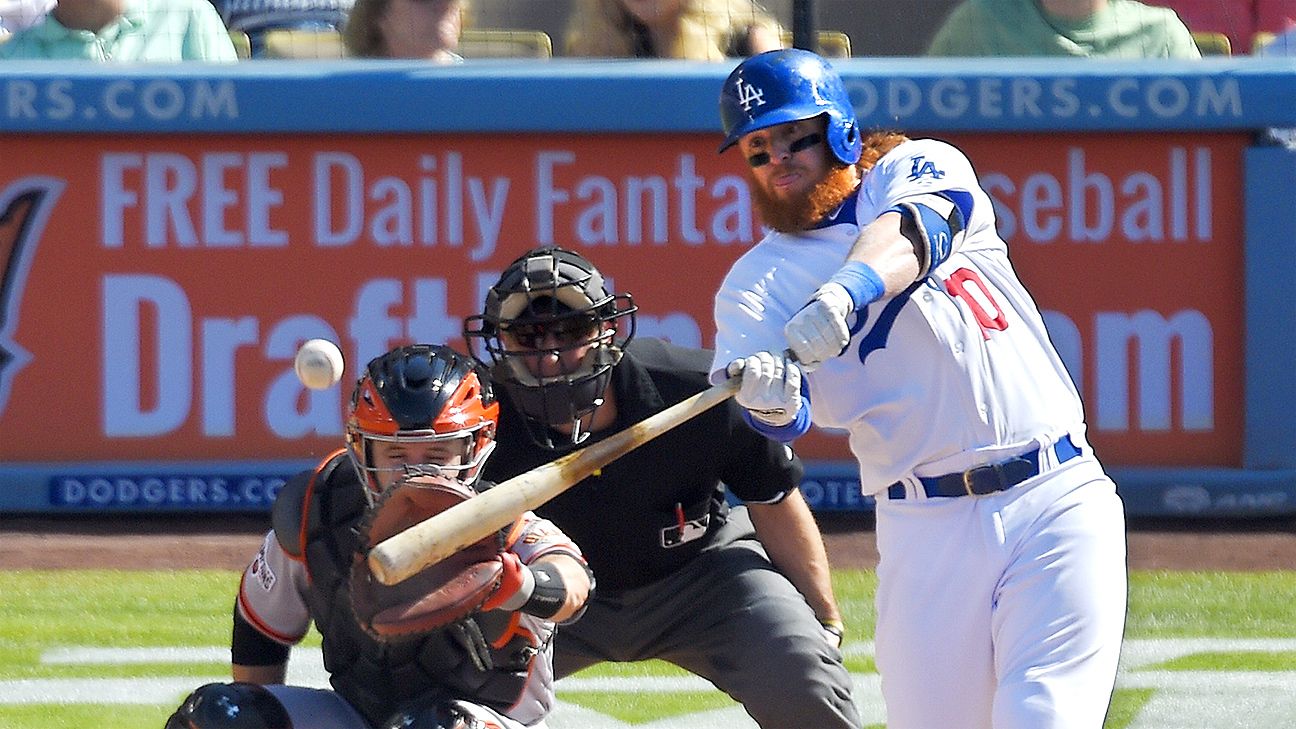 Los Angeles Dodgers slugger Justin Turner has a lot of time on his hands these days, and has come up with a novel idea for deciding extra inning games once the baseball season starts back up.

Taking a cue from the NHL’s shootouts, Turner suggested that baseball go to a home run derby if a game is tied after 10 innings.

“Instead of playing 17 innings, you get one extra inning, you play the 10th inning, and no one scores, then you go to a home run derby,” Turner said Wednesday on Spectrum SportsNet. “You take each team’s three best hitters and you give them all five outs and see who hits the most homers.”

“You know, you wanna keep fans in the stands until the end of the game,” he said. “I know when I go to hockey games, I actually enjoy watching shootouts. That keeps me in my seat, so maybe a home run derby will do that as well.”

Turner went on Twitter to expand on the idea Thursday, saying the suggestion would just be for this season, when baseball is looking for ways to get as many games in as possible in a season truncated by coronavirus.

He also said that a coach would throw pitches during the derby, so overworked pitchers would get a break.

Turner noted that “everything is on table,” when baseball comes back– multiple double headers a week, seven-inning doubleheaders, extra inning rules, roster expansion.

“It’s about getting creative,” he said.

Turner might have a hard time breaking into the Dodgers top three, with MVPs Cody Bellinger and Mookie Betts at the top of the order.

But the big redhead has shown a flair for dramatic home runs with the Dodgers, including a three-run walkoff against the Chicago Cubs in Game 2 of the NLCS in 2017. He hit 27 for the Dodgers last season. 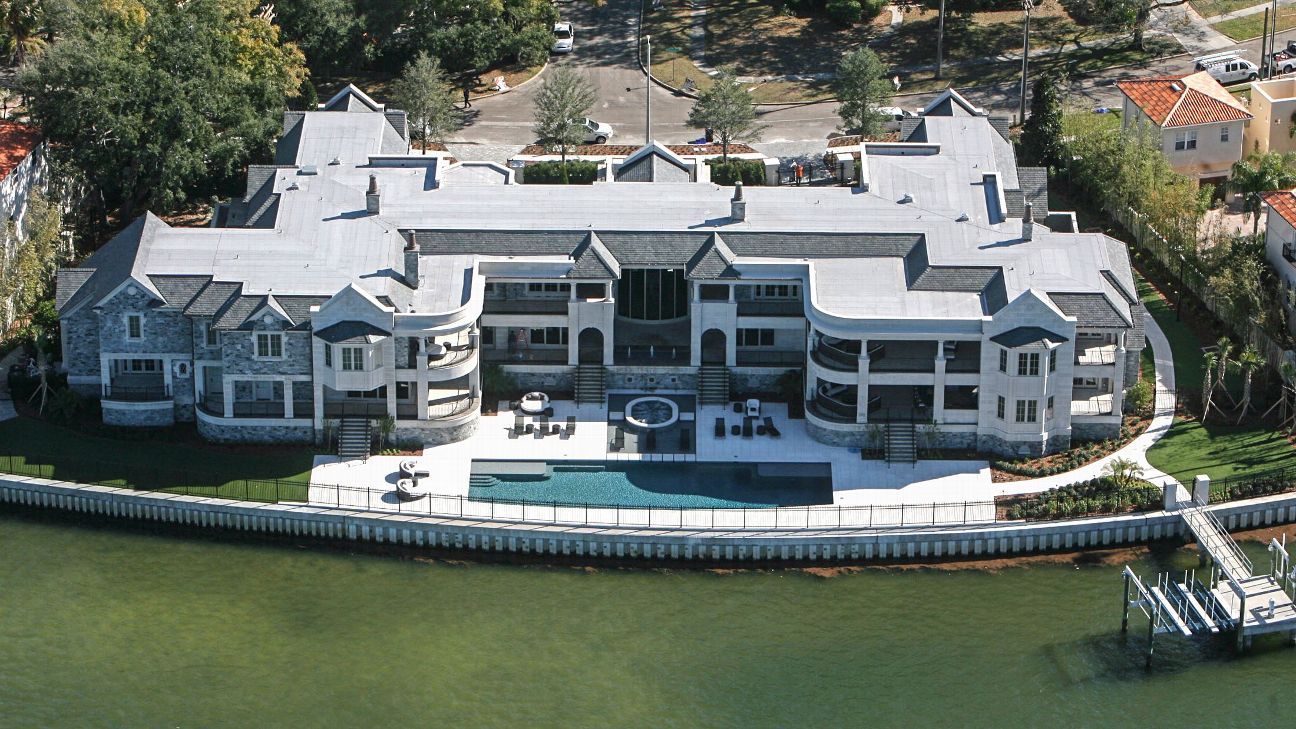 World Series wins? There are five.

With quarterback Tom Brady moving to Tampa after signing with the Buccaneers, he needed a place to lay his head. Former New York Yankees shortstop, current Miami Marlins chief executive officer and part owner, and Tampa resident Derek Jeter was there to help.

Like a sports royalty version of MTV Cribs, with gift baskets galore, here’s what happening at 58 Bahama Circle in Tampa.

It’s the largest house in Hillsborough County with 30,000 square feet, seven bathrooms and nine bathrooms. According to the New York Times, it’s the size of an average Best Buy store.

The Davis Islands area of Tampa is man-made, built in the 1920s. Much of the original architecture is Mediterranean, but Jeter’s house clashes. It’s an English manor style home. According to Zillow’s estimate, it’s price is almost $6 million more than the average price in the neighborhood.

Brady and his wife Gisele Bundchen have two children together. There are enough bedrooms for them to have three apiece, leaving one for mom and dad. Though Jeter, who has two children of his own, might have some rules for his renters like no finger-painting or stuff stuck to the refrigerator.

One benefit, for the notoriously private Brady, is the fence. Photographers, nosy neighbors and passing boaters trying to get a glimpse at Jeter, drove him to build the 8-foot fence. However, one Davis Island resident, according to the Tampa Bay Times, challenged it. The city agreed with Jeter, so good luck catch a glimpse of Brady at the grill.


While Jeter, and now Brady, are certainly the most famous, and winningest athletes on the block, hockey might be the dominant sport of Davis Islands. Former Tampa Bay Lightning captain Vincent Lacavalier and current Lightning players Steven Stamkos and Victor Hedman also live there.

It’s got a boat launch, room for eight cars, a pool, a fireplace and even an elevator. So, what will it cost Brady, who just signed a two-year, $50 million deal with Bucs, be paying? According to Zillow, the rent estimate would be more than $44,000 a month. But, maybe Mr. November will give TB12 a discount.