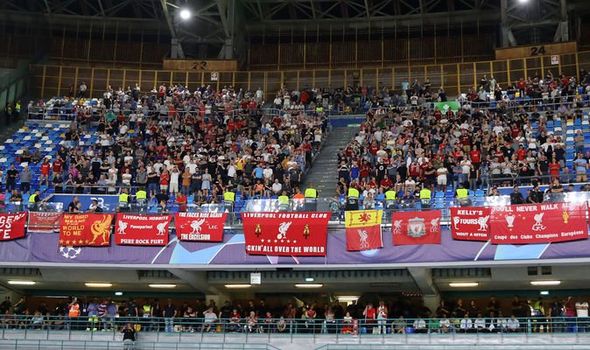 Liverpool chief Peter Moore is at a Naples hospital with a Reds fan said to have been hurt in an alleged ambush by Napoli supporters.

When the Premier League returns this month, Liverpool’s men’s team will almost certainly march on to secure its first league title in 30 years.

Meanwhile, its women’s side has been doomed to relegation from the Women’s Super League after the Football Association called a halt to the season.

The great shame for the footballing powerhouse is not just the relegation itself but the manner in which it allowed the team to wither on the vine.

Remarkably, despite Liverpool enjoying a record-breaking financial year in 2018-19, raking in £42m in profits, it only had 10 full-time employees on its list for the 2019-20 season.

Those 10 full-time employees covered five “players, managers and coaches” and five “administration, commercial and other,” according to The Guardian.

The publication reports the club pays its female players as part-time workers under the rationale that “full-time employees are those employed for more than 20 hours per week. The 19 members of the playing squad are semi-professional and as such are classed as part-time staff.”

No wonder the players have begun to leave on mass, with the words of exiting goalkeeper Fran Kitching saying plenty.

“I can’t wait to be enjoying the game I love again and being truly happy,” Kitching posted on Twitter. “I am excited to start my next chapter and also enjoy an environment which tests both players and people in the right way and allows them to thrive.”

Scotland international Christie Murray did not miss either.

“I’m looking forward to the next step in my career and the opportunity to be in an environment that challenges me, both as a person and as a footballer, and most importantly, to be able to enjoy what I love again.”

2/2 I’m looking forward to the next step in my career and the opportunity to be in an environment that challenges me, both as a person and as a footballer, and most importantly, to be able to enjoy what I love again. pic.twitter.com/x0u5kyqiIE

It’s not the first time players have left the club on mass either.

Aware of how things were being run at her old club she lured across seven players from Liverpool — Siobhan Chamberlain, Alex Greenwood, Martha Harris, Naomi Hartley, Emily Ramsey, Lucy Roberts and Amy Turner.

Liverpool’s negligence of its women’s team has finally come back to bite it and unsurprisingly the club is copping it on social media.

Liverpool Women relegated and it’s difficult to argue with that. The club just does not back the women’s team, a number of players have already left citing an environment that isn’t challenging or enjoyable enough.

They are Tranmere Rovers Women in reality, Liverpool haven’t included the women’s team in their new training ground. The women train and play at Tranmere, they just use the Liverpool name nowadays. A real shame.

This is a disgrace that must be sorted out. Liverpool’s relegated women underfunded and in disarray | Liverpool FC Women | The Guardian https://t.co/1wvcQjlcvx

What remains to be seen from here is if US owners FSG will respond to relegation by pumping funds into the team or allow it to deteriorate even further.

Cristiano Ronaldo is Instagram’s top earner after raking in $AUD25 million MORE from his posts than he does playing for Juventus.

According to a new report from Buzz Bingo, the Portuguese superstar has retained his crown as the social media site’s highest earner.

In comparison, Ronaldo was making $49.6m from his salary at Juventus, before any coronavirus-related pay cuts.

The five-time Ballon d’Or winner saw an increase of $6.4m from his Instagram earnings in 2019 by pocketing an average $1.6m per sponsored post.

Over the past year he promoted Nike, his fragrance CR7 Play it Cool and even an EMS training device called ‘Sixpad’.

Ronaldo’s longstanding rival Lionel Messi was beaten into second spot after his sponsored posts collected a total of $45.8m, or $1.1m every time he made one.

The Barcelona captain has money-making partnerships with Adidas and regularly posts pictures of his globetrotting lifestyle.

Model Kendall Jenner was the higher female Insta earner on the planet in 2020.

She banked a total of $38.5m over the year – despite charging less than HALF each sponsored post than her reality star sister Kylie.

The American had one of the highest number of advertised uploads in the past year with 38 as she banked an average $1m for featuring underwear brands such as Calvin Klein and skincare Proactiv.

Her younger sister Kylie, whose lucrative earnings from her cosmetic brand means she can command up to $2.2m per post, ultimately made slightly less at $29.5m.

India’s national cricket team captain Virat Kohli, who charges a comparatively low $420,000, made the top five due to the fact that he has the most sponsored posts of all celebrities at 56.

Sixth-placed David Beckham was once again the highest-paid British star on the rich list for his posts to his 63m followers.

The 45-year-old is such a hit on the social media platform he scooped a whopping $17.5m despite retiring over seven years ago.

In a list dominated by athletes, Neymar is the fifth-highest sportsman after netting $12.2m from the social media site this year with a reported average of $1.1m per paid post.

Interestingly Bayern Munich striker Robert Lewandowski has the second most sponsored posts of all celebrities at 47, four above Ronaldo.

Yet the Poland international’s lack of off-field exposure means he can only fetch around $138k per post and made just $6.5m for his troubles this year.

And despite being considered one of football’s most marketable stars, Manchester United star Paul Pogba is ninth on Instagram’s highest-earning athletes.

The $730k-a-week Belgian captain made $2.5m this year following his $220k fee for advertising to fans on social media.

This article originally appeared on the Sun

The LA Galaxy has parted company with Serbian midfielder Aleksandar Katai after his wife published “a series of racist and violent social media posts”, the Major League Soccer (MLS) team said on Friday.

In Instagram posts that have since been deleted, Tea Katai referred to Black Lives Matter protesters as “disgusting cattle” and urged violence against them according to media reports.

Black Lives Matter supporters have protested in cities across the U.S. since the death of George Floyd, an unarmed black man killed in police custody late last month, calling for police reform and racial justice.

The LA Galaxy released a brief statement on Friday announcing that midfielder Katai and the team had “mutually agreed to part ways” after “strongly condemning” Tea Katai’s posts when they became aware of them on Wednesday.

“The LA Galaxy stand with communities of colour, and especially the Black community, in the protests and fight against systemic racism, social inequality, bigotry and violence,” the club said.

The 29-year-old Katai, who previously played for the Chicago Fire and signed with LA Galaxy in December, has apologised for his wife’s social media postings.

The MLS season has been on hold since March, when the novel coronavirus outbreak froze much of the professional sports calendar, and earlier this week ratified a labour deal allowing play to resume in 2020.