FRANCE rocketed into its first World Cup final since 2006 with a stunning display against Belgium in the first semi-final in St Petersburg.

A perfect header from Samuel Umtiti in the 52nd minute broke the deadlock after a tense and scoreless first half.

Here were the major talking points from the thrilling clash, which saw Belgium fall short of its first ever World Cup final.

With big names like Antoine Griezmann, Kylian Mbappe and Paul Pogba dominating headlines throughout France’s campaign, the backbone of the Cup favourites sometimes gets forgotten.

That wasn’t the case for staunch midfielder Blaise Matuidi in St Petersburg on Wednesday morning (AEST).

The 31-year-old star put it all on the line for his nation late in the piece, copping a brutal blow in a contest with opposition midfielder Eden Hazard, which appeared to result in a concussion.

Matuidi looked to be seeing stars while sprawled on the turf but was surprisingly allowed to carry on playing for two minutes.

French officials finally saw the error in their ways and subbed Matuidi out for Corentin Tolisso after he collapsed in the 85th minute.

Fans applauded the veteran star’s courage in defence all night while also pulling up France for failing to realise the seriousness of the situation late in the second half.

Matuidi is the definition of a warrior

Matuidi has got to come off. Do a concussion protocol. Not looking good.

When Belgium sent five-time champions Brazil spiralling out of Russia in the quarter final, fans flocked to support the underdogs in its charge to make its first ever World Cup final.

While the Romelu Lukaku-led attack put France under the pump for the entire first half with dominant possession in the opposition’s territory, the men in red just couldn’t find a way through.

Coach Roberto Martinez lamented the result in a post-match press conference, claiming a single set play — which resulted France’s goal from a corner — was the only moment that divided the two nations.

“The difference sadly is a set play in a very close and tight game,” Martinez said.

“I couldn’t ask more of the players’ attitude. If you are going to have to lose such a match, which is bearable, it is the manner in which our players lost, pushing for everything, trying everything till the final whistle.

“We have to get rid of this feeling and finish on a high as that is nothing more than the players deserve, not to leave with a sour taste. Disappointed, of course, you can’t be anything else.”

They’re into the final, but that doesn’t mean every gun is firing.

France striker Olivier Giroud endured another horror half in his 2018 World Cup campaign, completing his seventh hour on the field without a shot on target as the bell rang for the break.

A misguided header from the 31-year-old left fans bemused as pressure mounted on the Cup favourites to score.

It’s nuts that Giroud has had 13 shots at this World Cup, but none have been on target.

Next highest tally with none on target is five.

He’s scoring in the final, isn’t he?

The difference is: Giroud is supposed to score goals. He is not good enough at doing his primary job: see that absurd miss. Felliani’s primary job is to be a foil, which he does brilliantly.

Belgium’s assistant coach and former French star Thierry Henry looked like a man on the edge as his side took on his old side.

The 40-year-old won the World Cup in 1998 with France but was plotting its demise in this morning’s semi-final clash.

Henry was spotted looking uneasy on the bench as France sunk its first goal to eventually take the match 1-0.

Talk about a win-win scenario.

England vs Croatia: Gareth Southgate not feeling the pressure ahead of huge clash

Jose Mourinho has taken a subtle swipe at former club Manchester United by snubbing them in his list of potential top four candidates.

The Portuguese boss, who was sacked by the Red Devils in 2018, has backed his own Spurs team and also thinks Sheffield United, Wolves and even Arsenal are more likely to qualifying for Europe’s elite competition.

How did Kamsoba miss that?

READY AND WAITING: Poch wants a Prem return. Which club will sign him?

THE SHAVEN ONE: The hilarious real reason behind Jose’s new look

The race for the Champions League is intensifying as Chelsea currently occupy fourth spot, two points ahead of Sheffield United, who have played a game more.

Mourinho’s Tottenham then sit sixth, four points adrift on 37 points, while Everton, Man United and Wolves trail in their wake.

But that didn’t deter Mourinho from including them in his top four candidates while completely ignoring Ole Gunnar Solskjaer’s side.

Speaking to Sky Sports, he said: “Wolves and Sheffield United are fighting for the top four, [the managers] they can say no, and I understand if they say no but the reality is that they are.

Ball boy attacked by a player

“Wolves bought an important player [Daniel Podence for £16.6m] to try to improve their situation.

“Sheffield bought an important player [Sander Berge for £22m], they beat their record in the market to try to improve their team.

“So it’s not just about Tottenham, Arsenal, Chelsea and Everton.

“It’s not just about us. It’s also about these two clubs who I have to say [are] fantastic.”

Chelsea host Manchester United on Monday night, with Ole Gunnar Solskjaer knowing his team cannot afford to lose if they want to make the top four. 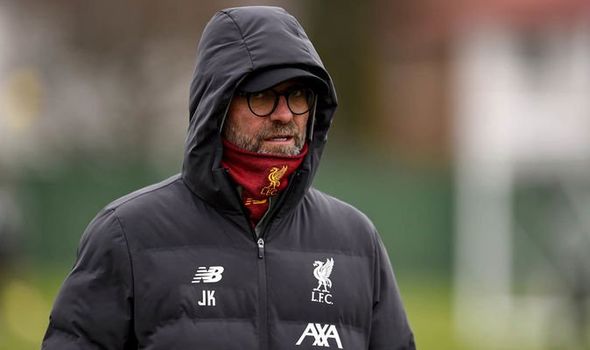 Liverpool have had their ticket allocation for the FA Cup clash with Chelsea reduced.

Jose Mourinho memorably told his players that shaving his head meant they were “ready to go to war.”

But this time the Portuguese found himself in a follicle battle of his own after falling asleep at the barbers.

How did Kamsoba miss that?

The Special One shocked fans this week by revealing that he had opted for a three crew-cut that had proved so successful at Chelsea.

After returning to his roots ahead of the 2006/7 season, the Blues went on to win nine of their opening 11 league games.

But Mourinho admitted it was a failure to stop himself drifting off in the hairdressers which means he repeating the ritual at London rivals Spurs.

“This time I fell asleep [in the barber’s chair] and when I woke up it was so bad that I said to him ‘bring the one’. Hopefully, it will grow back again.”

Although Mourinho confirmed that he does like the haircut, he may find it easier to stay awake should he be in the clippers next time, as he did during the 2012/13 season.

“It is nice and it is cheap. In a couple of months I will have hair again. Some people can’t do it.”

Mourinho has been busy during the Premier League’s winter break as he was pictured in the crowd to scout Champions League opponents RB Leipzig as they drew 0-0 with Bayern Munich.

Ball boy attacked by a player

Speaking to Sky Sports, he said: “It’s very important. I can see small details. Even the warm-ups. I can see what TV and video don’t give me. To see the warm-ups and to see what the players do individually.

“(Tottenham) players needed some days off. For their body and soul they needed a rest. But not for me.

“I think the best way to try and help the team is to work.”

Knicks, at $4.6 billion, listed as NBA’s highest-valued team by Forbes

Why Mauricio Pochettino is watching Brentford vs Leeds tonight